Being An Outspoken Trump Supporter Can Get You Hurt

It was a few months before the 2016 Presidential Election. Excitement, as well as tensions, were high. The news was full of arguments over the respective candidates. So-called experts were making their predictions.

Most of which turned out to be wrong.

I was living in a small town in Florida. I was in the panhandle, a decidedly conservative stretch of the state. You’ll find more Trump and MAGA bumper stickers than you would “I’m With Her” or “Feel the Bern.”

Yet even in this patriotic part of the country, I felt weird broadcasting my support for Donald Trump.

I had recently received my “Can’t Stump Trump” t-shirt from Swag by Milo. It was an incredibly soft, well-made garment. I put it on proudly and went about my day. Then I mistakenly drove to Wal-Mart.

The looks I got from certain shoppers was noticeable. Even in a conservative town, in a conservative part of the state, there were people giving me the stink eye. Nobody lashed out at me, or said anything, except for another man who complimented the shirt.

Although I left the store without encountering a problem, it was obvious my clothing garnered a lot of attention. People immediately looked at me and treated me differently, because I announced my support for a presidential candidate.

Imagine the reactions from people in larger cities, perhaps in cities where the people are known to get in your face?

It’s obvious that the election of Donald Trump as president of the United States has put people in two very different camps. And, as in most elections, there are people who resent his victory and are bitter over their defeat.

The amount of hatred being generated by anti-Trumpers is something we’ve never seen before. The level of ferocity and venom coming from opponents of the President borders on hysteria—in many cases it crosses that line.

I can say that no matter what, liberals get butt hurt when their side loses. While conservatives are required to just suck it up and get with the times, liberals are allowed to throw tantrums like that spoiled sibling of yours. The rest of the family has to behave, but little Johnny always gets his way. For some reason, he’s allowed to put up a fuss, scream, and cry, while everyone else has to bear it.

Democrats are still bitching about the 2000 election. They still talk about the controversy in Florida, dimpled chads, and even claim Bush didn’t deserve to win. Their irrational and impotent bitterness over a 17-year old election is excused or ignored.

Yet when some conservatives bitched over Obama’s win—taking issue over his alleged birthplace—they were branded as crackpots and loons. The media and many others gave them no quarter. We were all supposed to just accept the results of the election—like rational adults. Anyone who questioned it, or complained, were rightfully branded as idiots.

But once again, now that Democrats are on the losing side, they are allowed to complain, protest, post violent imagery online, and even riot over the results of a free and open election.

They rumor-monger and make the most ridiculous of accusations, simply because they refuse to accept that they lost.

This has resulted in reasonable, intelligent people acting like psychopaths. I’m not exaggerating when I used that word. Liberals today, particularly young ones, are acting crazy. How else can you explain the following story?

Jovanni Valle, 26, suffered a broken nose and a laceration on his cheek requiring 15 stitches after being hit with a broken glass bottle over his head July 7 at a Bulgarian bar called Mehanata on the Lower East Side at 3:30 a.m., the New York Post reported. (Breitbart)

Why did two of the other patrons attack this man? Because he was wearing a “Make America Great Again” hat.

He said he was dancing when his Trump hat fell off and a female bar patron “repeatedly” stomped on it.

“That’s enough, what are you doing?” Valle asked the woman.

“I hate this hat, I hate you,” the woman responded.

Wow. The woman’s boyfriend joined her in attacking Jovi Val, hitting him from behind. The attack left a massive scar on the man’s face. A surgeon who inspected his wounds noted severe fracturing of his nose and a serious blood clot under his cheek that needed to be drained. The surgeries needed to fix his face would add up to tens of thousands—if not hundreds of thousands—of dollars.

All because he wore a MAGA hat?

Think about what that woman did. When he dropped the hat, she stomped on it repeatedly. When he confronted her, she shouted, “I hate this hat, I hate you.”

Never have we seen this level of hate, all because of a campaign hat.

To many Americans, “Make American Great Again” is an inspiring slogan. It has transcended Donald Trump and his administration and has come to represent standing up for the values and beliefs that make America unique and doing our part in seeing our country thrive.

So why hate it? Because liberals have been indoctrinated by toxic politicians and an irresponsible, dishonest media. They have spread lies throughout the campaign, up until today, claiming that Donald Trump and his vision for this country would bring disaster and ruin.

Not once did the media look at his campaign goals honestly. Not once were they willing to look at his plans for our national security and economy objectively. Instead, they sowed fear that he’d round up Muslims, gays, and Mexicans and ship them off to prison camps. That he’d reverse the Supreme Court’s decision on gay marriage. Or that he’d enslave all women, denying them their basic rights.

I knew of grandmas who were panicking, believing that—although they are citizens and have lived here for decades—would be sent back to their homeland in the East once Trump won.

Was all this based on facts or evidence? Of course not. It was based on blatant lies and sinister manipulation by the left.

Even Trump’s more controversial statements did not come close to the hysteria and fear the liberal media and Democratic Party pushed. That did not stop them from spreading rumors and lies that the man—and his supporters—were modern day Nazi’s, bent on eradicating everyone that wasn’t white or male.

Despite his many supporters that were neither.

That’s how something as simple as a phrase, “Make America Great Again” could incite a stranger to scream in Jovi Val’s face, saying that she hated him.

Can you imagine anyone doing that to a person because they wore one of Obama’s “Hope” hats? Imagine that outrage in the media if a couple attacked someone at a bar, smashing a bottle in their face, because they were an Obama, or Hillary, or Bernie supporter? That couple would be ostracized from society!

The media was complicit in condoning the violence, because it was directed at a Trump supporter.

It’s why today liberals continue to look for flaws and excuses in Trump’s administration. They ignore the many gains he’s already made, going as far as twisting facts to justify their hate.

Recently I read tweets complaining that Trump’s plan was to let Obamacare implode, before repealing it and replacing it with something better. The libtard who wrote this called Trump a hack for doing so. Yet he conveniently ignored the fact that Obamacare is going to implode. It’s inevitable. That’s going to happen. More insurers will leave the program, leaving millions with no options.

That is a result of the ACA being a terrible piece of legislation. It has nothing to do with Trump. Now liberals are attacking Trump because he doesn’t want to save a terrible program they created.

The logical summersaults required to justify that kind of hatred boggles the mind. Their irrational fear and hatred of Donald Trump and his plans for the country are making them act and sound like crazy people.

Their acts of violence are pathetic and prove they don’t understand or believe in the American way. If you don’t like a politician, you can use sound argument and reason to prove your point. You can muster your community to support another person in an upcoming election. You can exercise your free speech rights to make your voice heard.

Liberals instead are using violence. Not just in Jovi Val’s case, but across the country. Why?

Largely because they claim that Trump forced them to do so. That his administration is so fascist and evil, that they have to resort to violence to get their point across. So once again they are blaming others for their actions.

The actions of the left in light of Trump’s win proves they don’t believe in the American way. They don’t believe in free speech and public discourse. Even when someone wins an election fairly, they have to look for ways to undermine it. It’s their way or no way; the people’s will doesn’t come into the equation.

There is some good news, for Jovi Val at least. A surgeon heard about his problem and decided to perform surgery pro-bono.

When Dr. Joseph Pober’s office assistant showed him a video of Valle getting smacked in the head with the bottle, Dr. Pober immediately wanted to see what he could do to help.

“This is something that had to be done. When I heard about this I was shocked,” Dr. Pober said. “It’s freedom of speech that is being attacked and assaulted. … I can’t imagine that anyone in America would viciously assault you, break your nose and slice your face with a broken beer bottle…”

The Park Avenue plastic surgeon performed the surgery July 14 that reduced the appearance of Valle’s nose fracture, drained his cheek of the blood clot, and re-sutured the “gaping” wound in his cheek. (Breitbart) 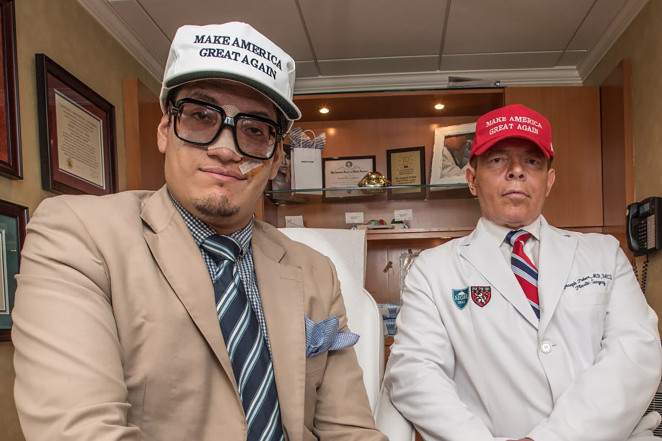 He’s already performed one operation, that would have cost $30,000. The man requires two more operations after that.  All of which Pober will perform for free.

But where does that leave us? Jovi Val’s story is not the first one, and it won’t be the last. In a city like New York, being an open Trump supporter is like having a target on your back. The angry, violent, irrational liberals of that region will make sure you have a bad day.

How is that American?