Apples to Oranges: Why We Shouldn’t Compare Current Polls to Past Election Results

Watching CNN’s lead up to the election has been pretty fascinating. Like a large portion of the general population, I’m not a fan of what CNN has become. Many of their previously centrist-leaning talking heads have exclusively moved to fear-mongering and Trump-bashing, while some of their already more left-leaning late-night hosts like Chris Cuomo and Don Lemon have gone from run-of-the-mill obvious Democrats to tunnel-visioned outrage commanders. I get the feeling that if Quebec separated from Canada, or England once again went to war with France, the Cuomo-Lemon double feature that night would either focus on the tragic Covid death of a 36-year old nail technician from Scranton, or some random fashion reporters’ questionable comments made earlier that day on AM Buffalo. Trump, as always, would be to blame.

But this article isn’t about CNN’s starting lineup or Trump at large. This is about election polling in general, and because we all love his magic board, we’ll go off of John King’s polling information and predictions. For those not familiar, John King has been with CNN since 1997 and has hosted shows like State Of The Union and John King, USA, but many know him as CNN’s election night magic map and numbers guy. He’s always been pretty level-headed and reasonable during his elections forecasting and polling but lately, he seems to have let his emotions get the best of him.

Like just about everyone at CNN, he has already awarded the Presidency to Joe Biden, based on some dubious polling numbers. For what it’s worth, just a day out, I’m not sure who the winner will be. But I know the current polls will differ greatly from the actual results, so assuming the election is over based on current polls is foolish.

My biggest issue: Every CNN poll has compared current polling numbers to the actual 2016 results, which for the most part show Trump polling much worse than he actually fared in 2016. Okay, cool. Can we maybe take a look at how Trump polled in 2016 versus how he’s polling in 2020? We all know the polls had Hillary winning in a landslide four years ago, so was 2016 an anomaly? Were the polls so far off in 2016 that we couldn’t possibly have a repeat? No. The polls were off by about as much percentage-wise in 2016 as they have been for each of the past 7 Federal elections — a difference of about 7%.

Why 2016’s polls versus actual election numbers seem so drastically different is that in many other election years the polls predicted the correct winner. However, that winner still often won by a smaller or larger margin than expected. Using 2012 as an example nationwide polling had incumbent Barack Obama winning Michigan by roughly 5 points — 50-45 in most polls the week prior to the election: 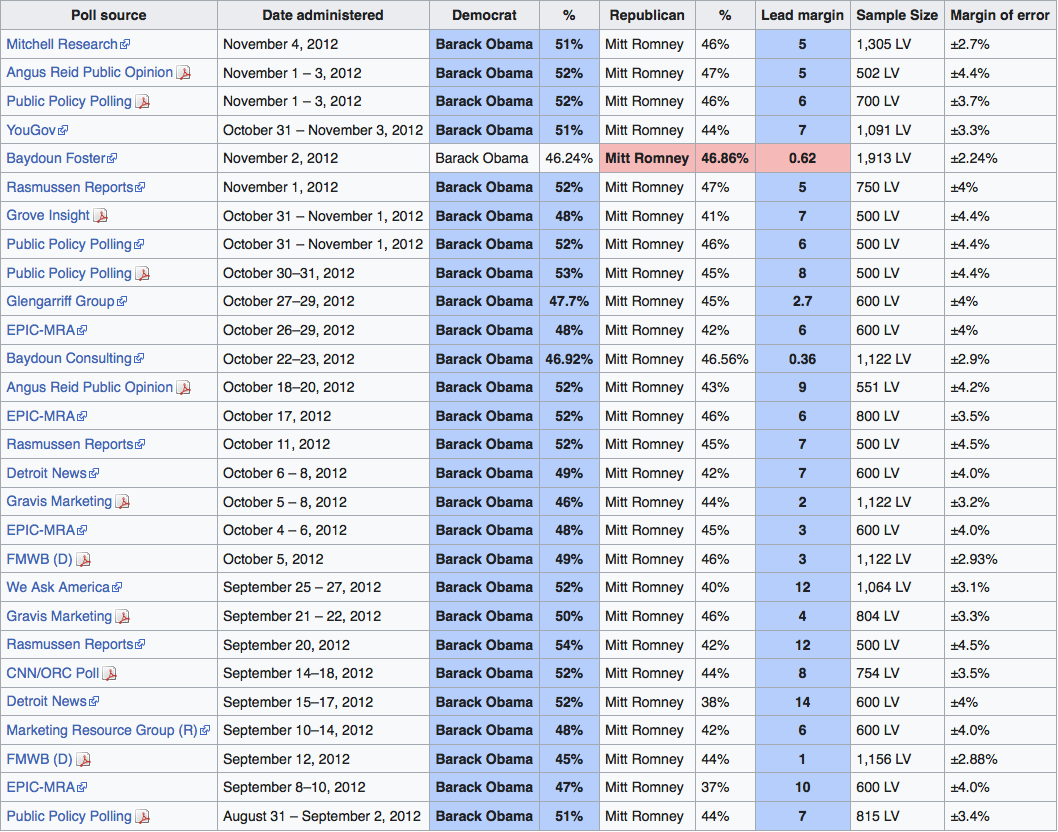 Obama of course did win Michigan, but by double the margin predicted: 54-44 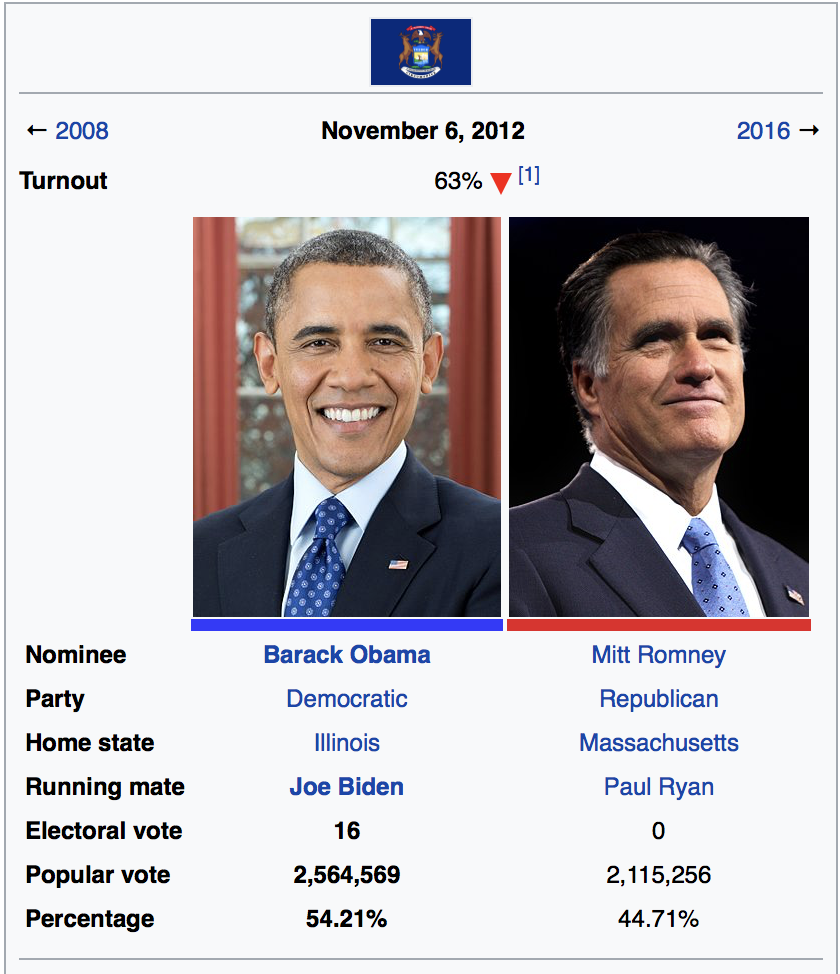 Moving on to 2016 we look at Pennsylvania where Hillary Clinton had a 3-4 point lead in polling on aggregate. That lead was closing in some polls, but zero of the main ones had Trump winning the state.

As we now know Trump took Pennsylvania by the smallest of margins 48.18% to Clinton’s 47.46%. You could argue that the pollsters that had Clinton narrowly winning were technically within their margin of error, but the state literally flipped from blue to red making the pollsters look that much worse. Michigan and Wisconsin likewise saw 4-5 and, in some cases, double-digit polling leads for Clinton turn into Trump victories.

The point here is that we aren’t seeing these examples being used by the mainstream media at all. All we continue to see is how Trump did in 2016 versus how he’s polling now, which definitely doesn’t look good for him, but it also clearly doesn’t provide the full picture either.

Trump was a long shot four years ago and appears to be well behind Biden this time around, with many pundits claiming he’ll need to pull off some sort of unheard-of turnaround in the final few days to retain his presidency. Clinton had leads in all of the states mentioned in this clip and still lost. Trump won those rustbelt states four years ago when he wasn’t supposed to, so the fact that he’s now behind in all but Ohio as I write this now doesn’t mean a damn thing. 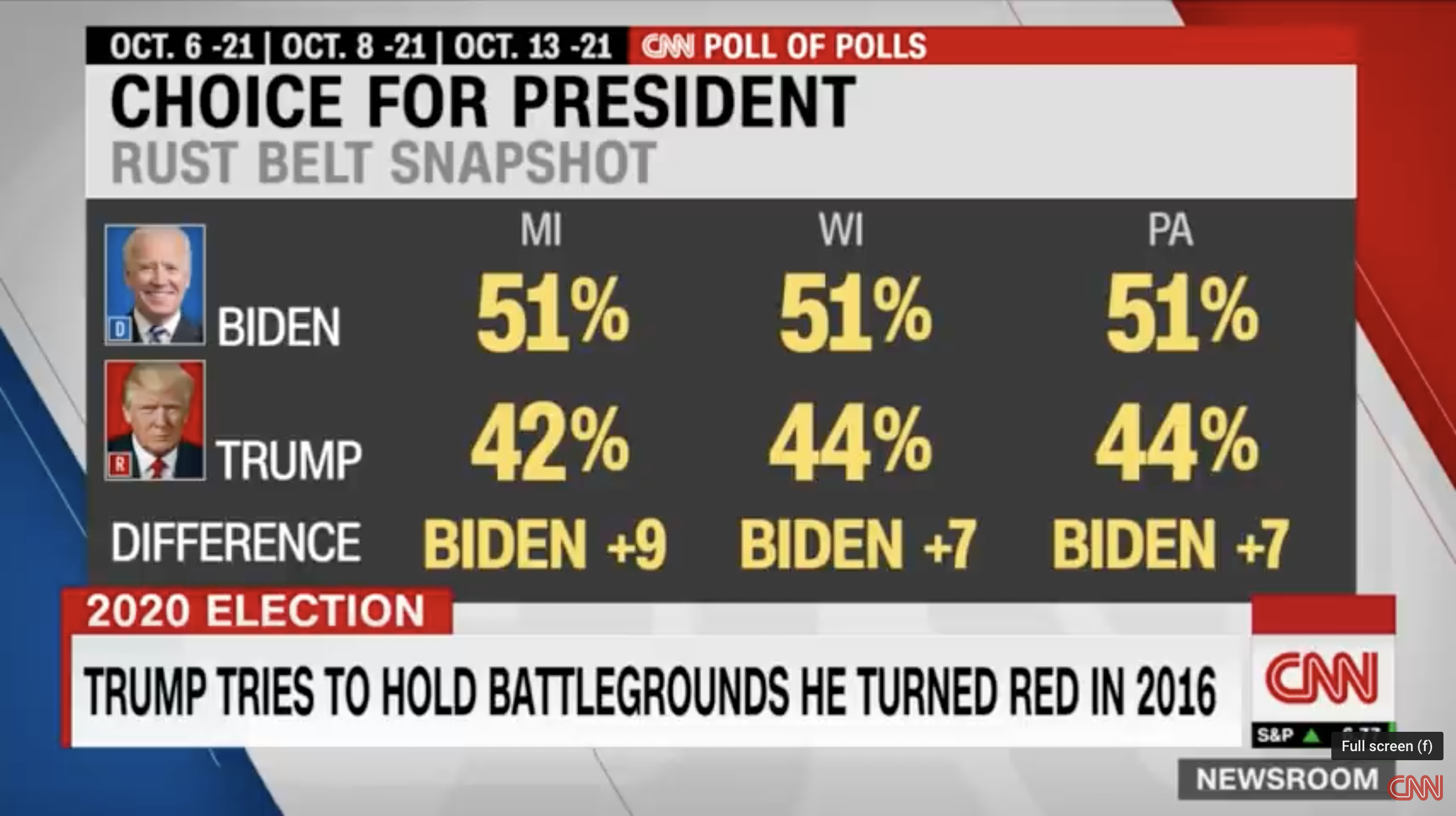 Here’s my lock of the week; Trump won’t lose any of the states mentioned by 8-10 points. That’s the sort of nonsense that gives opinion polling a really bad name. Hell, Trump will probably win one or two of those states. If Trump does somehow lose Michigan or Pennsylvania by 10 I’ll go on an all-soup diet for 10 days.

Now that I’ve covered what should have been the obvious faults with comparing opinion polls versus past results, we need to take a look at how some of these polling numbers come to be.

Lifelong Democrat Michael Moore all but predicted a Trump victory in 2016 because he knew that people were sick and tired of the status quo and that at least in his neck of the woods, in Michigan, blue-collar workers wanted to see real change even if it ended up hurting them in the future. Say what you will about his Tweeting and, let’s just say, extremely unorthodox and crude management of the country, Donald Trump knew how to excite his base and poke holes in his opposition. According to Moore and anyone with any common sense, the Trump vote is once again — probably even more so this time — being undercounted.

Although I don’t necessarily think that this has anything to do with the deep state conspiracies that Moore has mentioned, I do agree that if any voter is likely to lie or not give straight answers to pollsters about their voting choice it would almost always be those planning on voting for Trump. Moore has suggested that any lead you see for Biden in polls should automatically be cut in half to account for the always suspicious Trump crowd and the not-quite “Never Trumpers" too gun shy to vote blue. This makes a lot of sense to me and will certainly play a factor come the final tallies. The undecideds and those planning on voting for also-rans generally make up the difference in polling numbers never reaching 100%. The vote vultures shooting for bronze and 4th place ribbons won’t make much of a difference this time around but the undecideds I have a feeling will lean hard towards Trump.

Chances are if you don’t hate the man by now, you’ll be voting on one of two issues: the economy or COVID. The economy was in great shape before COVID closures (the “best ever” as Trump would no doubt say), so people may think Trump can drum business back up again. COVID is a different story altogether. Trump absolutely could have handled the pandemic better, but as we’re seeing worldwide now, this wasn’t going to be an easy victory for any POTUS. It’s wrong to point fingers at individual states and Governors and Mayors entirely just as it’s wrong to point fingers at Trump entirely. But there’s no doubt the messaging could have been better from the top. Trump has lost some votes here, but not as many as those Ridin’ with Biden may have us believe.

So poll trolls, past results, and secret Trump voters aside, there is one man that tends to project winners using his own formula.

Stony Brook Professor of Political Science Helmut Norpoth relies on his own Primary Model, a statistical representation of U.S. Presidential races dating back more than 100 years. He was one of only a few experts to correctly predict Trump's win in 2016. His primary model has successfully predicted 5 of the past 6 elections and 25 of 27 overall with the lone exceptions being the 2000 election that saw George W. Bush narrowly defeat Al Gore and the 1960 election that saw John F. Kennedy defeat Richard Nixon, both extremely close and full of perceived voting shenanigans.

“My first forecast was the 1996 election, the one where Bill Clinton was re-elected for a second term,” he said. “Predicting a Clinton win was considered a stretch at the time because he was pretty bad in his first term.”

Norpoth isn’t a fan of approval ratings. “That’s a poll number,” he said, “and I don’t use those. I think the primary performance of a sitting president is usually a proxy for that. But I don’t use any polling data or data related to opinions.”

Norpoth gives Trump a 91% chance of being reelected and shockingly has Trump winning 362 Electoral votes. To me, this is as far-fetched as the 99% chance Clinton had in 2016 and the 70% or so chance many see Biden as having this year. It’s going to come down to the wire. Biden will win the popular vote by 5 million and I see either Trump winning with a maximum 305 Electoral votes or Biden with a maximum of 311.

If I had to throw real money on it, I’d put my money on Trump because I think he’ll get the vast majority of the undecided vote, but I believe this is as close to 50-50 going in as Bush-Gore was 20 years ago.