If you’ve been following the news, you may have heard chatter about something happening on November 4th. Depending on the outlet, though, the reports range in tone from mild (“There are a series of protests planned for November 4th across the country”) to the extreme (“ANTIFA SUPERSOLDIERS ARE PLANNING ON BEHEADING ALL WHITE PARENTS ON NOVEMBER 4TH”). Before you ask, yes, that’s a real headline, courtesy of the estimable Gateway Pundit.

The uproar over November 4th started, predictably, on the right — as news of the planned protests made the rounds, a theory began circulating among conservatives that Antifa and BLM were planning some sort of mass attack on “patriotic” (read: white) Americans.

(First, let’s clear something up: Antifa, as is well known by now, believe that violence is an acceptable tactic in the fight against fascism. Black Lives Matter, on the other hand, is a nonviolent movement as a whole. Lumping a nonviolent organization with an organization that regularly engages in street fights is a conceptual leap that can only be made possible by a belief that black people are inherently prone to violence.)

The concerns from the right began trickling across social media, aided by a handful of Twitter accounts claiming to be Antifa chapters and broadcasting their intentions to attack white people everywhere they could find them. This was alarming, to be sure, but it was also extremely dumb for two reasons. First, the majority of Antifa are white; second, most would-be criminals don’t take to social media to announce a schedule for their crimes.

Of course, Antifa never actually made those claims — the Twitter accounts claiming to be Antifa chapters were actually being run by alt-righters and conservatives hoping to gin up controversy and make Antifa look like villains. Here’s a sample: 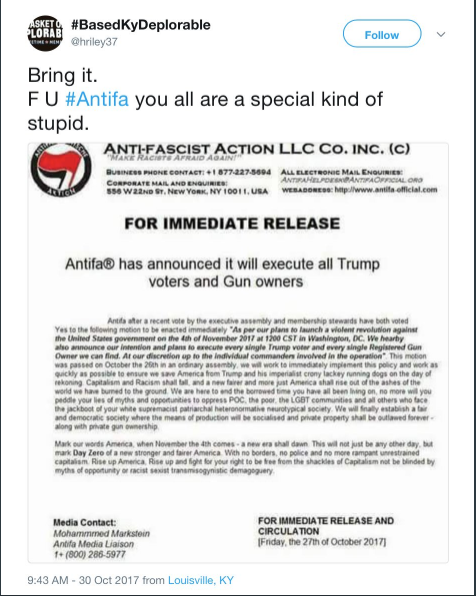 The press release format was a nice touch, but I really enjoyed learning that Antifa (who are also anti-capitalist) are simultaneously a limited liability corporation, a company, incorporated, and copyrighted. (Also a registered trademark, apparently.) And if that wasn’t enough of a hint, kindly direct your attention to the signature at the bottom:

Now, I am not an expert on naming conventions, so I can’t be sure, but I’m fairly certain that there aren’t three consecutive Ms in any name, let alone in the name “Mohammed”; moreover, while it’s certainly possible for someone to have an Arabic first name and a Jewish last name, I have to imagine it’s a pretty rare occurrence. A further clue can be found in their contact number, which is actually the number for Hewlett-Packard Investor Relations, and if all that wasn't enough, there’s still one burning question: who signs a letter threatening mass murder?

It would seem that any reasonable person would find all of this rather suspicious, but nevertheless, tweets like this kept circulating among the “Deplorable” crowd before they eventually made their way to leftist Twitter. Once there, leftists (rightfully) mocked this conspiracy theory and began sharing absurd joke tweets about Antifa supersoldiers.

Gateway Pundit later updated their article to claim that “Tom Bloke is…a thought leader of the far left,” a title retroactively bestowed upon him by… Gateway Pundit. You see, “Tom Bloke” is a random guy on Twitter who nobody had heard of until his tweet was used in the original article on Gateway Pundit. But, rather than admit he fell for an impossibly obvious joke, writer Lucian Wintrich decided it would be less embarrassing to name a random person a “thought leader of the far left.” (As it turns out, it was considerably more embarrassing. Go figure.)

Then there’s the infamous “NAMBLA” banner picture. If you’re not familiar, alt-right “journalist,” Pizzagate truther and certifiably-insane person Mike Cernovich was invited to give a speech for Columbia University’s College Republicans. In response, students organized a protest; at some point during the protest, someone — later revealed as an alt-right troll — handed protesters a banner and asked them to unfurl it. The protesters did, revealing a banner that read “NO WHITE SUPREMACY, NO PEDO BASHING, NO MIKE CERNOVIC” with a tasteful “NAMBLA” logo in the corner.

In the moment between the unfurling and the protesters realizing what the banner said and throwing it away, another student took a picture of the banner and tweeted it out in an effort to call attention to the alt-right’s attempt to derail the protest. Almost immediately, the picture was copied by the alt-right and tweeted out by some of its most prominent members. Those members included activist Jack Posobiec, who once pulled a similar stunt planting a “Rape Melania” sign outside the DeploraBall to gin up outrage; InfoWars contributor and noted agoraphobia sufferer Paul Joseph Watson; and Cernovich himself. (Cernovich, it should be noted, has a bizarre and, frankly, suspicious habit of branding anyone who disagrees with him as a pedophile.)

Naturally, the story quickly gained steam on the right — “Antifa” and “Pedo” is a match made in alt-right heaven. Eventually, Paul Joseph Watson made a video that clumsily attempted to ignore the fact that mere hours before, he was arguing about the dangers of Antifa. And yet, people still bought into it. In fact, some of the replies were still expressing outrage at Antifa (who weren’t even there — “Antifa” has become a weird and inaccurate shorthand for “anybody on the left”).

So to recap: the hoaxer — who had originally tried to use the photo to push a serious narrative that leftists are pedophiles — tweeted a video that admitted it was a hoax, effectively recanting his original narrative. But in the replies, there were people who still sincerely believed that the hoax was, in fact, real… despite the fact that they were replying to the tweet in which the hoax was admitted to be a hoax.

It is all so impossibly, hilariously stupid, and I have no doubt that come November 5th, we’re going to hear “reports” from Gateway Pundit and InfoWars that leftists torched a nursing home or something. And then, on November 6th, it’ll be revealed that it was actually an alt-right idiot who did it to “own the libs,” and the cycle will continue until the universe swallows us whole.

If you believed (or still believe) any of these “news” stories, please leave your address in the comments so I can send Antifa supersoldiers to your home to socialize all your food, replace the stuffing in your pillows with communism, and hang pictures of Lenin on your walls. (This is real  — I have the Antifa® LLC Co. © stationery to prove it.)