If you like your doctor, don’t look to the president if you want to keep your doctor. According to new Gallup data released last Tuesday, the stock market isn’t the only area hitting record numbers during the Trump administration: over 3.2 million American citizens have been left without any form of health insurance, the largest single-year decrease in coverage since the 2010 implementation of The Affordable Care Act (often nicknamed “Obamacare”).

Undoubtedly healthcare will be a defining issue plaguing the president and his party come 2018 and 2020. Pew Research studies heading into the 2016 general election found healthcare to be America’s 4th most vital issue, with around 74% citing this as a “very important” factor in securing their vote.

This leaves the critical eye of the masses on Republican politics regarding Obamacare, the policy they happen to be gutting under voters’ noses. It was the president and company who failed on delivering a “repeal and replace,” unable to secure the votes of both the staunchly libertarian freedom caucus and the more statist, pro-medicaid expansion RINO Republicans.

Such a defeat in Congress left the right-wing’s undermining efforts as a job for other bills, such as the recently passed tax cuts. Passed with a 33% approval rating — a negative if I’ve ever seen one — this Trump tax bill successfully managed a swift repeal of the individual mandate.

Once a healthcare method that was the Republican stance, evidenced through the comments of former Senator Bob Dole, the 2012 Republican candidate Mitt Romney and the right-wing think-tank The Heritage Foundation, this was what held the ACA intact.

If you have a healthcare plan, you pay your premiums and other requirements (which comes at a higher and higher cost every year), whereas if you don’t have a plan, you get fined about 2.5% of your total household income by the government (between $695 and $2,085 in 2017 adjusted for inflation).

The right-wing argument for the latter being unjust is sound, considering it’s a fine for not buying things you can’t afford or simply don’t want. It’s a fair case, and the Trump repeal does offer people of that mindset with economic liberty. At the same time, they must concede they are kicking the crutches out of an already flawed system, leaving the program unable to provide a funded safety net for the physically and mentally harmed. Democrats will understandably find irony in this. One can hardly blame a school shooting on mental health while depriving society of useful mental health treatment.

As The Hill points out, the biggest decline was among households with an estimated income of less than $36,000, the exact kind of lower-middle class that Trump swore to give relief with his campaign statements of “everyone is going to be covered” and “the government is going to pay for it.” This implies a recognition of the state, which implies a recognition of taxes to fund the government, which implies he’s gone back on his original stance of universal healthcare, provided publicly or privately, while coverage numbers plummet.

Another group that saw a significant coverage decline were people between the ages of 18 and 25. This is another blow towards the president’s credibility on youth coverage, telling CBS he was in agreement with former President Barack Obama on allowing children and young adults to stay on (their parents’) healthcare coverage; the caveat being they will be kicked off once they reach a mature enough age to enter the workforce.

As he was tapping his forehead like the infamous fucking Roll Safe meme, the president could have just said “you won’t have kids on insurance if their parents don’t have insurance”: 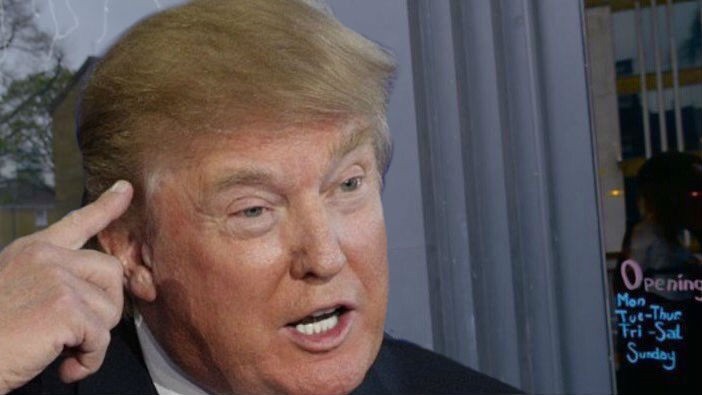 Under the Republican-controlled government, there have been significant advertising cuts for Obamacare outreach. Last year, an internal research memo from the Department of Health and Human Services found that these cuts to just advertising would leave between one and two million without the ability to enroll. This does beg a couple of questions. Why is it so complex to enroll that people, to the tune of millions, can’t do it or simply don’t want to?

Once again, red flags are raised about the president’s credibility on wanting everyone covered through government — a statement he can’t pawn away as “fake news” — and if Republicans have any policies that don’t result in coverage loses. Advertising works. There’s no doubt about that, and if anyone should be embracing the effectiveness of advertising, it’d be the elected commander in chief with a household name above large builds. He’s just not selling the product Republicans own — faults and all.

They owned the individual mandate policy in the 1990s. They own the four unpassed versions of TrumpCare, policies that had 13% approval ratings, which couldn’t get past all the levels of government they also happen to own.

The decline is their own and will be felt by the American voter if they live to air their disappointments.