2018 Midterms: Both Parties Hoping The Other Will Screw Up More

Once upon a time, not long ago, political parties actually tried everything in their power to win elections. Heck, on special occasions, they would do this by using the smart tactic of running unapologetically for populist beliefs on the left or right wing. However, with a reality star in America’s highest office, with a messy Republican party on all levels of government behind him, facing pathetic opposition from the Democrats, the 2018 mid-terms and following 2020 presidential race may be another case of idiocracy.

If Washington were a boxing match, with Republicans sporting a perceived national villain in their current President Donald J. Trump (polling at 59% negatives via Gallup), this would be good grounds to see any strong opposition rise to the challenge, right?

The 2018 midterm elections are likely to be a referendum on Trump’s governing, from his abundance of shitposty tweets poking war at North Korea to his sad lack of political accomplishments outside the majority-unpopular tax bill he passed. Scan articles from the mainstream Washington Post to staunchly conservative alternative media like the Ben Shapiro headed Daily Wire, and they show the polling in Democratic favor… until Democrats, expectedly, have begun to screw up a sure thing.

The Hill reports that, among exclusively registered Democrats, their champion may take the shape of former Vice President Joe Biden, polling at 27% among a list of eleven other potential candidates. Coming in second among registered Democrats was Senator Bernie Sanders, the Independent candidate for Vermont, who remains America’s most popular politician.

This is the man who managed to pull in moderate Republicans and the far-left in 23 key states during his 2016 Democratic race against frontrunner Hillary Clinton. A sensible strategist would see going with the most popular guy, in what amounts to the ultimate popularity contest, would be what Democrats would lean towards… and yet they choose “Middle-Class Joe,” who recently snubbed his millennial base by addressing their grievances with the quote, “give me a break.” 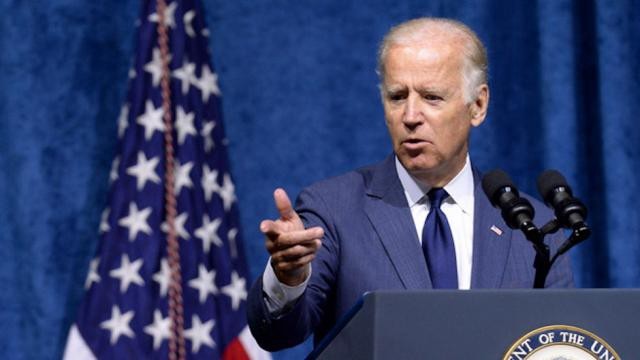 “The younger generation now tells me how tough things are. Give me a break. No, no, I have no empathy for it. Give me a break,” Biden, who turned 75 last November, told The Los Angeles Times early last week.

“Because here’s the deal guys,” he continued, “we decided we were gonna change the world. And we did. We did. We finished the civil rights movement in the first stage. The women’s movement came to be. So my message is, get involved. There’s no place to hide. You can go and you can make all the money in the world, but you can’t build a wall high enough to keep the pollution out. You can’t live where — you can’t not be diminished when your sister can’t marry the man or woman, or the woman she loves. You can’t — when you have a good friend being profiled, you can’t escape this stuff.”

Now, obviously, between you and me, the millennial class is indeed trash (and I include my youthful self in this judgment), and do take their eye off the ball when it comes to certain issues - but it’s like he’s trying to lose. YouGov polls show the millennial base is overwhelmingly left-wing, meaning they are the obvious base Biden would need to attract.

Bloomberg notes that this same millennial class has significantly stopped buying homes as much as previous generations, noting a strong 35% decline in youth housing was due to anxiety regarding the student debt crisis. College tuition hikes have seen an influx of overwhelming debts — which get adjusted for inflation year after year — that cannot be declared bankrupt, meaning it’s an indentured servitude former students will need to pay off until they die, which makes it about as reliable for Wall Street to bet on as mortgages (because who isn’t going to pay their mortgage, right? With student debt you don’t even have the option to skip out.)

From this student debt burden, the millennial class, as much as they may bitch and whine, are right to be angry at seeing a potential ten-year deficit in their lifetime income going towards a form of indentured servitude. But for Middle-Class-Joe, this is no concern. It won’t get his progressivist base to the polls though. 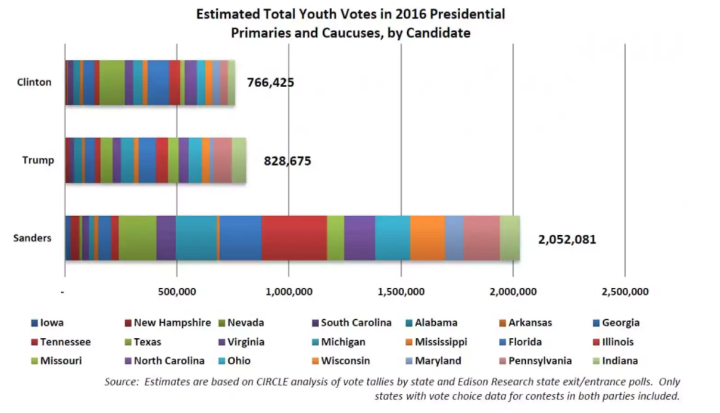 According to a June 2016 report by The Center for Information and Research on Civic Learning and Engagement (CIRCLE) at Tufts University, more than 2 million young people cast ballots for the free college promising Sen. Sanders in the 21 states that had voted by June 1st. Clinton and Trump, on the other hand, who did not run on similar policies targeting issues majority-popular with millennials, got less than 1.6 million of these votes combined. To snub the millennial base is — and this must be read in a voice from the movie Mean Girls— political suicide.

Wall Street Journal/NBC News polls show that, since Sanders has more of an influence on the party, women with college degrees are 16 points more likely to vote Democrat than they were under former Senate Minority Leader Harry Reid in 2014. Americans as a whole are 10 points higher favoring of Democrat-leaning politics than they were three years ago, and yet under the leadership of Chuck Schumer (D-NY) and Nancy Pelosi (D-CA), Democrats have caved on overwhelmingly popular issues that would have otherwise brought in voters.

The Atlantic, a conservative publication, even noted that 80% of Republicans are against the deportation of “dreamers,” the illegal immigrants brought into the country by their parents. This would be a chance for Democrats to gain votes even among the right, rallying their left-wingers behind a key issue, and yet, here on TrigTent, we reported on Schumer and company caving on DACA.

In the aftermath of the uneventful three day Government shutdown, Democrats — who swore to only approve budgets if a DACA deal was reached — ended up passing a temporary three-week budget without a DACA deal, only securing a compromise that has 30% approval.

Florida Representative Debbie Wasserman-Shultz, when asked about what Democrats achieved through the shutdown, told CNN they somehow secured “the potential for momentum,” which, if you’re paying attention, means absolutely fucking nothing.

On the Republican side, with a wave of retirements and their leader’s polls tanking, the race may still be a bloodbath yet.

The Washington Post reports that, according to one congressional aide, Trump was presented with a “sobering slide presentation” about their chances in 2018 — which they described as “difficult.”

White House officials, answering The Post’s inquiries, say the president is now focused on crafting a “robust schedule of fundraising and campaign travel” heading into the ongoing months.

In private conversations, advisors told The Post that Trump doesn’t think that the “2018 election has to be as bad as others are predicting.” His reasoning? Well, they allege that he cited the 2002 midterms, during the Republican era of former president George W. Bush, when their polling and results fared better after the September 11th terrorist attacks.

Whereas far-left outlets like Vox have taken this to mean “Does Trump want a terrorist attack to happen?” it can be interpreted as the president analyzing the situation and having a cold realization that Republican victories are predicated on Jihadis literally falling from the sky for their electoral gain. It is a terrifying proposition, similar to the position of the Democrats, who are relying on oppositional stances and a general failure on the part of Republicans to win them votes. So this is apparently what we’re looking at going into the 2018 midterms – reliance on bad policy and governmental failure, or a conveniently-timed terrorist attack.