YouTube, the largest alternative media platform on the internet, is known for its top-down power structure that’s frequently left content creators anxious and powerless — governed by A.I. algorithms and fallible moderators who decide their fate online. This problematic system came into frantic questioning early last Friday when, almost overnight, channels that identify as classically liberal, libertarian, conservative, outright nationalist and apolitical were seemingly “purged” from the platform — many served with removals, suspensions and community guideline strikes without real concrete reasons as to why.

Around mid-December last year, TrigTent reported a major company decision made by YouTube CEO Susan Wojcicki who sought to “root out violent extremist and content” on the media platform. She sought to do this through the hiring of 10,000 newly trained moderators, curiously labeled their “Trusted Flaggers” — a drastic deviation from past YouTube policy that policed content through some unspecified artificial intelligence system.

Originally a direct response to 2017’s Manchester bombing, which quite literally triggered UK conservative Prime Minister Theresa May into demanding social media giants “regulate cyberspace” against jihadists, it was our publication that predicted the slippery-slope Wojcicki’s YouTube was treading on — inevitably falling on their face regardless of good intentions.

Among those affected this week was sensationalist gonzo journalist Mike Cernovich, the man recently removed from Medium for literally no reason, who published a video reporting on violence from far-left ANTIFA activists. Being a well-known hate group recognized by the FBI, the activists can be seen chanting death threats at Cernovich’s fans before the man’s “Sunday Night for Freedom” event in Washington D.C.

ANTIFA chants in D.C. via @N2Sreports.

"The revolution has come, it's time to pick up a gun."

"You want a red pill, how about a lead pill."

The far left is now making open calls for violence and murder, and the media refuses to report on this. pic.twitter.com/RvTODBQJvn

Shortly after the video’s removal, Cernovich reported this on a Periscope stream and spoke to Breitbart News saying:

“YouTube is censoring honest, unedited reporting about ANTIFA’s actions. This can mean only one thing — they endorse far left wing violence.”

This was followed by a drastic action taken by Google, the owners of the YouTube platform, who temporarily locked Carl Benjamin, better known by his online pseudonym “Sargon of Akkad,” from his entire account — despite the man having no community guidelines strikes and being on the liberal side of the political spectrum. 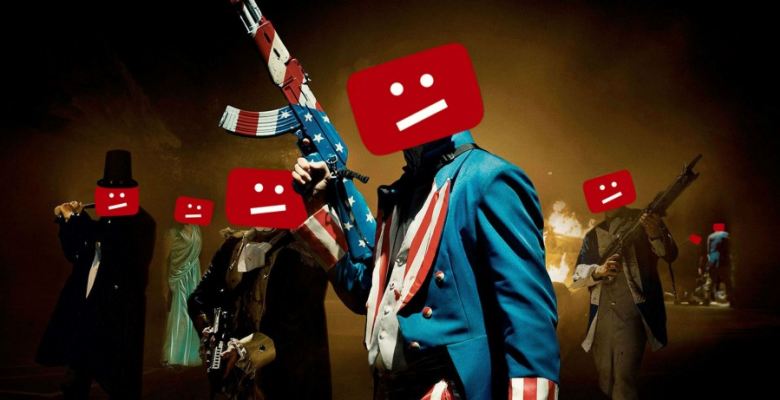 Before his account was restored, Benjamin spoke to Big League Politics about the suspension suggesting the move may have been politically motivated:

“I think it’s because extremists on the right pose no actual threat to the extremists on the left, whereas centrist classical liberal ideas really do,” Benjamin elaborated. “When it comes to the left’s racial collectivism and animus against white people, a fair-minded individualist anti-racist mindset is infinitely more preferable.”

This temporary suspension followed Benjamin’s permanent removal from Twitter early last year — now only using Facebook, Gab.ai, and Minds to communicate with his audience outside his video format. He has regularly been doing interviews for outlets reporting the recent incident.

Liberal journalist Tim Pool, who has also been reporting on the content purge, was hit with a temporary community guidelines strike for questioning the 4Chan originated Florida Suspect Hoax — with the video being restored only after a report from Associated Press vindicating Pool was right on the shooter not being a white supremacist tied to extremists.

It looks like Youtube has reinstated my video on the Florida Suspect Hoax and removed my guideline strike.

Unfortunately the video was essentially killed by the removal and likely won't see any new shares or views, meanwhile the fake news persists.https://t.co/CcvghSwM2E

Mark Dice, who we’ve criticised as being a “right-wing social justice warrior,” was also served with a temporary community guidelines strike for “hate speech and bullying” based on an unspecified video from three years ago — it being removed after fans began messaging the platform on Twitter:

Political YouTube streamer Andy Warski was also served a community guidelines strike, again based on a video from three years ago heavily criticizing and swearing at alleged “comedian” Franchesca Ramsey — disabling him from conducting his live show, Warski Live, on his main channel between 7 to 90 days.

Warski, a self-described libertarian-conservative, has been criticized recently for hosting “internet bloodsport” debates between members of the alt-right, alongside race realist host Jean-François Gariépy, and members of other ideologies. The two have guests who go head-to-head to see who has the better arguments (or funniest insults and appear to be the bigger man.)

Warski has since privated all his old videos citing they are a "risk" to his livelihood on YouTube under a system he views to be "guilty until proven innocent."

The lineup doesn’t stop there.

Breitbart reported on several more removals from the staunchly conservative side of the platform: YouTube vlogger Ashton Whitty who uploaded a video criticizing CNN regarding coverage of the Parkland shootings. Infowars contributor Jerome Corsi accused of two instances of “harassment and bullying” for questioning the same shooting — still holding his community guidelines strikes and supposedly ripped of his February earnings.

The purge even extended to Infowars radio host Alex Jones, a known apologist for President Donald Trump and conspiracy theorist (best known for his belief that the Sandy Hook Massacre was a “hoax to take away the guns” from Americans). His YouTube channel, now close to 3 million subscribers, is one community guidelines strike away from being permanently banned from the platform.

It all seems too crazy to be just an algorithm misunderstanding. Rather, it seems like a human operation, whether intently or not, to remove “problematic content” from “bad actors” on the site. TrigTent highlighted these very same words, and the expected fallout of them going forward with the Trusted Flaggers program, criticizing Wojcicki’s original article for The Daily Telegraph:

“I’ve seen how our open platform has been a force for creativity, learning and access to information. I’ve seen how activists have used it to advocate for social change, mobilize protests, and document war crimes. I’ve seen how it serves as both an entertainment destination and a video library for the world. I’ve seen how it has expanded economic opportunity, allowing small businesses to market and sell their goods across borders. And I’ve seen how it has helped enlighten my children, giving them a bigger, broader understanding of our world and the billions who inhabit it.

But I’ve also seen up-close that there can be another, more troubling, side of YouTube’s openness. I’ve seen how some bad actors are exploiting our openness to mislead, manipulate, harass or even harm. In the last year, we took action to protect our community against violent or extremist content…

Now we are applying the lessons we’ve learned in order to tackle other problematic content. Our goal is to stay one step ahead, making it harder for policy-violating content to surface or remain on YouTube.”

She’s certainly right in labeling YouTube a difficult platform for problematic figures. In a new article from Bloomberg’s own Mark Bergen, a spokesperson over at YouTube admitted these newly appointed Trusted Flagger moderators were able to “misapply” their ever-changing platform policies and cause the “mistaken removal” of content right of center. Their full statement reads:

“As we work to hire rapidly and ramp up our policy enforcement teams throughout 2018, newer members may misapply some of our policies resulting in mistaken removals.

We’re continuing to enforce our existing policies regarding harmful and dangerous content, they have not changed. We’ll reinstate any videos that were removed in error.”

This confirms that a “purge,” whether intentional or not, has arrived on YouTube — which forces me to say Breitbart articles are correct in their sensationalist headlines. If we are to entertain YouTube’s statement of no ill intent towards flagged creators, who just happen to be predominantly right, centrist or just apolitical, it’s still fair to question how the company’s continued fuck-ups, like the “accidental” account suspension of controversial psychologist Dr. Jordan B. Peterson and the video lockdown of apolitical comedian Bart Baker, have continued to persist time and time again - on a massive scale.

Our common sense of Hanlon’s razor suggests we “never attribute to malice that which can be adequately explained by stupidity” — but this becomes increasingly harder to decipher considering who these Trusted Flaggers are.

A new report from the conservative-leaning Daily Caller has revealed both the Anti-Defamation League (ADL) and Southern Poverty Law Centre (SPLC) are among the 100 nongovernment organizations (NGOs) and government agencies in YouTube’s ‘Trusted Flaggers’ program policing content. This is quite laughable considering the ADL has labeled both milk (yes, the dairy product) and Pepe The Frog (an innocent meme of a green cartoon frog) as nation-wide “hate symbols of the alt-right movement.”

This pales in comparison to the SPLC, the smear machine known for their 990 tax documents saying they hide most of their Media Matters and Apple money in the Cayman Islands. Consider who they have listed in their hate database as “extremist actors”: ex Muslim activist Ayaan Hirsi Ali, who has no connection to extremist groups or a history of violence, Maajid Nawaz, head of the counter-extremist organization Quilliam, currently suing the SPLC for defamation, and recently even classic liberal commentator Christina Hoff Sommers (a.k.a. the Factual Feminist) who they claimed legitimizes a form of “male supremacy.”

The organization has even taken to flagging #Christmas, #MerryChristmas, and #Jesus as “extremist trends” on their “hate tracker” database — while failing to list ANTIFA as violent despite clear video evidence:

These are the kind of organizations YouTube is looking to for ethical guidance and content curation for their media platform — which may be in violation of Section 230 of the Communications Decency Act. During last month’s Big Tech Senate hearing, Texas’ Senator Ted Cruz called out YouTube’s alleged ideological bias and the appearance of revoking political neutrality regarding its content.

Why is this important? Should they be proven to hold an ideological bias, the social media company would be legally liable for all content posted on their platforms —giving more legitimacy to Prager University’s lawsuit who argue they were ideologically discriminated against during YouTube’s demonetization crisis (better known as Adpocalypse).

Google and YouTube have been known for their potential discriminatory practices and hypocritical behavior. Last year, the tech giants removed former engineer James Damore for a pro-diversity Google memo that listed biological reasons why women may not prefer the tech industry. Several months after his firing, both Wojcicki and Google CEO Sundar Pichai began repeating Damore’s talking points, citing the same studies as their former employee — giving some credence to his lawsuit that suggests he was removed for being straight, white and male while saying those things.

The Washington Post spoke to a YouTube flagging source who says the removals are bipartisan— saying they are working faster than ever with more than 400 hours of video content uploaded to the site every minute.

“We’re flagging content at a much higher volume, so we’re having more false positives because more content is being reviewed As we dramatically step up hiring, we will see mistakes. This isn’t the last time this will happen.”