The Saudi App on Google That Monitors Women

There are few Americans who would voluntarily submit to the human rights abuses of Saudi Arabia, but you can leave it to some of Silicon Valley’s worst offenders to capitalize on the subjugation of women for easy profits. Google and Apple, the biggest names in mobile app distribution, have just been caught hosting the Saudi government’s service allowing males to monitor the conduct of both their wives and daughters — which has rightfully sparked criticisms from international human rights groups and domestic politicians across the country.

Over the weekend, Sen. Ron Wyden (D-OR) published a letter demanding the chief executives of these big tech giants to immediately withdraw the app from online stores due to the government’s notoriously “abhorrent surveillance and control of women”. Due to the country’s sexist legal infrastructure, women are required by the kingdom’s “guardianship laws” to be escorted by a male superior throughout their entire life, according to Human Rights Watch. The government’s website claims Absher is used by over 11 million people — whether it’s Saudis within their own borders adhering by their own laws or Saudi nationals within other countries that are respectful of privacy rights. If you’re a male citizen of the kingdom, surveillance over women is considered the true human right at play.

The app itself isn’t something new. Operating under the name Absher, the Saudi government has maintained their digital stranglehold on female citizens since 2015 while masking itself as a “national information center” for users to “pay traffic tickets, renew a driver’s license and access other government services” with ease. It’s even rated “E for everyone”, meaning any ol’ Muhammad (senior and junior) can have the chance to secretly track their very own Aisha! Understand that within the literal patriarchy of Saudi Arabia, neither love nor surveillance has its age limits! 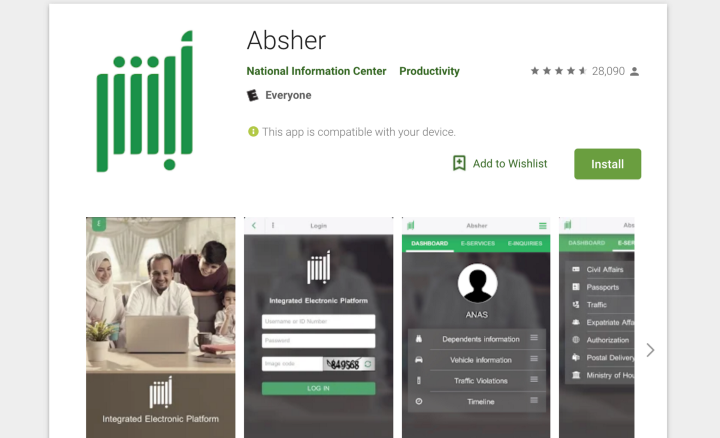 These spying perversions have drawn recent criticisms due to the policies harming asylum seekers since the app immediately alerts guardians every time their runaway uses their passports, as revealed by an Insider report. It describes the journey of Shahad al-Mohaimeed, a refugee surviving a life of guardianship, physical abuse and theocratic rule, who blew the whistle on the Absher database used for refugee detainment.

The escape, which reportedly took over a year of planning, required utilizing a family vacation to Turkey in order to escape Saudi border patrol measures which, via the database, immediately notifies customs and guardians once a passport is used. “I was so scared, so, so, scared,” al-Mohaimeed recalled, describing her path in earning Swedish refugee status via the United Nations. “I left at midnight, and the night was so dark. I was scared of my brother and my family. When we decide to leave, we decide to put our lives on the line. Because if we don’t succeed, our families are going to kill us. It’s shameful to have a daughter leave. It was really a matter of life or death.”

It’s understandable why the kingdom and their theocratic families try to keep the statistics on runaways under wraps. Insider notes there are very few officials sources to determine the annual amount of Saudi escape attempts. The most recent estimate comes from the country’s Ministry of Labor and Social Development which claims only 577 Saudi women have tried to escape since 2015, though these numbers could simply be low-ball bullshit due to the obvious social stigma surrounding blatant human rights abuses. International criticism was surely inevitable.

“We call on Apple and Google to assess the risk of human rights abuses on women, which is facilitated by the App, and mitigate the harm that the App has on women,” reads a statement from Amnesty International provided to The Washington Post. “The use of the Absher app to curtail the movement of women once again highlights the disturbing system of discrimination against women under the guardianship system and the need for genuine human rights reforms in the country, rather than just social and economic reforms.”

“By permitting the app in your respective stores,” Sen. Wyden added in his own letter, “your companies are making it easier for Saudi men to control their family members from the convenience of their smartphones and restrict their movement. This flies in the face of the type of society you both claim to support and defend. To that end, I ask that you take immediate action to prevent your technical infrastructure from being used by the Saudi government to enable the abhorrent surveillance and control of women. Your employees and your customers expect better as do millions of Americans who support America’s promotion of basic rights and dignity around the world. American companies should not enable or facilitate the Saudi government’s patriarchy.”

It appears international law won’t be the factor by which Google and Apple determine Absher’s fate, but rather whether it’s violating their platform’s own terms of service policies. “I haven’t heard about it,” said Apple CEO Tim Cook in an interview with NPR earlier this week. “But obviously we’ll take a look at it if that’s the case.” A Google spokesman also confirmed that the company is “assessing the app to determine if it is in accordance with its policies,” according to their statement to The New York Times. As these investigations open, the app remains functional til this day.

Even by this objectionable standard, it’s doubtful the Saudis would survive a fair investigation. It harkens back to recent investigations published by TechCrunch which found both Facebook and Google were using their own data-collecting VPN software to spy on the usage of their users — which Apple revealed was a “clear violation” of their services despite informing users of their harvesting. We reported that in June of last year, Apple updated its developer policies to ban data collections which are “not necessary for an app to function”.

Since the government argues that Absher offers over 170+ services unrelated to woman-tracking, most of which commonplace document processing used among other governmental apps, this would fall under a definition which saw Facebook and Google punished — despite their obtaining of permission from their users. Surely Absher, if granted the same developer status under the same certificate policies, would face similar consequences for tracking not the movements of their users, but their users’ own unconsenting family members. Whether those spying subjects are within Saudi Arabia or the United States, where the fourth amendment protects the people from illegal search and seizure by government, even just one violation by the state foreign or domestic is quite the tyrannical perversion.