While activists fear the U.S.-Mexico border is now a militarized nightmare, the Trump administration is ready to deploy multi-million dollar MQ-9 Reaper drones for increased security against the nation’s southern neighbor, according to new congressional testimony reported by TYT Investigates on Wednesday. In the report, two generals leading the National Guard reportedly told the House Homeland Security Committee that the government is currently in the process of acquiring the “state-of-the-art hunter-killer drone” for enhanced surveillance across the border, while its potential use of military strikes went unquestioned by federal representatives.

The Reaper, notorious for its carrying of 15 times the military ordnance of its previous model, the MQ-1 Predator, is a remotely piloted drone that costs an estimated $16.9 million per unit while being able to carry a total of four Hellfire missiles that come with a reported blast radius of over 15 meters. This is by no means some ordinary toy drone for simple spying, but an aircraft capable of top-level surveillance imagery and storage and controversial “targeted killing” campaigns through the use preposterous explosions deemed necessary by government-military bureaucrats. 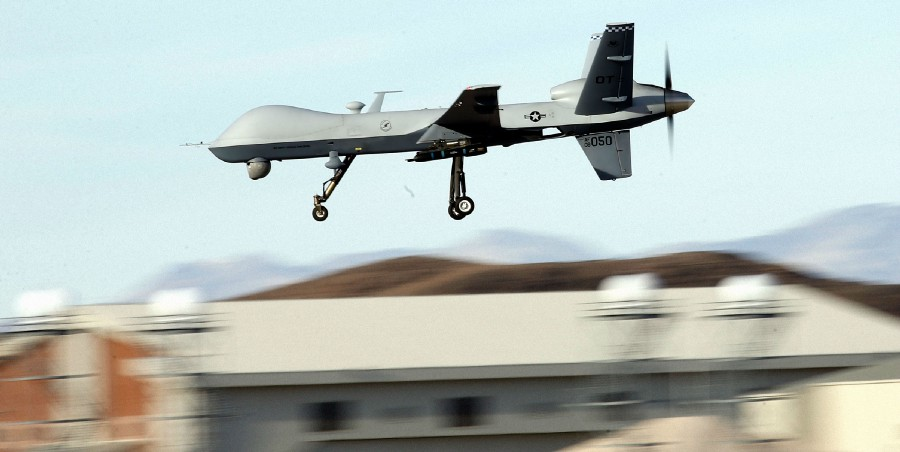 According to another report from Gizmodo, President Trump signed memorandum orders to completely mobilize the National Guard forces to the US-Mexico border in April, citing questionable issues around unlawful crossers he says harm Americans citizens.

“The security of the United States is imperiled by the drastic surge of illegal activity on the southern border,” Trump said in a White House memo, referring to the misrepresented caravan non-story several months back. “Large quantities of fentanyl, other opioids, and other dangerous and illicit drugs are flowing across our southern border and into our country at unprecedented levels, destroying the lives of our families and loved ones, [such as] Mara Salvatrucha [by] MS-13.”

“Other deadly transnational gangs are systematically exploiting our unsecured southern border to enter our country and develop operational capacity in American communities throughout the country,” the president continued to write. “The anticipated rapid rise in illegal crossings as we head into the spring and summer months threatens to overwhelm our Nation’s law enforcement capacities.” Shortly thereafter, Defense Secretary James Mattis authorized up to 4,000 National Guard troops deployed to the border.

But is his reasoning legitimate?

According to Vox, citing data from The Department Of Homeland Security (DHS), illegal entries across the U.S. southern border are at the lowest level since 1971 under President Richard Nixon. The report shows how despite thousands more border agents and improved equipment are making the process of illegal entry incredibly difficult, there’s been a significant decline in illegal entry over time, breaking Trump’s narrative that requires voters to view the situation at the border as a drastic problem only his government takes seriously. Even when compared to the legacy of Bush and Obama, both viewed as unserious about border security, the current administration has detained less than half the amount of border crossers per month. 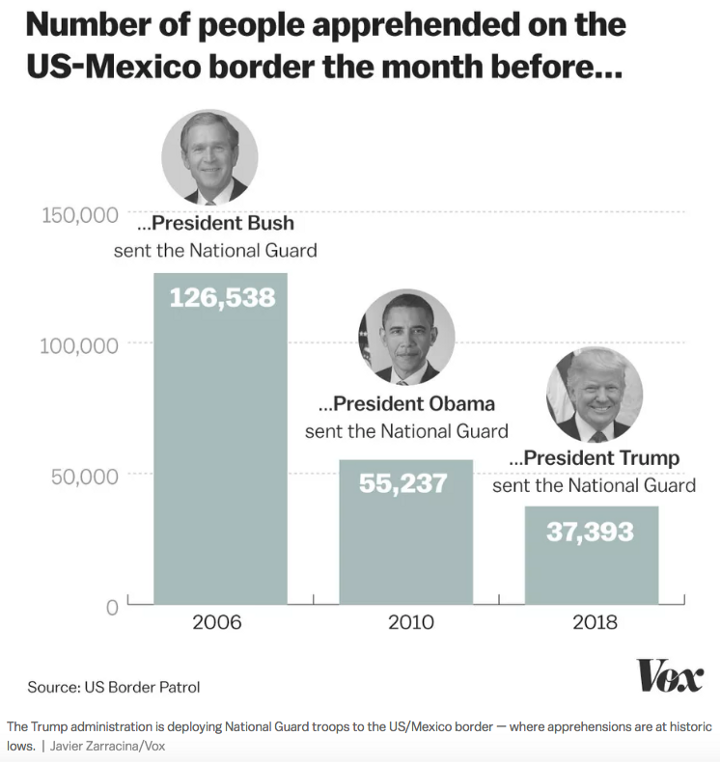 This isn’t an example of President Trump failing to catch criminals, as he so clearly wants to, but rather how there’s a reduction in criminals to detain in the first place. Regardless, “the threat is real,” said DHS secretary Kirstjen Nielsen, justifying Trump’s increase in border officers and lavish military equipment the National Guard has previously called both “expensive and unnecessary.”

Over a few months time, tunes have changed. In his testimony, the National Guard’s Major General John F. Nichols said: “I think there will be a time in the future for the Reapers to be flying. I know that California has mentioned that; I think Arizona, as well. So we see that as a possible in the future.” He was backed up by Major General Michael T. McGuire, the National Guard’s adjutant general of Arizona, who was asked by Rep. Martha McSally (R-AZ) whether they’re engaged in talks to acquire the Reapers. McGuire simply replied, “Yes, we have been looking for that.”

He continued to explain the benefits of even acquiring Apache attack helicopters across the border. “While we are [currently] using the RC-26 and Lakota, there are other rotary wing and remotely piloted systems like MQ-9 and Apache that could be used in night, low-visibility to help support our Customs and Border Patrol agents out of the normal daytime cycle.” For those that don’t know, an RC-26 is also known as the Fairchild C-26 “Metroliner,” a turboprop spy plane reportedly used by the federal government and the Guard, as well as the Lakota referring to the UH-72 Lakota, which is a light utility helicopter used by the same agencies.

Surely brave journalists the likes of CNN’s Jake Tapper and Chris Cuomo, always quick to criticize international programs in Medicare-For-All, have also read these reports and are twitching at the eye to ask the government “how the hell are you going to pay for all this?” Or is that job left up to the independent journalists, such as yours truly, to think over? Sure, it’s likely the drones would be primarily used in intelligence and surveillance operations, but where’s the money to address an already decreasing problem?

Will it be through higher taxes (which the government is so clearly against)? Decreased spending on certain useless problems (also against the government’s interests), the legalization, regulation, and taxation of these targeted drug products (good luck with that drug war, A.G. Sessions)? Will you be repurposing the ones used in expensive wars through Yemen, Somali, Sudan, any of the United States’ current military interventions? Can’t you use cheaper drones specialized for surveillance, instead of “hunter killer drones”? Why am I getting the distinct impression the bombing of brown people will repeat itself, and we’ll ask questions about this militarization later?