Washington remains obsessed with the 2016 presidential election, pinning the rise of President Donald Trump on proven DNC corruption and incomplete accusations of “Russian interference,” however there’s new scientific research from the American Institute for Behavioral Research and Technology (AIBRT) that suggests techno-monopolies like Google hold the real influence swaying voters towards preferred candidates.

According to Dr. Robert Epstein, the study’s lead author, search engines such as Google have the ability to significantly manipulate the voting patterns of their users without people’s awareness and without leaving a paper trail for authorities to follow.

This is the latest investigation Dr. Epstein has made into the Search Engine Manipulation Effect (SEME), the behavioral phenomenon where the political beliefs of unsuspecting users, across multiple nations, can be altered between 20 to 80 percent based on how positive or negative candidates are shown to be on the first two pages of results or the suggested searches bar.

Directly from the study:

In other words, a single negative search suggestion can impact opinions dramatically. Participants who were shown four negative suggestions (and no positives) shifted away from the candidate shown in the search bar (-43.4%).”

While the study contains room for error, using the medium sample size of 600 “diverse” would-be-voters across 48 states, the researchers present the influential problem with centralized search engines: giving users the impression they can conduct their own research, without overseeing curation, when all the reassurances we have are the word of executives from these multi-national corporations — who just so happen to have a vested interest in particular candidates such as former presidential nominee Hillary Clinton.

In 2016, SourceFed published a video claiming that Google was biased in favor of Secretary Clinton — the candidate that earned campaign donations from Google ($174,000 in July 2016) and from a start-up company led by former Executive Chairman of Google Eric Schmidt ($177,000 in 2015).

In the video, narrator Matt Lieberman explained how searching for Clinton generated only positive suggestions such as “Hillary Clinton is winning” or “Hillary Clinton India” — which wasn’t the case for her opponents Donald Trump and Bernie Sanders. 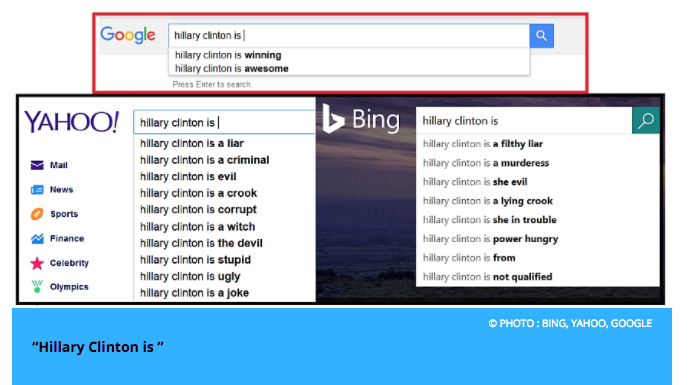 When compared to the results on Yahoo and Bing, all candidates showed a mix of both positive and negative results, depending on what users were searching. Once these results were put through Google Trends, the site showed negative searches such as “Hillary Clinton indictment” were eight times more popular than what Google’s homepage claimed were popular. 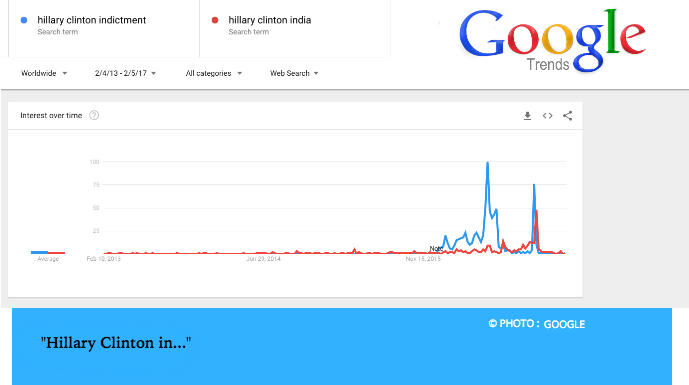 “The intention is clear,” Lieberman told his viewers. “Google is burying potential searches for terms that could have hurt Hillary Clinton in the primary elections over the past several months by manipulating recommendations on their site.”

Once the video gained 26 million views, Dr. Epstein and his associates decided to investigate these claims — using proxy servers, the Tor network, often used to access the dark web, and the removal of caches and cookies to remove any personal bias and recommendations Google may construct for every individual account. While Google, of course, denied any love for Clinton influencing their results, Epstein’s research suggests the opposite.

“Google Autocomplete does not favor any candidate or cause,” a spokesperson told The Washington Times. “Our Autocomplete algorithm will not show a predicted query that is offensive or disparaging when displayed in conjunction with a person’s name.”

This is especially rich given the popular search terms for Clinton’s opponents included “Bernie Sanders socialist,” maligning one with the likes of Stalin, Chávez, and Mao, and the other branded “Donald Trump racist.”

Epstein concluded, whether users go through obsessive privacy measures or not, “it is somewhat difficult to get the Google search bar to suggest negative searches related to Mrs. Clinton” compared to her 2016 rivals.

In his article for Sputnik:

“Bing and Yahoo seem to be showing us what people are actually searching for; Google is showing us something else — but what, and for what purpose?”

This is not the first time the most powerful search engine in the world has come under fire for perceived political bias. Outside the failings of their subsidiary YouTube, known for scandals such as the #YouTubePurge and inconsistent transparency policies, Google’s status as the non-partisan public utility demands questioning. While company engages in flawed fact-checking that only targets center-right outlets, continue to hire partisan organizations like the South Poverty Law Centre and the government to police ill-defined “hate speech” and “fake news,” users should instead demand measures that hold the platform’s neutrality accountable.