According to information obtained by journalist Sam Biddle for The Intercept, conspiracy theorists and market speculators rallying behind Bitcoin’s revolutionary idea of “techno-libertarian” finance were right to assume the worst of governments with an authoritarian interest in controlling the flow of money. This is especially true of cryptocurrencies that increase the ease of use on the online black market, offering users verifiable transactions alongside supposed assurances of online anonymity.

This, dear readers, is the enemy of governmental big tech — evidenced by the heavily redacted, top-secret internal memos provided by Snowden, the former NSA contractor and government whistleblower. He reveals the top priority of the spying agency was to “track down” worldwide users of the cryptocurrency blockchain, amassing swaths of data on an unknown amount of overseas civilians and potentially US citizens from their trades to their online-technical information.

Biddle suggests this is done through the NSA program known as “MONKEYROCKET,” a sub-division of the OAKSTAR “counter-terrorism” initiative said to collect telecom data from around the world, specifically from the Middle East, Europe and South America, without a court granted warrant. They appear to do this through the intercepting of fiber cables among other unspecified computer infrastructures from a collection of covert corporate partnerships (basic big tech spying practices and government-business corruption one can safely assume is on of the side of the unethical). 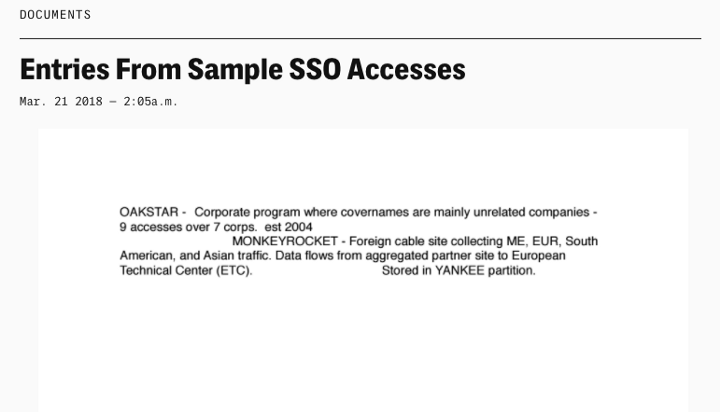 One NSA memo dated March 29, 2013, suggests the agency expanded their efforts beyond just the goings on of dark web trade (bitcoin for drugs or unregistered guns, for example), but to bitcoin users en masse. One analyst briefly wrote of collected passwords, usernames, search histories, websites previously visited and the address of Mac computers to track these dubbed “BITCOIN Targets” in their NSA reports.

NSA agents also discussed obtaining these users’ IP addresses, unspecified network ports and the timestamps of when transactions took place — in simple terms, essentially making their own constructed ledger of the blockchain network and users’ real identities, left in the hands of the U.S. government without a consenting legal process or specific justification. This was supposedly kept in the “XKeyScore” search system at the time with file names such as “Provider user full.csv” suggesting NSA agents had these all on hand in a neat little package to conveniently call upon when needed.

Wikileaks Editor-In-Chief Julian Assange, also a critic of national security reporter Glenn Greenwald and his Intercept publication, took to Twitter to praise the report — while also condemning their editorial decisions to wait on releasing the info until several years after the fact and redact key information in the document that may be within the public interest.

NSA: "Bitcoin #1 priority". Good work by @samfbiddle -- but #Bitcoin'ers have suffered 4.5 years of attacks they didn't need to because @theintercept, WaPo and Guardian did not follow the @WikiLeaks model & continue to conceal most of the @Snowden archive https://t.co/t4ALgLDY7f

“Good work by [Sam Biddle],” Assange began, “but #Bitcoin’ers have suffered 4.5 years of attacks they didn’t need to because The Intercept, [Washington Post] and Guardian did not follow the [Wikileaks] model & continue to conceal most of the Snowden archive.”

The redacted documents fail to explain the exact practices or equipment being used, however, they seem to be using the unspecified tools as some “long-term strategy” of 4-D political chess — using fake privacy software that was actually funneling information directly to the agency themselves. While the NSA did not comment on the report, the documents state this was done to “attract targets engaged in terrorism [Al Qaeda].” It’s believed this practice is similar to the cryptocurrency mining viruses that spread to more than 500,000 Windows computers by EternalBlue earlier this year — an online malware developed and exploited by the NSA among other hacking groups.

Evidently, we can’t exactly just take the unaccountable, spying government at their word! In the next few lines, NSA reporters wrote Bitcoin users of interest expand to “other targeted users… sought by NSA offices such as Int’l Crime & Narcotics, Follow-The-Money and Iran.”

Another NSA memo from March 8th, 2013 said they were “hoping to use [MONKEYROCKET] for their mission of looking at organized crime and cyber targets that utilize online e-currency services to move and launder money” — expanding their operation from serious crimes of terrorism and national security protection to all sorts of online activity. Last month, TrigTent reported on how Bitcoin was losing favor among dark web users based on the high transaction fees, market unsustainability, and long transaction processing times — the ability to remain anonymous is the selling point behind the crypto market and puts Bitcoin in a tight spot among the everyman, casual internet trolls and criminals alike.

The government’s concern about organized crime rising out of an online, anarcho-capitalist system is not without merit, however. It was earlier this week when The Guardian reported on the disturbing link between the unknown mass of bitcoin users and the sharing of abusive imagery featuring children, according to German researchers of RWTH Aachen University. But does one organized racket of physical abuse justify the installing of another with privacy abuse and totalitarian enabling? Do the U.S., and their less liberty-oriented government allies, have the right to conduct unaccountable investigations and evidence collection before we’ve even committed crimes, all because Germany found 1,600 files stored on the blockchain, eight of which contained sexual content and three of which had links to hundreds of dark web content featuring child abuse?

I doubt the answer is all that simple given there’s no concrete way to know who is deemed a “cyber target” in a non-justice system of surveillance where the online cops are judge, jury and, by extension to the rest of the government, executioner.

The Intercept raises questions about what this system would look like, particularly given what we now know about American police and what is called “parallel construction.” This process was highlighted on The Jimmy Dore Show last month by former NSA employee of 30 years turned whistleblower William E. Binney who explained how spy agencies find evidence of criminal wrongdoing (through illegal surveillance means without a warrant, mind you), tip the police off about the suspect and their crime, and have the police construct their own trail to the criminal to obtain warrants and arrests without anything leading back to the government’s own spying crimes.

Patrick Toomey, an attorney working for the ACLU’s National Security Project, told The Intercept this creates doubt in the American justice system:

“If the government’s criminal investigations secretly relied on NSA spying, that would be a serious concern. Individuals facing criminal prosecution have a right to know how the government came by its evidence, so that they can challenge whether the government’s methods were lawful. That is a basic principle of due process. The government should not be hiding the true sources for its evidence in court by inventing a different trail.”

Sourced through The Intercept: