In the outskirts of southwestern China lies a facility. The area bears the flags of China and Apple, its inhabitants isolated behind a quarter-mile stretch of concrete white walls, blind coated windows, and the watchful eye of its security surveillance. By design, the public sees nothing more than an inconspicuous structure like any other. Inside, however, is a key pillar in Apple’s digital storage operations, collecting millions of pieces of personal data through a state-owned Chinese firm’s computers.

If we’re to believe the words of Tim Cook, Apple’s chief executive officer, there is simply nothing to be seen here. According to his public statements, all personal data remains safely stored under the control of Apple Incorporated. Nothing could be further from the truth. Thanks to an explosive investigation conducted by The New York Times, which secured numerous internal documents, new court filings, and 17 interviews with both current and former Apple employees and security experts, we’re given strong reasons to believe that Apple has largely surrendered control to the Chinese government. Given all the evidence on the table, we’re given an extensive inside look into how Apple has essentially prostituted itself to the will of the state, leaving little room to object to the increasing demands of their abusive pimp.

The report details significant concessions Apple has made with respect to the Xi Jinping regime, abandoning several instances of personal data freedoms, encryption technologies, and computer management in order to stay within the good graces of state leadership. As a result of losing data sovereignty to government employees, Apple has directly risked leaking customer data to government censors, directly enabling the state to patrol the digital marketplace for any messages and apps which operate against the interests of the Communist Party. These measures almost contradict Cook’s hailed commitments to civil liberties and digital privacy, given the fact the company played both sides in wanting to “respect national law while seeking to respect the principles of internationally recognized human rights.”

Unfortunately, when it comes to the iron-fist rule of China, the very same market where Apple’s entrance was spearheaded by Cook himself, these national laws are designed so that one cannot have it both ways.

In response to a 2017 Chinese law, for example, it was decided by Apple to move Chinese customers’ data to China and have it stored on computers both owned and run by a Chinese state-owned company. Chinese government workers physically control and operate the data center. Apple handed the keys to Chinese customer data to those data centers. To even call it an “Apple data center” is rather misleading, as all day-to-day operations from server maintenance to potential data surveillance are handled by China. Sure, Apple’s Chinese customers are “safe” from outside forces — with China leaving little in the way for foreign trolls and scamming hackers to exploit data remotely — but when it comes to exactly how modern data abuse occurs, “the call is coming from inside the house.”

In handing over complete control to China’s authorities, both independent security experts and Apple’s own engineers agree there is virtually nothing the company can do from stopping the company from gaining access to the emails, photos, contacts, calendars, and location data of Apple’s Chinese customers. In a public statement, Apple maintains it has “retained control of the keys to the data,” stating “we have never compromised the security of our users or their data in China or anywhere we operate.” In order to comply with the law, however, this cannot be true. “Apple has become a cog in the censorship machine that presents a government-controlled version of the internet,” argued Nicholas Bequelin, Asia’s director for Amnesty International, giving a statement to the Times. “If you look at the behavior of the Chinese government, you don’t see any resistance from Apple — no history of standing up for the principles that Apple claims to be so attached to.”

According to the Times, Apple would be in a legal war on two fronts if not for their savvy workarounds. “U.S. law has long prohibited Apple from turning over data to the Chinese authorities,” writes Times journalist Jack Nicas. “But in moving data to China, Apple created a legal arrangement with the Chinese government that gets around U.S. laws.” This is demonstrated in that Apple made Guizhou-Cloud Big Data, or GCBD, a company owned by the Guizhou provincial government, the legal owner of its Chinese customers’ iCloud data. Once again, it’s technically misleading to call it “Apple’s data.” The devices are Apple-branded, of course. It’s just easier to say “iCloud” than it is to say “Guizhou-Cloud.”

“Apple and GCBD also inserted new language into the Chinese iCloud terms and conditions that granted them ‘access to all data that you store on this service’ and allowed the companies to share the data with each other,” Nicas continues. “Chinese authorities now demand Apple customer data from GCBD, not Apple. Before the arrangement, Apple said it had never provided the contents of a customer’s iCloud account to the Chinese authorities. Since the arrangement, Apple has provided the contents of an undisclosed number of accounts in nine separate cases, it said.” Once again, Apple is still technically not lying. If Apple is not the rightful owner of that data, at least on legal paper, then Apple never provides data to the Chinese government. In fact, it’s the customers themselves who directly provide their data to the Chinese government. It’s just that the handover of the data is masked by Apple branding.

This workaround tactic is no accident, of course. The Times report details how China and Apple are actually a centrally-planned match made in hell when it comes to bureaucracy. The company often rejects or removes any apps the company believes could “run afoul of Chinese rules,” according to current and former Apple employees. Their interviews reveal that Apple routinely trains app reviewers with special software to inspect apps of taboo terms contrary to Chinese agendas, such as the mentioning of Tiananmen Square, the Chinese spiritual movement Falun Gong, the Dalai Lama, as well as the independence movements for Hong Kong, Tibet, and Taiwan.

It’s unclear whether these restrictions are limited to devices within Chinese borders or the global digital economy, which could pose serious implications regarding antitrust and international laws around freedom of expression, speech, religion, and commerce, particularly if it’s a monopoly in the hands of state and company. What is clear is the repression on Chinese soil against its own people. In 2018, for example, China’s internet regulators ordered Apple to reject an app from Guo Wengui, a Chinese billionaire who had broadcast claims of corruption inside the Communist Party.

This was a prime demonstration of Apple’s special software in action, the regime compelling Apple executives to add Guo to its own “China sensitivities list,” thereby blacklisting his name, his associations, and any apps linked to his reputation, according to court documents. Apple claims they’ve only removed apps in China to comply with Chinese laws. “These decisions are not always easy, and we may not agree with the laws that shape them,” the company said. “But our priority remains to create the best user experience without violating the rules we are obligated to follow.” Except removals are not just done out of legal obligation. Instead, Apples choose to comply with Chinese authoritarianism.

This is shown in another case where another Guo app slipped past regulators, prompting Chinese officials to demand answers. The documents show an email from the officials at 2:32 in the morning, stating: “This app and any Guo Wengui app cannot be on the China store.” Not only was the app eventually removed, but Apple also fired the reviewer who approved the app in the first place. When Apple managers questioned Trieu Pham, the app reviewer from Cupertino, Pham testified that he responded saying the app didn’t violate any policies or laws. The managers responded that the app criticized the Chinese government and that this was enough for rejection. So even when there are no national laws in place, Apple actively enables China’s disrespect of “the principles of internationally recognized human rights.”

It would be one thing if Guo’s apps were a special case. Perhaps he’s a particularly offensive man, spreading malicious material against the terms and services. If there was serious harm being done, violating the rights and liberties of Chinese consumers, there’s a case to be made. After all, he’s said to be a billionaire spreading unverifiable defamatory stories about Chinese officials. Apple has its own policies regarding misinformation. But there is no compelling evidence at hand showing that Guo was in the wrong. And Apple allows for apps from a Chinese paramilitary group accused of detaining and abusing Uyghurs, an ethnic minority group in China. China doesn’t hail these cases as victories of revolutionary communist life. No. From censorship to genocide, these acts are considered the dirty laundry of its rule, hidden behind closed doors and treating Guo and Uyghurs as one in the tens of thousands of other repressed folks kept under China’s active suppression of dissent. 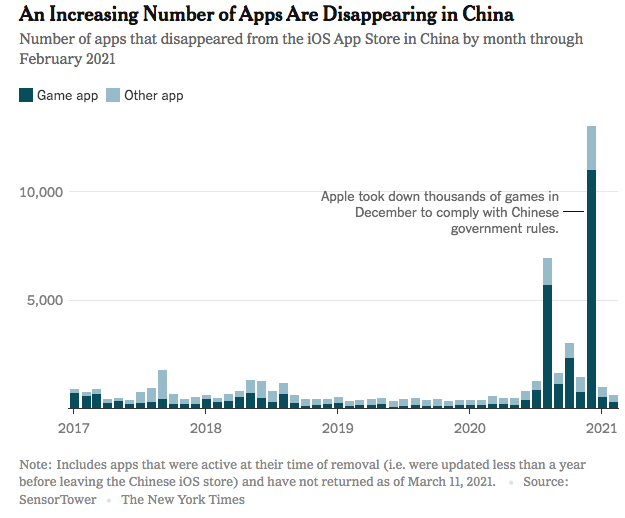 According to the Times analysis, roughly 55,000 active apps have disappeared from Apple’s App Store in China since 2017, many of which remaining available in other countries. Among those, 35,000 were simply video games, left on the cutting room floor of Chinese regulators for no disclosed reason. The remaining 20,000 included foreign news outlets, gay dating services, encrypted messaging apps, tools for organizing pro-democracy protests, and skirting internet restrictions, according to the report. So even though Cook maintains what journalists Nicas, Raymond Zhong, and Daisuke Wakabayashi call a “charm offensive,” keeping up a “statesmanlike” persona on the world stage as a protector of online liberty, it’s behind the scenes where Apple has given China the keys of censorship over their own bureaucratic kingdom.

“The discrepancy between Apple’s disclosures and the Times analysis is in part because Apple is removing apps before China’s internet censors even complain,” the report concludes. “Apple does not disclose such takedowns in its statistics. Phillip Shoemaker, who ran Apple’s App Store from 2009 to 2016, revealed the Apple team rationalize their actions of removing apps by “framing them as simply enforcing a country’s laws,” never questioning whether to dispute these abuses at all. “At the same time, we didn’t want to get hauled up in front of the Senate to talk about why we’re quote ‘censoring apps in China,’” he concludes. “It was a tightrope we had to walk.”