"NO SANCTUARY FOR PRIVACY" might as well be Facebook's new motto these days, according to a new report from The Intercept. Their report revealed that ICE officers, tasked with carrying out the Trump administration’s deportation agenda, now use private data from the social media giant to track down potential criminal suspects.

Haunted by the Cambridge Analytica scandal, where the personal information of over 50 million American users was sold to a Trump-linked political consulting firm, Facebook has quickly become the controversial poster child of the big tech privacy debate, forcing us to question whether such powerful entities should continue to freely use our private data in such technocratic wild west manner. Officers for the U.S. Immigration and Customs Enforcement are more than happy to exploit this system, of course, as new internal emails and documents show how the department uses the backend data to secure targets.

According to journalist Lee Fang, it was Homeland Security agent Lea Whitis who emailed ICE agents some form of a “Facebook Business Record” revealing the name, time, IP address, location and device used during account logins. 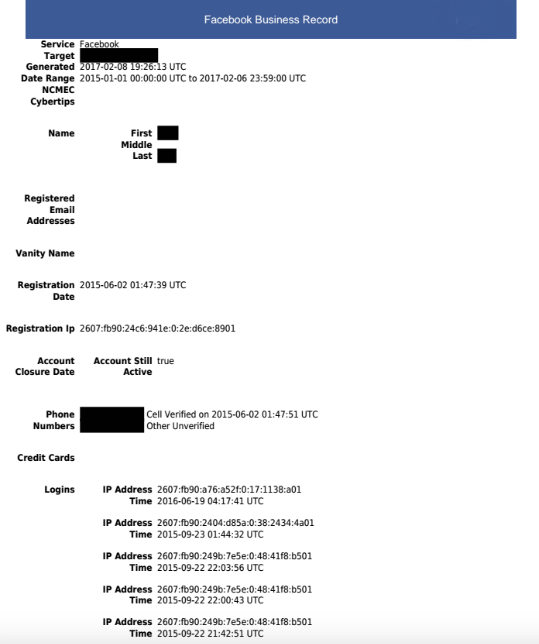 This wouldn’t be so much of a problem if it weren’t for the nature of the American justice system and the Stored Communications Act, a piece of legislation that spits on the intentions of the fourth amendment. Whereas American law enforcement requires both a search warrant and probable cause to investigate your home, the internet leaves its users metaphorically homeless, given the endless ones and zeroes of cyberspace are really stored somewhere else. The closest thing the average user has to an online home is their internet service provider, companies like Comcast who will surely fuck them over in a second.

With this in mind, officers can simply ask these third parties to hand the information over if they can obtain a subpoena and prior notice — which is much lower standard than probable cause.

“Occasionally companies will push back, but that’s relatively rare,” said Nathan Wessler, staff attorney with the American Civil Liberties Union’s Speech, Privacy, and Technology Project, who recently spoke with The Intercept. “From time to time, companies will push back if they receive what they perceive to be a grossly over-broad request, like a true dragnet request, or if there’s a request for example to unmask the identity of someone who is engaging in First Amendment-protected speech online anonymously. But they — for the vast majority of the requests — they comply.”

“For these subpoenas,” he continued, “it’s trivially easy for ICE or any other law enforcement agencies to issue. They don’t require the involvement of a judge ahead of time. It’s really just a piece of paper that they’ve prepared ahead of time, a form, and they fill in a couple of pieces of information about what they’re looking for...”

Already the process sounds rather easy, reminiscent of the illegal ways of the all-seeing NSA and how they help law enforcement conduct cases through what’s known as a “parallel construction”. Parallel construction, for those not aware, is a process revealed to the public by NSA whistleblower William E. Binney, who alleges the government illegally obtains information about criminals through means like NSA metadata spying, which they then use to tip the cops off about said criminal so they can organize a way to catch the guy without anyone finding out they committed a crime in order to catch said criminals. Needless to say, something like this would not exactly be unprecedented when it comes to ICE.

TrigTent has previously reported on how officers frequently try to skirt past constitutional protections granted to illegal immigrants. According to the HSI Search and Seizure Handbook currently used by the department, shady tactics include denaturalization, where ICE put illegals through civil trials to strip them of their status, stealing and selling their property through asset forfeitures to acquire more equipment for law enforcement departments, and writing their own warrants to obtain a proof of compliance. To say ICE aren’t exactly the most lawfully reliable punch of bad hombres is quite the understatement. It was only a matter of time before stories of their use of private internet data came to the forefront.

In their statement to The Intercept, a Facebook spokesperson denied the social media company has a partnership with ICE to access their data:

“Facebook does not provide ICE or any other law enforcement agency with any special data access to assist with the enforcement of immigration law. We have strict processes in place to handle these government requests. Every request we receive is checked for legal sufficiency. We require officials to provide a detailed description of the legal and factual basis for their request, and we push back when we find legal deficiencies or overly broad or vague demands for information.

In this case, our records show that ICE sent valid legal process to us in an investigation said to involve an active child predator. We take the enforcement of laws protecting children from child predators very seriously, and we responded to ICE’s valid request with data consistent with our publicly available data disclosure standards. ICE did not identify any immigration law violations in connection with its data request to Facebook in this case.”

For context, The Intercept recently published a correction after a previous version of their article suggested ICE were using the data to specifically target illegal immigrants on the basis of their immigration status. They claim this was an error made by editor Ryan Grim who changed the language of Fang’s article to suggest this was the case. Instead, it appears the agents were combining “IP address information back from T-Mobile”.

“I am going to see if our Palantir guy is here to dump the Western Union info in there since I know there is a way to triangulate the area he’s sending money from and narrow down time of day etc,” Jen Miller, ICE agent involved with the investigation, said in the email thread.

So who is this Palantir? Well, it’s actually a data analytics company that was co-founded by the pro-Trump billionaire investor Peter Thiel, known for their ties to ICE and other important government branches. The Intercept discovered the firm was developing some form of “vast ecosystem” to help ICE track down illegal immigrants. The methods of how they track down these targets, however, are unclear.

“I have not heard of HSI going and getting private information from Facebook. What we’ve been seeing is when they use someone’s Facebook page and print what they’ve been posting to use as evidence to argue that person is a gang member,” Rachel K. Prandini, staff attorney with the Immigrant Legal Resource Center, told Fang earlier this week. “Photos with friends ICE thinks are gang members, doing hand signs that ICE alleges are gang signs, or wearing clothes that ICE believes indicate gang membership are being pulled from Facebook and submitted as evidence in immigration court proceedings.”

Matthew Bourke, a spokesperson for ICE, refused to comment on the nature of the case where this Facebook data was used but continues to say this was all done by the book and in accordance with the act:

“[We don’t] comment on investigative techniques or tactics other than to say that during the course of a criminal investigation, we have the ability to seek subpoenas and court orders to legally compel a company to provide information that may assist in case completion and subsequent prosecution.

Court orders are an established procedure that is consistent with all other federal law enforcement agencies. Additionally, investigators can use open-source information that is readily available on various social-media platforms during the course of an investigation.”

Given this muddled state of affairs, where private data has so much influence yet a questionable amount of protection, people should truly consider the establishment of an internet bill of rights — to definitively outline where civil liberties begin and where the state’s oversight ends. Facebook is not the only company under the microscope for their management of data and our online liberties — which are perhaps more influential than our physical bubble around us.

Silicon Valley elites have quite the monopoly on their hands, with Zuckerberg having the ability to support immigration reform on the one hand and then have a company associating with ICE in potentially shady ways on the other. It’s clear that the space is overdue for checks and balances.