Quayside, a developing “smart city” on the southern edge of Toronto’s downtown, has been forced into an ethical debate as to how privatization could pose a threat to individual privacy rights. Sidewalk Labs, an infrastructure division owned by Google’s parent company Alphabet, lost one of the project’s lead policy experts and privacy consultants after she was informed that third parties would be able to access the personal data of Quayside residents without a deletion or anonymization process.

“I imagined us creating a Smart City of Privacy, as opposed to a Smart City of Surveillance,” Cavoukian wrote in her resignation letter. “That’s just not on. Your personal information, your privacy is critical. It is not just a fundamental human right. It forms the foundation of our freedom.”

Formerly the privacy commissioner of Canada, Cavoukian was initially promised this Sidewalk Toronto project — which fuses the Waterfront Toronto government agency with the Google-dominated private sector — would establish a formal process with “privacy by design,” meaning all data collection would be required to remove and render personally sensitive information unidentifiable. The current plan is to grant oversight to an undisclosed trust who will oversee city information, whether it’s been anonymized or not. “I had a really hard time with that,” Cavoukian later told Engadget. “I just couldn’t… I couldn’t live with that.”

Sidewalk Labs takes a different view. The organization, holding the public position of preserving privacy rights, argues it’s better for an independent trust to collect the data for disposal rather than enforcing the policy themselves for potential misuse. There was no mention of who this trust will be, leaving the door open for potential unethical relations between parties.

The debate, then, is whether Sidewalk will actually disclose this trust, whether this data will be handled in the manner they promise and whether legal protections ensure rights for the individual. “The question of whether other companies involved in the Quayside project would be required to [ensure this privacy] is unlikely to be worked out soon, and may be out of Sidewalk Labs’ hands,” the organization said in a statement.

Since the announcement of the 12-acre city, a coalition of privacy activists, technology researchers and certain officials within the government have organized a grassroots resistance to the satirical vision of Eric Schmidt, Google’s former CEO, who jokingly proposed using their corporate resources to do “all the things you could do if someone would just give us a city and put us in charge.”

Although this quote was originally tongue-in-cheek, acknowledging the predatory reasons government and corporations shouldn’t intermingle so closely, this rationale flipped when he learned of approval being granted for Quayside's development. “Oh my God,” he said in a statement to The Global and Mail. “We’ve been selected. Now, it’s our turn.” 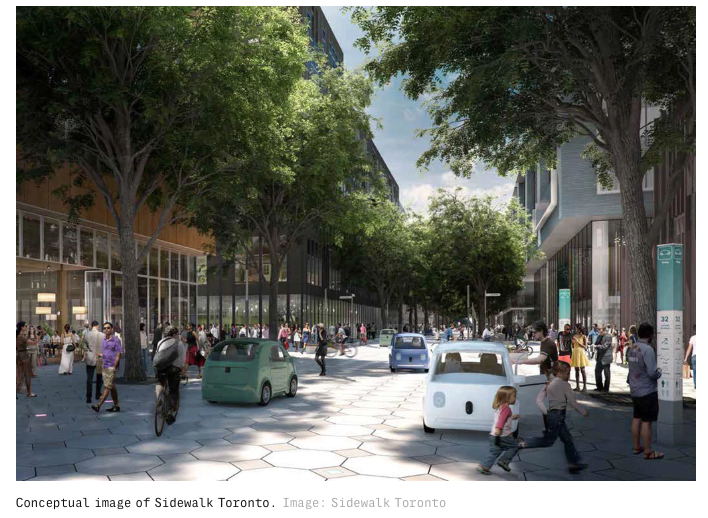 In recent months, this coalition has secured significant victories in their raising of skepticism towards the idea of a big tech governed city, allowing the corporation the freedom to police its residents without the protection of fundamental checks and balances. Former Blackberry co-CEO Jim Balsillie called the project “a colonizing experiment in surveillance capitalism attempting to bulldoze important urban, civic and political issues.”

In her report for The Intercept, journalist Ava Kofman mentions these suspicions are fueled by the prominent resignations from Sidewalk Toronto’s advisory board and Waterfront Toronto’s digital advisers, the departures from Google’s administrative and technical teams after discovering contractual ties that improve surveillance for the military industrial complex, Google’s shady history of covering up internal data scandals and the growing public backlash to their overall administrative side which offer sensible reasons to distrust granting free market institutions such sensitive oversight power.

This coalition hasn’t withered away into virtue signalling tweets — in the vein of corporate conservatives who often complain of big tech’s repeated online censorship — but has festered into the launch of the Toronto Open Smart Cities Forum, a group of Torontonians determined to bring forth public conversations, teach-ins, and debates relating to privacy rights and force the government to keep this city, if it has to exist, accountable.

It’s unclear whether such a community board would be the trust handling the data democratically. Given the scale of the Quayside project, which has an estimated $50M budget from the billions in Canada’s taxes or Alphabet revenue, concerns of digital privacy have expanded beyond just invasions of social media profiles to whether there’s an Orwellian influence on the daily life of individuals. This could be a worthy compromise between ensuring policy representation for community and corporation alike, allowing such data enforcement to be free from potential corrupting influence.

“[These conversations] should have taken place last year, when this project was first announced,” said Bianca Wylie, co-founder of Tech Reset Canada and one of the lead organizers of the opposition to Sidewalk Toronto, in her statement with The Intercept.

“The process Sidewalk Toronto has started has been so anti-democratic that the only way to participate is to be proactive in framing the topic. This isn’t just about data being sold,” Wylie continued. “It’s also about how is this data being used with other kinds of data in other products. You can move a lot of information around within Alphabet without having to sell it, and we need to talk about that.”

Sidewalk Labs, alternatively, has invested large sums of their budget to keep hold of the utopian narrative.

“In anticipation of the negative press,” Kofman writes, “Sidewalk Labs has allocated $11 million of its initial $50 million budget to ‘communications/engagement/and public relations,’ which includes a strategy of building influencers ‘to ensure support’ among prominent figures and the general population. Kofman cites a report from iPolitics which discovered Sidewalk Labs has begun this lobbying campaign “towards 19 federal departments, including the prime minister’s office, Environment and Climate Change Canada, the Public Health Agency of Canada, and the Treasury Board,” among others.

With all the money in the world, the project has lost more support than it has been gaining. The report also cites Saadia Muzaffar, a prominent technologist and the founder of TechGirls Canada, who resigned from Waterfront Toronto’s Digital Strategy Advisory Panel in October due to what she described as “blatant disregard for resident concerns about data and digital infrastructure.” Her viral resignation letter continued: “There is nothing innovative about city-building that disenfranchises its residents in insidious ways and robs valuable earnings out of public budgets, or commits scarce public funds to the ongoing maintenance of technology that city leadership has not even declared a need for.”

So what’s the appeal behind such a corporate-run surveillance state? Kofman’s investigations have shown big tech’s model for manufactured consent is to offer free services in exchange for “virtually limitless data collection.” Sidewalk Labs, after all, was an associate for the infamous LinkNYC and InLinkUK kiosks based in New York and London which have been accused of “data collection for advertising purposes” in exchange for offering citizens free Wi-Fi. Their claims of the data being anonymous has also been questioned.

Quayside, in turn, would offer the same dichotomy in the context of a luxurious living city, the trade off being the potentially insecure data collection which rests only on the word of both corporations and government swearing to avoid abuse, without the community oversight, legislative gridlock or legal deterrents to ensure this behaviour is avoided.

“It’s one thing to willingly install Alexa in your home,” wrote Toronto journalist Brian Barth. “It’s another when publicly owned infrastructure — streets, bridges, parks and plazas — is Alexa, so to speak.”