Gab, the controversial social network committed to protecting free speech liberties on the internet, has officially shut down its website for the time being as the FBI and DOJ continue their joint investigation into the profile of the alleged Pittsburgh synagogue shooter.

Over the weekend, the website’s domain provider GoDaddy gave the administrators 24 hours to move the webpage to another service as Gab’s previous financial providers PayPal, Medium, Stripe, and Joyent blocked all connections with the platform. “We have informed Gab.com that they have 24 hours to move the domain to another provider, as they have violated our terms of service,” GoDaddy confirmed in a statement to The Verge. “In response to complaints received over the weekend,” they continued, “GoDaddy investigated and discovered numerous instances of content on the site that both promotes and encourages violence against people.”

This backlash came after revelations that Robert Bowers, the 46-year-old man accused of murdering eleven Jewish individuals in a synagogue last week, was among the alt-right users who frequent the site for its growing culture of anti-Semitism.

“Jews are the children of satan,” read his final post before the shooting occurred. “HIAS [a Jewish non-profit organization] likes to bring invaders in that kill our people. I can’t sit by and watch my people get slaughtered. Screw your optics, I’m going in.” Following these last words, Bowers committed what the ADL has declared ‘the deadliest attack against the Jewish community in the history of the United States.’

Gab, the small-time Twitter competitor accused of hosting the alt-right and their deadly calls for violence, is currently non-functional as of this time. Their page displays a message declaring the site is under threat by both “the mainstream media and the Silicon Valley Oligarchy” our site frequently reports on. Andrew Torba, GAB’s reigning CEO, writes that “in the midst of this, Gab has been no-platformed by essential internet infrastructure providers at every level.”

Breaking: @joyent, Gab’s new hosting provider, has just pulled our hosting service. They have given us until 9am on Monday to find a solution. Gab will likely be down for weeks because of this. Working on solutions. We will never give up on defending free speech for all people. pic.twitter.com/YvnBOFoQQn

In an email to Breitbart, the publication also accused of catering to the radical fascist-aligned crowds, Torba has said he’s in “active negotiations” with several new hosting providers that are “unequivocally devoted to supporting free speech” as the government investigation continues. “Our goal is to have zero downtime,” he added, “but due to the absolutely unreasonable nature of Joyent’s deadline to find a new host, Gab may experience downtime ranging from several days to several weeks as we finalize a new hosting agreement.”

The website currently has their eyes on blockchain technology. In a report from Forbes, the CEO is expected to fund the site through the ethereum blockchain and “build an entire ecosystem beyond the reach of centralized authorities,” which includes government oversight and the venture capitalist pressure on companies such as GoDaddy and their competitor Twitter. “Ultimately, what we’re trying to accomplish is to cut out the middleman,” said Gab co-founder and CEO Andrew Torba on Bitcoin Uncensored last year. “I want to see VCs tremble, just crumble.”

These kind of statements and history could give one the misimpression that Gab is somehow part of the “web’s darkest corner,” akin to the overwhelmingly bigoted and hateful likes of The Daily Stormer or AltRight.com — but is this an exaggeration? It’s not controversial to say Gab hosts the far-right, but does that mean the entire tree is poisoned?

In a study conducted by professors from the WWW Conferences Steering Committee, hate speech on Gab is about as prevalent as it is on regular social media websites. While their study has a pro-censorship bias, stating that Gab is this “extensively hateful” platform for far-right extremism, their findings show that 5.4% of the posts on the site include hate words, according to their automated search through hatebase.

This is only 2.4 times higher than what kind of content you’ll find on Twitter and is just 2.2 times lower than 4chan’s own “Politically Incorrect board” known as “/pol/”. This means even the most antagonistic research against Gab found the vast majority of users its were cleared under these automated hate speech reviews, though more research on the the complex culture towards radicalization is necessary before drawing any conclusions.

There’s no doubt the offensive words like “kike” or “kill” will draw the suspicious eye of big brother administrations, as they rightfully should, but radicals aren’t always your standard political dumb dumbs so obvious they’d get themselves caught. For example, Wired reports that Cesar Sayoc, the recently accused #MAGABomber, frequently used Twitter to send politicians cryptic messages that only suggested threats against his victims.

One of the posts the publication highlighted merely showed the residence of Joe Biden, the former vice president Says labeled a “piece [of] slime trash,” saying the man should “hug his family real close” every time he leaves his home. Another tweet was directed at controversial Democrat politician Maxine Waters where all Sayoc wrote was “See you soon Maxim” alongside another house picture. These houses were two of 14 to receive the suspicious packages containing a potentially explosive device. 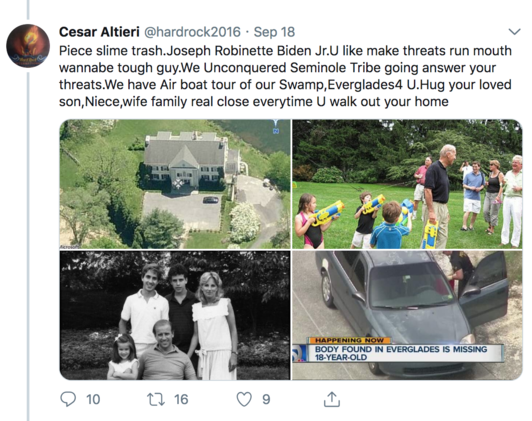 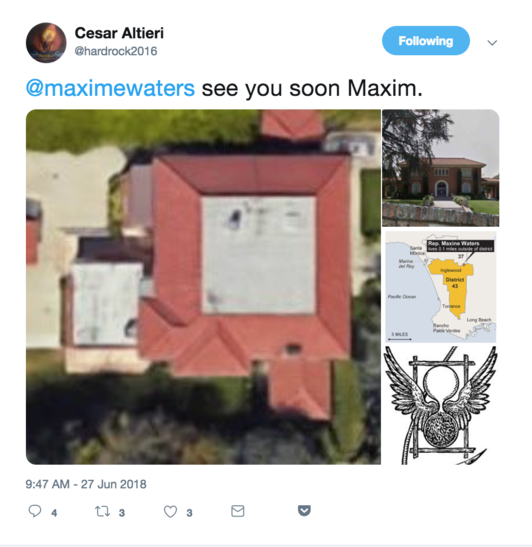 These threats, if left to the review of an autistic-minded computer search, would slip through the cracks where individual administrators would see cause for investigation. Even then, these Silicon Valley tech giants are either unable or unwilling to weed out their bad apples. Rochelle Ritchie, a political commentator for Fox News, tweeted she reported this account to Twitter before packages were sent, though the site didn’t begin any form of investigation and didn’t report information regarding the suspicious profile to law enforcement until it was already too late.

Despite this movement of reporting, their inaction on potential extremism was all a mistake “made in error,” Twitter said, though it’s Gab that’s really the one to blame as the home of unchecked extremism due to their policies on free speech. Tech giants, after all, could never fail to catch the worst offenses on their platform, right? Gab has even highlighted that these same monopolistic empires also fail to police their own radicals, as seen in several tweets provided by TimCast, showing how Silicon Valley’s principle of entirely removing sites based on one mistake applies to institutions as high as Google, Facebook and Twitter. 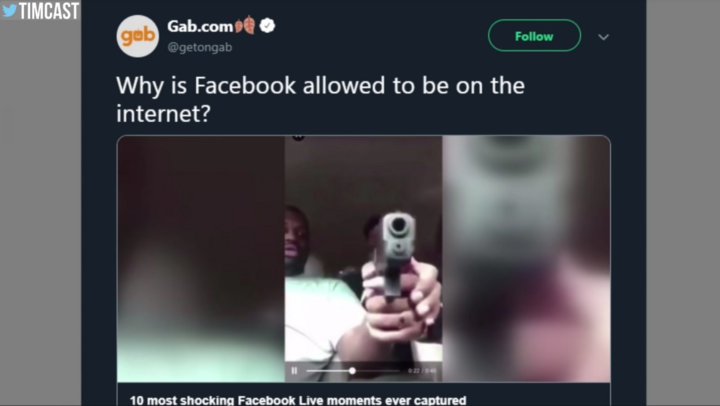 This doesn’t exempt Gab from its own apparent anti-Semitic tirades, but it demonstrates these platforms, which act as the online public square and new means of communication, are bigger than what unaccountable free markets and partisan governments can handle. It’s this lack of transparency and due process that shows there’s a fundamental problem with the tech world, as failures to balance online liberties and crackdowns on extremism persist.

This ignorant process of no-platforming is the new cutting off your nose to spite your face, forcing users down the road of either blind censorship or blind terrorism-enabling that both need to be addressed. As of now, accountability is only being left to independent news outlets such as ours rather than independent commissions enforcing some internet bill of rights, which has been argued for in Congress by Rep. Ro Khanna (D-CA).

The media isn’t immune to this censorship either. Just last week, over 200 accounts were removed by these very same tech giant platforms, declaring certain anti-establishment outlets were guilty of undefined “inauthentic behaviour.” These include publications like Reverb Press, who cheered when conspiracy theorist Alex Jones was removed from these sites, only to be removed themselves. Is there no case these sites should function as both commercial enterprises and public utilities necessary for democracy? Subject to the first amendment, the civil rights act, rapid police oversight and due process under the law? Or is nobody safe in big tech’s lawless wild west?

“Every company has things they can do to reform, and every organization can do better than what they’re doing already,” said Utsav Sanduja, Gab’s former COO, speaking with The Daily Beast. “I have no doubt that this is going to be a great learning lesson for Gab and that better things will come of this. I just hate that innocent people had to die.”