Facebook, the largest social media empire in the world, has realized their verification system for political ads remains an absolute joke. For two years, CEO Mark Zuckerberg has defended the platform as the online haven where the public can exercise their “democratic values” while free market gatekeepers remove all “inauthentic behaviour” used to weaponize the modern discourse.

The company began their so-called transparency crusade in May 2018, assuring users of their intent to shed light on campaign finance through a new policy where all political ads must verify their owner’s true identity before release. This would be an admirable reform for a big tech institution if not for the fact that Facebook’s ID system is a broken mess, allowing shitposters to bypass the process without administrative oversight as their online hoaxes can easily spread to a world-wide audience.

Facebook has acknowledged these system faults with their recent announcement to suspend this “paid for by” label on certain political ads until further notice — just a few days after our report detailing how multiple journalists were able to purchase fraudulent ads that Facebook claimed belonged to Vice President Mike Pence, DNC chairman Tom Perez, 100 current U.S. Senators, far-right white nationalists, Cambridge Analytica and even the Islamic State of Iraq and Syria (ISIS):

“We have learnt that some people may try to game the disclaimer system by entering inaccurate details and have been working to improve our review process to detect and prevent this kind of abuse,” declared an anonymous Facebook spokesman in a statement to The Guardian. “Once we have strengthened our process for ensuring the accuracy of disclaimers, we will be introducing enforcement systems to identify political advertisers and require them to go through the authorization process.”

“Since we announced our political ads authorization and Ad Library in October we have seen hundreds of people go through the authorization process. Authorized advertisers create a ‘paid for by’ disclaimer as part of this process and we require them to represent themselves accurately when they fill this in,” the statement continued, “We will continue to roll out and refine these systems out over the next month so that we have a higher level of protection in place before next May’s [UK] local elections.”

Facebook, touting their billions of dollars and their thousands of employees, which include some of the finest engineering minds on the planet, championed their disclaimer policy as a bold new milestone other companies should rally behind to preserve online democracy.

In a few of their latest video updates, Facebook suggested their disclaimer system was closely linked to “election authorities” who, through a new form of due process for verification, could potentially flag potential inauthentic actors if their proof was unsubstantial upon review.

This wasn’t how their system worked at all.

Thanks to the investigations from journalists William Turton (VICE News), Shona Ghosh (Business Insider) and Sam Biddle (The Intercept), it appears the only requirement a user needed to run an ‘authentic’ political ad was to present a “proof of residence and a valid ID,” even if this ID showed no proof of affiliation with a political candidate, their campaign, their PR management team, their associated organization — anything of the sort. 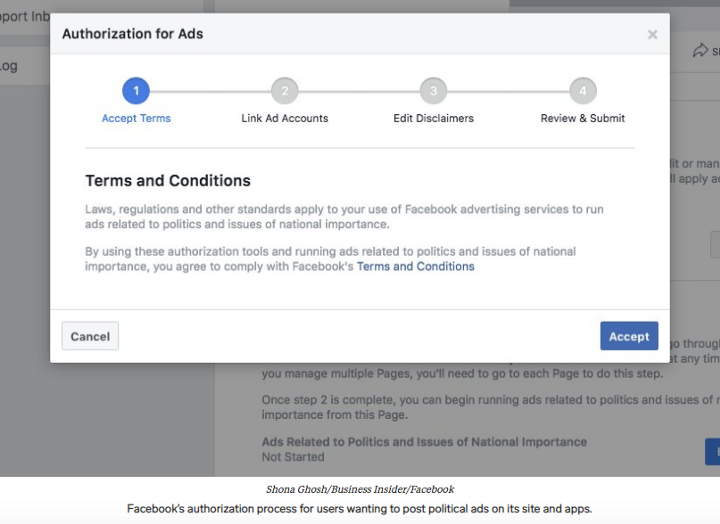 “Facebook knew who was behind the ads internally,” Turton reports, “but externally, what the users would see was made-up ‘paid for’ information.” The subject in the disclaimer could basically just say ‘Daffy Duck’ and Facebook could happily publish it so long as their company know who actually paid for the ad behind closed doors.

Transparency isn’t meant to be a two-tiered luxury, where the platform get the facts and the masses gets the pre-approved narrative. However, is it really a surprise to anybody that big tech corporations don’t share this sentiment? Despite being one of the largest online advertisers alongside Google and Amazon, their failures to prevent simple hoaxes (let alone allowing white nationalist propaganda for audiences interested in “white genocide” following the deadly shooting in Pittsburgh), shows greed plagues their institution as does incompetence.

“As long as I can remember, every radio ad, every TV ad that touched politics always ended with a disclaimer. ‘Paid for by, brought to you by,’’ said Sarah Clark Schiff, the Product Manager of Business Integrity at Facebook, when the disclaimer policy went live. “And there was never anything that was systematic that delivered the same kind of visibility into who paid for paid political content on Facebook, until today.”

Was this all just a lie from Facebook to keep the regulatory oversight of Congress off their backs? Where’s the mandate for improvements if not for media outlets reporting on these scandals such as us? Clearly Facebook’s recent track-record of self-regulation, which is filled with dark money loopholes, has resulted in continued failure — now admitted by the company itself — so is there no case to rein in big tech with a new Honest Ads Act?

In 2016, such an idea was introduced by lawmakers Sen. Mark Warner (D-VA) and Sen. Amy Klobuchar (D-MN) with their amendments to the Bipartisan Campaign Reform Act of 2002 (BCRA), which would “force paid internet and digital advertising to adhere to the same standards as television and radio.” The policy goes further than Facebook’s non-verification process, mandating advertisers to disclose who actually paid for their ads, how many views an ad has received, the size of the donations and the contact information for the purchaser, with potential for expansion following debates on capitol hill.

Such measures would force both parties, Facebook and their political customers, to be held to account for not only their proof of authenticity, but their dark money ties that harm democracy with blatant propaganda. The people haven’t forgotten the betrayal of the Cambridge Analytica scandal, which saw over 81 million Facebook accounts have their private information exposed due to poor oversight of data privacy from the platform.

Given the fact that Facebook has directly admitted to their failures to prevent Myanmar’s incitement of violence on their platform, their failure to ensure data security and their failure to be honest, one would think they’d be ready to work alongside the government or independent organizations for better transparency, policy drafting and enforcement. But alas, the unregulated wild west of big tech lives another day.