As China Leads Green Energy, It No Longer Wants Our Garbage

China is quickly becoming a leading force in environmental activism and renewable energy. It runs counter to popular belief, but the Institute for Energy Economics and Financial Analysis (IEEFA) has released a new report that explores the country’s efforts to shift energy sources and combat climate change. Last year, the world spent $279.8 billion investing in renewable energy - nearly half of it came from China.

In 2017, China invested $44 billion (USD) in clean-energy projects - a 38% year-on-year growth compared to previous numbers. To put that into perspective: for every $1 the U.S. put into renewable energy last year, China put in $3. According to Bloomberg New Energy Finance (BNEF), a sustainable energy finance center run by the United Nations Environmental Program, and the Frankfurt School of Finance and Management, China’s investment in renewable energy was more than 3 times that of the U.S. Unfortunately, American investment dropped 6% last year. In fact, China overtook the U.S. in renewable energy investment back in 2009 and the disparity has steadily been growing.

China has long been lambasted as the globe’s largest greenhouse gas contributor, but it seems as though it is determined to rebalance its energy mix. For many years, China has been the world’s primary importer of waste, but at the beginning of 2018, they implemented a new ban on 24 types of scraps. Months later, many developed countries are still struggling to dispose of waste that they’d previously been offloading to China. 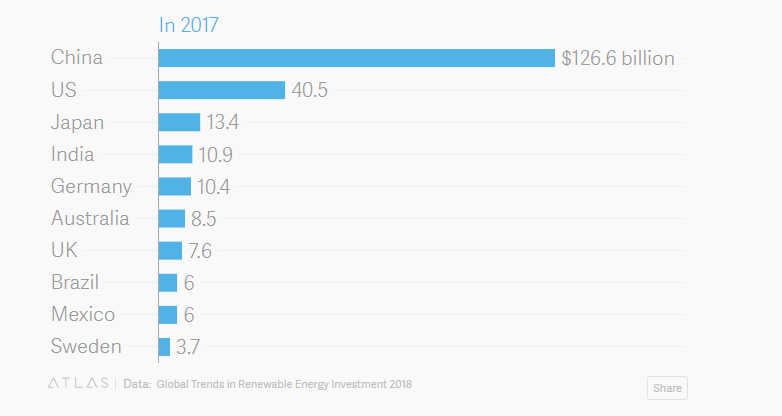 According to the BNEF research, the “big three” developing economies - China, India, and Brazil - accounted for a record-breaking 63% of global investment in renewable energy in 2017. Additionally, the most recent five-year study published in the Proceedings of the National Academy of Sciences established that China’s environmental resources had sequestered approximately 201.1 million tonnes of greenhouse gases that time period. They cited a large part of this being due to the number of programs implemented by the government, such as replanting burned and lumbered forests, reallocating croplands, and passing legislation to allow grasslands to recover from grazing. Combined with recent economic decisions, China’s environmental fight is quite surprising, given the world’s penchant for pointing its finger at the manufacturing-driven nation whenever climate change is discussed.

Before January 2018, China was the dumping ground for more than half of the world’s trash, importing almost 9 million metric tons of plastic scrap a year. They began importing waste in the 1980s for a growing manufacturing sector, building one of the strongest waste processing and recycling industries, but improper handling and lack of supervision turned the country into a well-known polluter. Trying to deal with its apocalyptic-like air pollution, China began aggressively adopting new renewable energy. Although they still have large coal investments, China is the world’s largest solar-energy producer as of 2016. In some cases, defunct coal mines have been turned into large floating solar farms. Some areas even installed raised solar panels to accommodate livestock grazing around and underneath.More than two-thirds of China’s investment in 2017 went into solar; it’s estimated they now can power more than 38 million homes by solar-generated energy alone. This was closely followed by China’s investment in wind energy, taking up almost the entire remaining third of their financial investment, with hydro and bioenergy following up. They have a slew of massive renewable energy projects in the works, with everything from a solar expressway that can power around 800 homes to replacing an entire fleet of public transit buses with electric vehicles (around 5,698 buses).

As such, China was dubbed the “global leader in green finance” ahead of the Macao International Environmental Co-operation Forum & Exhibition (MIECF) and is now regarded as one of the leading authorities in environmentalism, with countries in the West looking to Beijing for cues on green investment. Economic and financial dialogue between China-U.K. and China-France have already begun, and the Bank of England is working with them to develop green finance instruments.

“I think the Chinese government, the general public, and financial institutions have vigorously supported green finance by introducing financial policies and encouraging product innovation,” Dr. Ma Jun said, the chairman of the Green Finance Committee of China Society for Finance and Banking.

Of course, it’s much easier to implement quick policy changes in a country the government has absolute power. For example, President Xi Jinping was able to shut down tens of thousands of businesses and factories for their pollution levels with relatively little fanfare. Attempting to do the same over here would be categorically disastrous. Prices for a range of commodities have skyrocketed as a result, but the 0.25% decrease in China’s GDP has barely given the government pause. $8 billion of solar equipment has been exported to China since it began its green agenda, and it has become the number one exporter of environmental goods and services. However, it does give me pause when you consider U.S. investments and environmental changes - or lack thereof. I mean, it’s all well and good that Apple now claims it runs on 100% renewable energy and we’ve got Elon Musk fighting what seems like a one-man battle to bring environmentally-friendly tech to the masses. But the fact that Trump and his administration are still fighting for coal power plants as recently as this week is a strong reflection of how little American effort has been directed towards renewable energy.

It seems that while America is pulling out of the Paris climate accord and heading in the opposite direction, China is clearly at the forefront of environmentalism. This isn’t to deny China’s role as the largest emitter of greenhouse gases - the University of Chicago found that Chinese air pollution levels still exceed global standards - but they are making a concerted effort to fight back. By implementing the ban on 24 types of waste, China is taking a stand, and it’s throwing the rest of the world out of whack. Waste exporters are still scrambling for an alternative, with the U.S., The U.K. the E.U. and Japan being listed among the highest exporters. The European Union is discussing a tax on plastics usage, the U.S. asked China to lift the ban, and the U.K. is trying to divert trash to Southeast Asia.

It’s rather hypocritical, once you delve into it, that everyone is always blaming China when climate change comes up. Some countries - and even individuals - pat themselves on the back, comparing their air qualities with those of Beijing, when most of the world has been sending their waste to China to deal with. Now that they don’t want it, suddenly no one seems to know what to do.

“This regulation will send shockwaves around the world, and force many countries to tackle the ‘out of sight, out of mind’ attitude we’ve developed towards waste,” Greenpeace East Asia plastics campaigner Liu Hua said before the ban came into effect.

And that’s the key: most of the developed world doesn’t often think about trash, because they just get rid of it. That’s probably one of the most important factors, along with a reluctance to change lifestyles, which have halted environmentally-beneficial changes. Despite some rather transparent attempts by American-based groups to claim that this ban is detrimental to the environment since some scrap commodities they export are needed by Chinese manufacturers, China refuses to back down.

I guess we’re just going to have to start taking out our own trash now that China is at the forefront of environmentalism. What a strange and fascinating thought.