It’s only been two weeks since the world’s largest delivery service was caught lying about inhumane bathroom practices. “If employees actually had to pee in bottles,” once said an Amazon spokesperson, “nobody would work for us.” After an investigation from journalist Ken Klippenstein of The Intercept, however, internal documents prove this was a lie. In fact, these issues of “public urination” and “public defecation” were not only open secrets, but drivers were “implicitly forced to do so, otherwise, we will end up losing our jobs for too many undelivered packages,” revealed Halie Marie Brown, a former delivery driver who quit due to the company’s stressful environment.

In recent weeks, Amazon’s PR department has been floundering to save face, from using its cringe, Wendy’s-style Twitter page to unveiling a driver survey that asks couriers whether they’re “able to find restrooms” on delivery routes. Although this gives Amazon the appearance of tackling their self-made crisis, drivers say don’t be fooled, as the survey holds a key blindspot on who is actually to blame. “They’re giving us monster routes,” one driver told Business Insider, providing a picture of the survey’s four available options below. “If we so much as fall 10 minutes behind, Amazon will ask the dispatchers why we are behind. The funny part about this screenshot is that they don’t provide an option for ‘Do not have time to use the restroom,’ which is the main problem.” 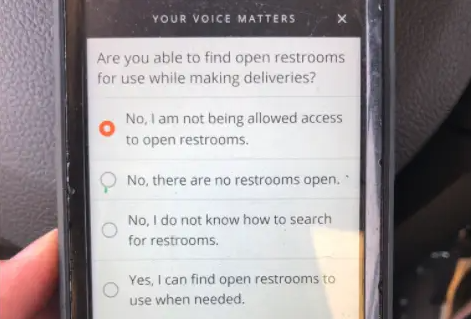 Klippenstein’s report paints a dire picture for Amazon couriers, as formal policy documents show a widespread trend where pee in bottles, poop in bags and on-the-go menstrual pad changes were regrettable yet necessary to meet deadlines. Although the documents prove it was a recurring infraction, which was made known to management, nothing has changed since. These documents include a list of violations, marked as “Amazon Confidential,” which detail various ways employees have acted on the job. In fact, the list’s first examples of violations make direct references to the aforementioned “public urination” and “public defecation,” signifying their prominent awareness within Amazon. The document was provided by a current employee protected under the conditions of anonymity. 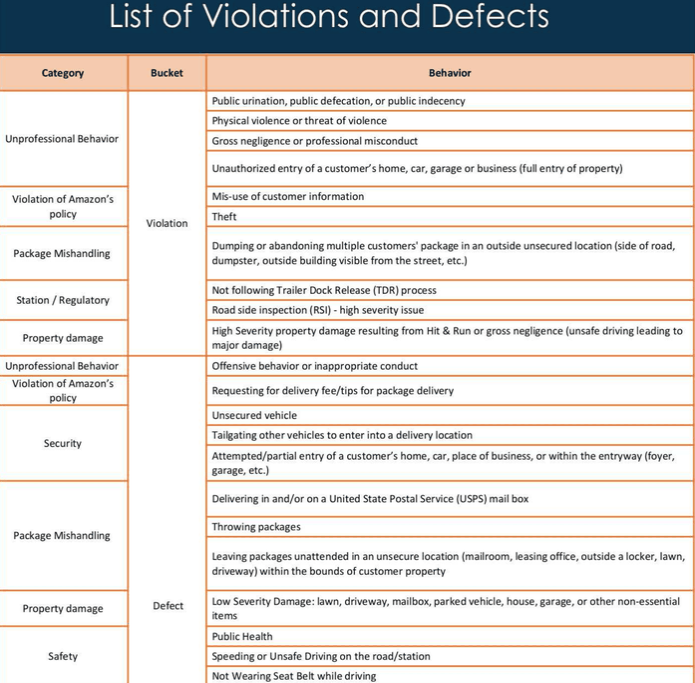 This employee also provided a May 2020 email from Amazon’s own logistics area manager, who can be seen chastising employees for an incident involving a lost (and unceremoniously found) defecation bag. “This evening, an associate discovered human feces in an Amazon bag that was returned to station by a driver,” the email reads. “This is the 3rd occasion in the last 2 months when bags have been returned to the station with poop inside. We understand that DA’s [driver associates] may have emergencies while on-road, and especially during Covid, DAs have struggled to find bathrooms while delivering.”

“We’ve noticed an uptick recently of all kinds of unsanitary garbage being left inside bags: used masks, gloves, bottles of urine,” the email continues. “By scanning the QR code on the bag, we can easily identify the DA who was in possession of the bag last. These behaviors are unacceptable and will result in Tier 1 Infractions going forward. Please communicate this message to your drivers. I know it may seem obvious, or like something you shouldn’t need to coach, but please be explicit when communicating the message that they CANNOT poop, or leave bottles of urine inside bags.” 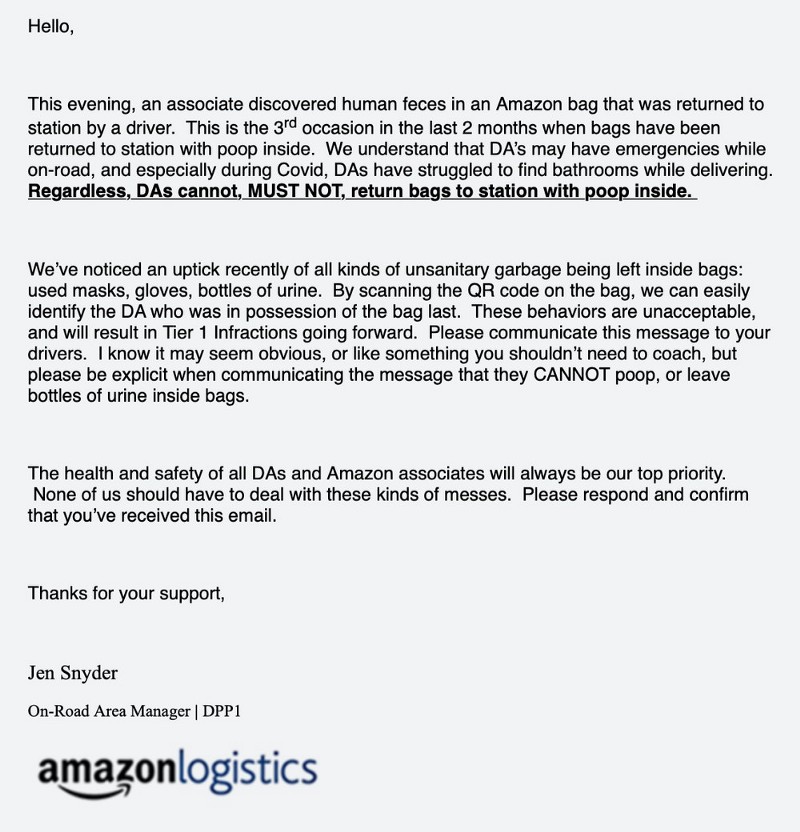 This would be a simple enough request if not for the fact that Amazon operates on contradictory goals. As Klippenstein writes, Amazon technically prohibits these inhumane bathroom conditions, as the documents classify these practices as being “Tier 1 infractions,” which can lead to termination. In addition, drivers are technically given 30 minutes of paid breaks per day. Nevertheless, these can be seen as “disingenuous” attempts to save face, as drivers simply cannot meet their quotas and take their break at the same time, “no matter how fast you are,” said one Amazon delivery employee based in Massachusetts.

In the case of Brown, she began receiving emails from her manager in August that were simply titled “Urine bottle,” showcasing this disingenuous practice in action: “In the morning, you must check your van thoroughly for garbage and urine bottle. If you find urine bottle(s) please report to your lead, supporting staff or me. Vans will be inspected by Amazon during debriefing, if urine bottle(s) are found, you will be issued an infraction tier 1 for immediate offboarding.”

When Klippenstein asked if management eased up on quotas in light of bathroom incidents, Brown said, “Not at all. In fact, over the course of my time there, our package and stop counts actually increased substantially.” This seems to show that Amazon not only accepts these conditions but has increased the workload to make them necessary. The only difference is that Amazon now asks employees about the problem, despite still lacking steps to address it.

An Amazon driver by the name of Robert Lupia, who said he receives a survey almost every morning before he is expected to deliver 350 to 400 packages per day, admitted he’s required to clock out for lunch breaks but doesn’t have time to take the break. “Yes we pee in bottles daily; it’s part of the job,” he told Insider. “Places don’t allow non-customers to use their bathrooms.” Another driver said he selected the top choice, which read, “No I am not being allowed access to open restrooms,” because drivers “frankly aren’t given enough time to search for restrooms.” When it comes to their reasoning, drivers will always cite time, time, and more time. It’s no surprise, then, to find out this practice of skipping breaks has been going on for a long time.

Klippenstein also cites multiple public reports that Amazon employees are required to skip bathroom breaks to keep its operations afloat, originating from a 2018 book by the British journalist James Bloodworth. The book is titled “Hired: Six Months Undercover in Low-Wage Britain,” and detailed striking allegations from Amazon workers at a warehouse in Staffordshire, U.K., who were also required to urinate in bottles in order to meet production quotas. From production to delivery, Amazon’s business model can be best represented as a plumbing pipe, draining its employees of their literal blood, sweat, tears, and all other bodily fluids, as leaks expose the dirty ways they’ve connected the world. But no different than any safe sanitation industry, Amazon will eventually require regulation.

It’s just the ability to regulate Amazon is no easy feat, of course. On March 29th, Amazon workers in the state of Alabama voted not to unionize their workforce, striking a significant blow to organized labor rights. The election would have given more than 5,000 warehouse workers the ability to join the Retail, Wholesale and Department Store Union. As it stands, none of Amazon’s 800,000 employees in the U.S. are currently unionized, presenting no real incentive to stop one of the biggest pollutants in this drainage economy. I don’t use that term loosely, as a report from the CDC found this problem wasn’t just limited to Amazon. “Many workers in a wide range of industries and occupations say they cannot take the bathroom breaks they need.” It cited surveys of teachers, poultry-processing workers, nurses, bus drivers, and taxi drivers.

The brilliant thing is for some Amazon employees, the abuse can bring with it an undeserved benefit of the doubt, such as the case with Savannah, who stopped working as a driver for one of Amazon’s third-party delivery-service providers in February. “They didn’t really force you to pee in the bottles,” Savannah told Insider. “You just didn’t really have time to go to the bathroom. Honestly, I would try to hold it as much as I can. But … there were times when I would personally find a pee bottle in my van because people were lazy and didn’t want to throw it away. They don’t see how hard it is — the weather we deal with, these bathroom situations, lunch breaks.”

Except they do see it, both figuratively and, with their increased “employee surveillance arsenal” keeping track of productivity quotas, literally as well. Every document proves it. They just don’t care. Or if they do care, it’s in the sense that it helps their overall business thrive, even if it degrades their employees into either dehumanized contempt or graceful Stockholm syndrome. And the sooner this is addressed, whether it’s through business, union, or government reform, the sooner Amazon can be known for its golden arrow rather than its unsavory golden streams.