Cenk Uygur, a founder of the progressive news network The Young Turks (TYT) and former congressional candidate, was recently caught pleading with his staff not to unionize following a labor rights announcement from the International Alliance of Theatrical Stage Employees (IATSE) in February.

According to a report by The Huffington Post, the progressive pundit was involved in a “tense” meeting with employees held in Culver City, California to argue whether a union belongs at a small news company “struggling to make profits”. As described by two workers present at the discussion, Uygur was adamantly convinced that unionization would be inconvenient to the independent network as “it would not have grown the way it has”.

The conversation — described as “emotional” and “chastising” with Uygur throwing his papers to the ground near employees—appears very different from the so-called progressive, pro-worker broadcasts TYT offers its millions of supporters globally. Jack Gerard, TYT’s Chief Operating Officer during Uygur’s recently failed bid for Congress, issued a statement saying “we're not discouraging unionization”, contradicting staffers who feel “discouraged, disappointed, but unshaken” by their corporate bosses. “We feel it’s the right thing to do because of what TYT values.”

Before the report was published, Uygur agreed to an interview with HuffPost to clarify his position on worker unions, preferring to focus his attention on “large corporations” which “aren’t sharing profits with their workers.” The explanation isn’t total bullshit, arguing a protected workforce would bring “new legal and bureaucratic costs” at a time of collapsing online ad revenue, even despite TYT’s growing subscription base, raised venture capital and a $25M course investment from Google’s News Initiative alone.

“The reality is we’re in a precarious position,” Uygur said. “We’re in a digital media landscape where almost no one makes money or is sustainable. For a smaller digital media company, those are absolutely real considerations. It doesn’t mean you shouldn’t have a union. Everyone should know the full context. If folks say they don’t believe we’re in a precarious position, OK. And that’s their decision to make.”

He later confirmed that the infamous meeting took place, the papers were thrown and he did chastise an employee, stating “the person smiling seemed to be openly mocking the idea that the company might not survive after 18 years. And we put all this blood, sweat and tears into it. I don’t find the idea of us going down funny.” After Uygur’s interview was published, TYT was reported to the National Labor Relations Board (NLRB) — a government agency overseeing collective bargaining and unfair labor practices — which may force the company’s hand towards unionized labor.

The report notes that IATSE asked TYT management to voluntarily recognize the union — representing the production and post-production staff — through the use of “card check”, a basic practice where a clear majority of staffers are represented if they’ve signed union cards. This is the standard practice across unionized media companies, avoiding the terrible “legal and bureaucratic costs” Uygur cited as a problem. Ironically, TYT prefers to temporarily halt the union until they’ve gone through a bureaucratic “secret-ballot” election administered by a third party outside the NLRB’s oversight, which Uygur conveniently claims is supported by “some, not all” of his staff.

“TYT puts its employees first,” the company wrote in a statement. “We have been clear that we will honor the majority decision of our staff and want to provide them with the most democratic approach for sharing their preference. To clarify our position in regard to IATSE, TYT voluntarily agreed to recognize the union. We did not tell IATSE to go to the National Labor Relations Board (NLRB). We asked for an immediate secret ballot to confirm majority support, which is used by many progressive employers as part of the voluntary recognition process.” 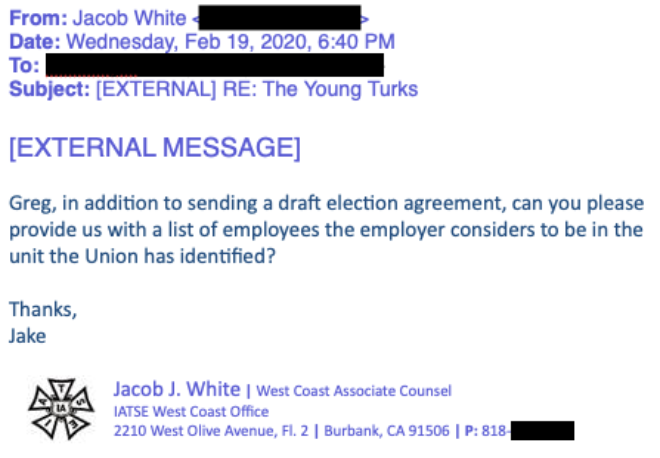 “We also asked IATSE to clarify which parts of the company would be covered by the union,” it continues, providing a screenshot of their proposal. “IATSE was participating in this discussion and asked us for a process to go forward. Then last Friday, instead of responding to our proposal about how to proceed, they ambushed us with a public statement claiming we were not voluntarily accepting the union, which is false. Also we have no idea who is in @TYTUnion, nor do we want to know, but they don’t represent all of the employees of TYT at all. Most of the employees of TYT would be unaffected by IATSE.” 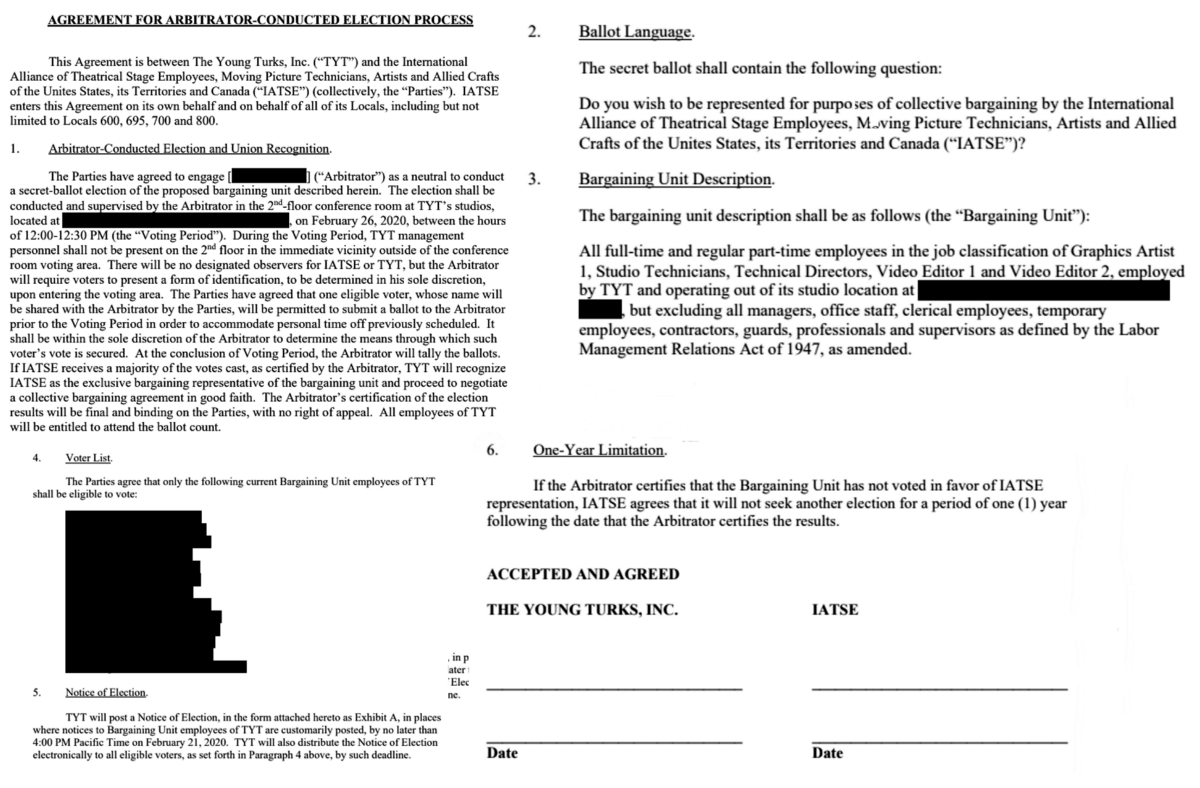 “Given the unusual circumstances here,” the statement concludes, “IATSE not only is actively campaigning against the founder of the company in his political race, but also has clearly acted in bad faith. It would be absurd to accept that they truly represent the wishes of our employees without verification. If our employees confirm that they really do want this union to represent them, that changes the equation completely. We believe our employees are the ones who should decide and we continue to call for an immediate secret ballot. If IATSE doesn’t agree, it’s obvious they never had the support of our employees and this was all a ploy to intimidate us and the people who work at TYT.”

The campaign came at a time the TYT host was trying to fill the primary seat of California’s former Rep. Katie Hill, a Democrat who resigned in October amid an ethics probe into her relationship with a staffer. Following the election on Super Tuesday, Uygur was beaten by Christy Smith, a California assemblywoman, known her unifying of both the party’s establishment and many labor unions throughout the state. At the time, Uygur blamed the union movement as bad faith political theatre by IATSE, which endorsed Smith. No evidence of foul play was presented, as both staffers and union organizers revealed previous negotiations to unionize TYT date back over two years ago.

“Look, at the end of the day, my opinion on it is irrelevant,” Uygur concluded. “It’s the employees who get to decide and who should decide.” Whether TYT allows these decisions are yet to be determined, as staffers are hoping to undermine the secret-ballot as unreasonable for a pro-worker establishment. “We love the company,” the staffer said, surprised they’re fighting over the formation of a union itself rather than fair contact terms. “After all, we’re just getting the company to live by its principles.”

The fight between Uygur and the budding union appears to have grown even more contentious in recent days, with the union filing “two separate unfair labor practice charges alleging that the company and its CEO..withheld wage increases and bonuses from employees as a result of the union drive, and that they fired an employee as retaliation for union activity” according to Hamilton Nolan, writing for In These Times. The employee fired is said to be Jacorey Palmer, the smiling employee chastised by Uygur during the meeting last month.

Nolan continues: “An employee of TYT involved in the union effort, who asked to remain anonymous out of fear of retaliation, said that the workers’ annual discretionary raises—which represent a significant amount of money in a workplace where pay is already low—were scheduled to go into effect at the same time the union drive was announced. Shortly afterwards, according to the worker, employees involved in the union drive were told that ‘they were gonna have to delay our raises and bonuses until the union stuff got sorted out.’ The worker said that employees who are not in the proposed collective bargaining unit did get their raises.”