Members of the progressive movement now have to face their own uncomfortable Jewish question: whatever are they to do about Mr. Louis Farrakhan?

It’s no secret that Farrakhan, leader of the Nation of Islam organization, is no friend to the Jewish people. In fact, the internet is littered with video evidence to the contrary. This is a man who has railed against the Jewish people consistently, branding them his sworn “enemies”. This is a man that has accused Jews of running a conspiratorial new world order that serves Satan and has organized plans to screw African-Americans in everything from banking oversight to America’s Congress. Farrakhan continued to blame Jews as having a central role in perpetuating the slave trade, later condemning Israel for gay civil rights and even went as far as to praise Adolf Hitler, as being a “very great man”.

Dare to question members of the Women’s March on their association with this man, known for this kind of anti-Semitic behavior echoing the likes of David Duke, and they either play dumb or defensive. This association has become enough of a problem that several key staffers have resigned from the left-wing activist organization for their inaction.

Among the high-profile ranks is Alyssa Klein, social media director for the Women’s March, who left her post saying that the administrators were giving a platform to “a dangerous troll” in Farrakhan, while “turning a blind eye to the hate spoken about a group of people.”

I do not respect unquestioning loyalty.

Especially if it means attacking those who are asking legitimate questions.

And especially if it means turning a blind eye to the hate spoken about a group of people.

Leaders, be open to questions.

“I respect loyalty,” Klein wrote on her Twitter, “[but] I do not respect unquestioning loyalty. Especially if it means attacking those who are asking legitimate questions. And especially if it means turning a blind eye to the hate spoken about a group of people. Question leaders. Leaders, be open to questions.”

Klein, of course, is speaking indirectly about the February controversy surrounding Tamika Mallory, a central speaker behind the Women’s March, who attended the notoriously anti-Semitic Saviours’ Day event held annually by our faithful hate preacher Farrakhan.

During the three hour speech, where Farrakhan recognized Mallory in the audience and praised her for her activism, the conversation turned conspiratorial when he blamed the Jewish community within the United States and Mexican government for the distribution of marijuana across the nation he said was an effort to “feminize” black men, also blaming Jews for the death of Jesus for good measure.

The organization was soon faced with fierce bipartisan criticism, calling on the activists to condemn the hate preacher and his organization for the “unapologetic bigotry” towards another marginalized group — a key component of why the feminist movement, among all their virtue signaling, has embraced the organization.

Did the Women’s March listen to their principled progressives and act?

Of course not. At least not initially — or to great effect.

Mallory at first doubled down on her relationship with the Nation of Islam and the hate preacher, tweeting after the event that “If your leader does not have the same enemies as Jesus, they may not be THE leader!”

If your leader does not have the same enemies as Jesus, they may not be THE leader! Study the Bible and u will find the similarities. Ostracizing, ridicule and rejection is a painful part of the process...but faith is the substance of things!

She, along with her fellow Farrakhan apologist colleagues Linda Sarsour and Carmen Perez, who curiously said “no leader is perfect,” cited the relationship as a form of “coalition work” necessary for their progressive movement— with them immediately backtracking on their defense of his record.

On March 7th, soaking in the silence, the Women’s March eventually released a public statement acknowledging that Farrakhan’s views were “not aligned with the Women’s March Unity Principles, which were created by women of color leaders and are grounded in Kingian nonviolence” — treating his vilification of Jews as some minor disagreement to play PR footsies with, rather than something deserving of outright condemnation (which, of course, they did not do).

Anti-Semitism, misogyny, homophobia, transphobia, racism and white supremacy are and always will be indefensible.

2. The tweets by both Mallory and Sarsour have not reflected the spirit of this statement. And still don’t.

3. They would never treat people who condone racists with such thoughtfulness (and shouldn’t).

In Mallory’s op-ed piece for NewsOne:

“I didn’t expect my presence at Saviour’s Day to lead anyone to question my beliefs, especially considering that I have been going to this event regularly for over 30 years. I first went with my parents when I was just a little girl, and would begin attending on my own after my son’s father was murdered nearly 17 years ago. In that most difficult period of my life, it was the women of the Nation of Islam who supported me and I have always held them close to my heart for that reason.”

It is impossible for me to agree with every statement or share every viewpoint of the many people who I have worked with or will work with in the future. As I do not wish to be held responsible for the words of others when my own history shows that I stand in opposition to them.

I also do not think it is fair to question anyone who works with me, who supports my work and who is a member of this movement because of the ways that I may have fallen short here or in any other instance.”

Mallory has taken several selfies with Farrakhan, including one on her Instagram where she said: “Thank God this man is still alive and doing well. He is definitely the GOAT [Greatest Of All Time].” 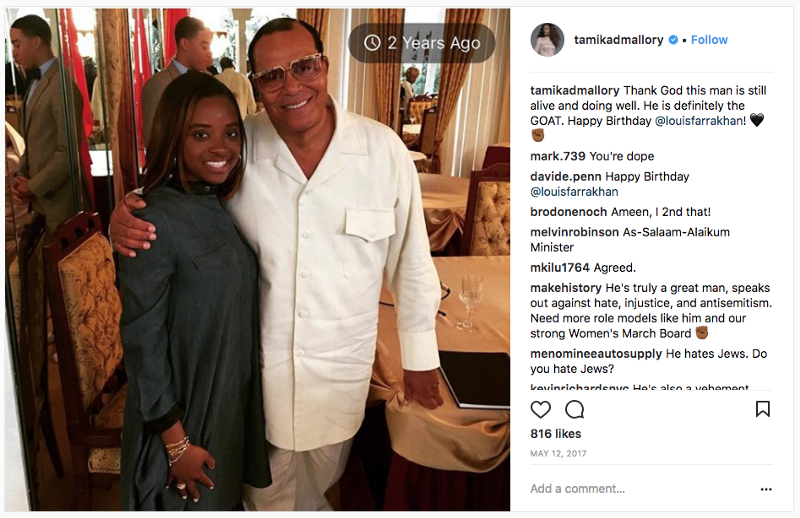 Planned Parenthood, a very close ally of the Women’s March organization, officially disinvited Mallory as a keynote speaker for their March luncheon following her continued ties with Farrakhan.

This was followed by a Change.org petition by Brooklyn activist Tali Goldsheft, demanding the organization cut relations with the Nation of Islam and even purge its leadership.

“If these Women’s March leaders are attending his sermons and cheering him on, they should be called out and removed from their roles immediately.”

I regret to inform Ms. Goldsheft that Linda Sarsour, the most outspoken member of these utterly flawed power-puff feminists, spoke at the Nation of Islam event back in 2015.

TrigTent previously reported on how Sarsour blamed the “Jewish media” for her unpopularity, suggesting potential retaliation against those who contradict her narrative that she and Farrakhan are “friends” of the faith.

“If what you’re reading all day long… in the Jewish media is that Linda Sarsour and Minister Farrakhan are the existential threats to the Jewish community, something really bad is gonna happen and we gonna miss the mark on it.”

Failing to clarify what that “really bad” something is — Sarsour being the kind of activist that wants to wage “jihad” against the Trump administration while later crying in the op-ed section of The Washington Post that she’s the victim of the catch-all term “Islamophobia.”

Such apologetics for hate, masked with a progressive blanket, is a failure on the Women’s March’s part. Should they want to maintain their moral high ground, claiming to be the ethical answer to President Trump and those of the right, known for questionably toxic relationships with anti-Semites, the left shouldn’t grant them ground for this being in the realm of normal discourse.

To restore credibility would require the vigorous condemnation of Farrakhan, Sarsour, and company until such hatred is either reformed to nonexistence or ostracized from societal respect. You can’t spearhead a movement based on opposing bigotry and continue to lead it with a known bigot at your hip — and this is understood by the Women’s March’s regional associates, in both the United States and Canada, who have condemned their overarching leadership over their inaction. Movements like Justice Democrats, while they coerced the removal of their founder based on deleted shitposts from over 20 years ago, at least purged their leadership to maintain their puritanism — even if the merit for that decision wasn’t truly justified in the slightest.

Farrakhan is no edgy shitposter, however. He is a legitimate voice the Women’s March continues to associate with —while refusing to deal with clear hatred with any honesty or the following of their intersectional feminist principles. Progressives can’t claim he’s irrelevant if they continue to make him the opposite. If they can’t give the sensible public that much, we may have to find leaders elsewhere.