“Race is a business,” once tweeted Candace Owens, a fierce critic of identity politics and the communications director of Turning Point USA. “Don’t you ever forget that people like Al Sharpton, Maxine Waters, and Jesse Jackson are the top execs. They live in million dollar mansions to ensure that the rest of black America never gets the chance to. Business has been good.”

Race is a business—don’t you ever forget that. People like Al Sharpton, Maxine Waters, and Jesse Jackson are the top execs.
They live in million dollar mansions to ensure that the rest of black America never gets the chance to.

Business has been good.

This observation implies that such an industry should be viewed as deceitful, racist and an unworthy venture for the likes of Owens and her growing base of right-wingers. While her millions of supporters often speak the talking points of rejecting identity politics, it’s their actions, as well as their wallets, that speak louder than fake words.

During the height of Owen’s so-called “#WalkAway” and “BLEXIT” campaigns, which are essentially right-wing identity politics movements calling on black voters to reject one of the mainstream political parties to join the other, a Twitter troll saw this as the golden opportunity to scam these blind MAGA worshipers by starting a GoFundMe pretending to be an oppressed black female Republican.

At first it seemed that right-wingers rallied behind an unknown black college student literally named Quran because it was somehow their duty to help their fellow MAGA devotees in need, especially if they’re of a special racial group they explicitly want to court. As far-left blogger Alex Bollinger also wrote, it seems that “white Republicans are desperate” to find their own “metaphorical black friend” to combat their ideology being accused of racism.

Thus, as Quran’s fundraiser grew in both money and attention, the con-artist showed that Owens was correct in saying the race business is booming, though not in the way she originally anticipated. As first reported in an interview by Elle Magazine, the girl began a fundraising con-job by tweeting:

“I will not hide any longer,, the left has made us feel as if us black republicans should hide!! but not anymore!! #BlacksForTrump #WalkAway #MAGA”, attaching a photo of herself with a red bucket hat emblazoned with the president’s famous “Make America Great Again” slogan. 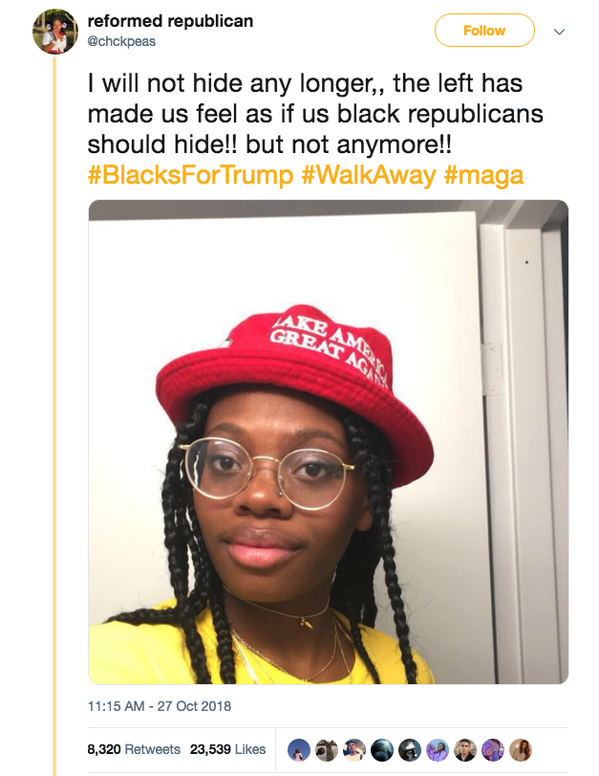 Within a few days time, her tweet went viral by garnering thousands of likes, retweets and comments from right-wingers condemning her “evil libtard” parents for kicking her out of the family home — all for supporting their guy!

Her post was soon followed up with a forged screencap of text messages between Quran and her left-wing mother, collecting a bunch of sympathy and oppression points from Trump supporters by writing she had a two week mandate to leave the house or face life on the street without financial support. The GoFundMe page went live shortly after. 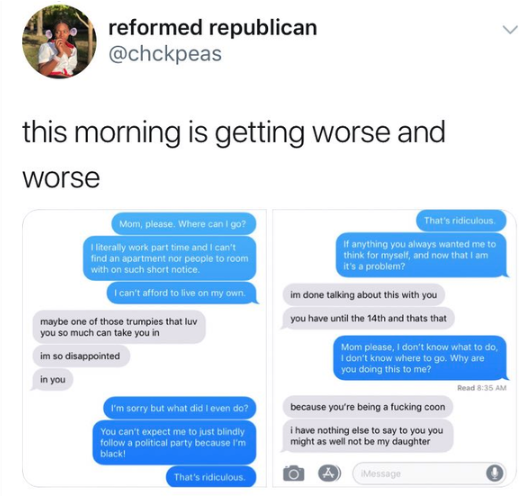 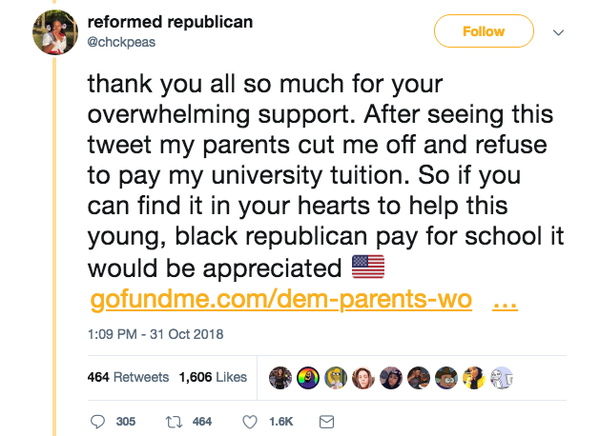 “If you can find it in your hearts to help this young, black republican pay for school it would be appreciated,” she posted once more. The campaign, which has since been deleted, resulted in Quran securing a now debatable $150K in pledged donations from this new-found base of factless, emotionally-manipulated right-wingers.

In subsequent tweets, their newly beloved ‘reformed republican’ wasn’t who she claimed, issuing the big reveal over Twitter by saying she’s actually a leftist who planned to use the money to buy herself a new iPhone XS Max, pay off her college tuition, her rent and then buy a few dozen-plus more phones on top of that. 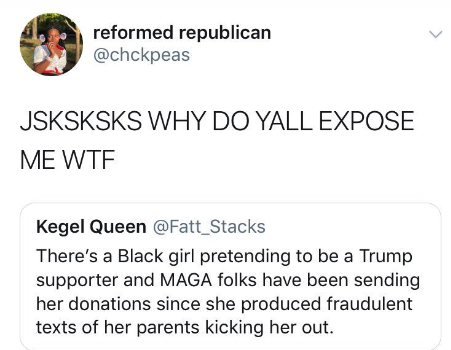 “Hot take: stealing from republicans isn’t bad because republicans arent ppl,” she wrote the very next day. “Trump is a racist, homophobic, transphobic, bigot AND YOU THINK MY BLACK ASS WOULD SUPPORT THAT ROTTING CARROT? Ridiculous. Any black person can put on that ugly ass hat and say #MAGA and y’all will instantly be up their ass cuz you wanna prove so hard you’re not racist, but you are,” she continued, “in the policies that you choose to vote in, effectively still separating us, etc. politicians work for the rich but you still think they’re in your pocket?? HA!! get a fuckin grip. [You] love to say democrats dont think but y’all dont either… just like YOUR president.”

Understand that with con-artists, their act never stops until all parties, from their defrauded victims to the press covering their supposed grand schemes, are wrapped around their little finger.

We won’t be falling into this trap, be it a liberal or conservative scheme. Quran, who also goes by the name Karen (or the Twitter handle, @chckpeas), just can’t keep her story straight. There is a tale of two narratives here. The first is that she pulled off what can easily be described as the scam of the year, telling Elle it all started out as a joke that escalated to the point of overwhelming “Confederate dollars” exploding into her bank account. The second narrative, however, is complete denial the job happened to the extent she originally suggested, painting herself as the innocent shitposter who violated no rules and is within her rights to gloat.

“I saw that other black girl that posted about being a black Trump supporter,” she said, referring to Owens, “and I wanted to make fun of her. The Republican Party needs black faces, so they throw money at any black person that says they support Trump so that people stop thinking of them as the ‘racist party’ But it’s never going to happen.” She later posted a screencap of herself purchasing the lavish iPhone, which is obviously worth a few hundred dollars, as proof Republicans just gave large amounts of money.

In another report published by New York Magazine, however, the con-artist also states she actually did nothing wrong since not only were the thousands of dollars refunded, that total was all just an elaborate rumor to gain more internet attention. “I just felt really weird about taking their money,” she said. “This could go south really fast, so I just decided to refund everyone and give their money back. I think it was like maybe $200 at that point,” providing the journalists screenshots of emails showing the apparent chargebacks (which, if you know anything about GoFundMe, is not possible except in rare administrative circumstances).

If the original text message screenshot was a fake, after all, how can we know the phone purchase or the chargebacks are real either? Her con also wouldn’t explicitly violate GoFundMe’s terms of service, stating that while her own political ideology and texts were false she actually could have used the money to pay for her tuition, just like the fundraiser promised. She sits in the morally gray area of con-jobs.

“The Trumpies saw my old tweets about Obama and realized maybe I might have been lying. But I was faster and took everything before it could be taken.” She has since made public shitposts saying she “can’t relate” to poverty because “MAGA bitches pay me to live.”

So what is the truth? Was it $150 thousand taken or was it $200 returned? Did this Twitter troll put on her shades and sail away into the night on a fancy yacht? Did she just post an elaborate prank and bought lunch as she went about her college days? Did she do this to scam Republicans? The media? Or is she playing both sides to always come out on top?

Whether a few Republicans lost a few dollars in the free market means little when thousands were just exposed as overeager partisans ready to carelessly adopt identity politics when given the chance to appear non-racist, and it took an attention seeking Twitter troll to convey the point.

“Imagine if the Republicans had put as much energy into actually helping this country and not lining the pockets of the filthy rich as they do getting their racist image washed,” the con-artist signed off through Twitter DMs. “A lot of Republicans have this idea that everyone thinks Republicans are mostly racist and they’re really desperate to get that stigma off of them. I just felt like capitalizing on that. I honestly didn’t want to take their money… I just want everyone to think I’m the finesse queen, which I am.”