President Donald Trump, the notorious troll-in-chief, has used the left’s rhetoric against them in a malicious effort to strip transgender citizens of their civil rights protections. According to a new report from The New York Times, the president’s Department of Health and Human Services (HHS) issued a memo ordering a new interpretation of Title IX, the federal civil rights law that bans discrimination in federally funded schools, declaring that:

“…sex would be defined as either male or female, unchangeable, and determined by the genitals that a person is born with. Any dispute about one’s sex would have to be clarified using genetic testing.”

“Sex means a person’s status as male or female based on immutable biological traits identifiable by or before birth,” the HHS memo reportedly reads. “The sex listed on a person’s birth certificate, as originally issued, shall constitute definitive proof of a person’s sex unless rebutted by reliable genetic evidence.”

For more context, Title IX of the Education Amendments Act of 1972 reads:

“No person in the United States shall, on the basis of sex, be excluded from participation in, be denied the benefits of, or be subjected to discrimination under any education program or activity receiving Federal financial assistance.”

Neither the Times nor the government has released the memo for independent review and the HHS, the primary agency working on this drafted proposal, told CNN they refuse to comment on “alleged leaked documents” which they didn’t outright deny exist. From this, the document is most likely real despite being locked behind both federal and mainstream corporate media gatekeepers.

It’s expected this policy change could be adopted by other government departments, such as Education, Justice, and Labor, leaving the public in the dark about the exact definitional reforms they’re enacting. In addition, there are an estimated 1.4 million Americans (0.7% of the population) who live with a conflicting sex and gender identity issue, currently unsure whether they’re recognized as protected citizens by government civil rights laws.

This lack of transparency is a problem since the trans discussion not only specifically differentiates between both sex and gender, although these terms are carelessly used interchangeably across media outlets when describing the leaked memo, we also don’t have a clear idea how the government will address the trans question and their civil liberties moving forward.

What is clear is that Trump’s latest reform didn’t emerge in a vacuum. It seems the memo follows his reactionary pattern of “making America great again” by repealing nearly any and all decisions made by the Obama administration, once again taking a swipe at the previous government for extending anti-discrimination rights to the transgender community.

Ironically, the rhetoric and actions of these administrations have flipped.

President Obama — through his embrace of pro-trans civil rights protections on healthcare, education, housing, military service, etc. — seemingly conflated sex with gender as a broader term for universal application. Most controversially, this conflated definition allowed his administration to apply the rule to school bathrooms and locker rooms, releasing a guidance that asked federally funded schools to let trans students use the facility that corresponded with their gender identity instead of their sex at birth. Despite this good intentioned albeit unprogressive rhetoric, anti-trans lawsuits contesting the issue were denied on principle by several judges, though such gender discrimination cases have never reached the Supreme Court for official validation legally.

President Trump — through the use of some progressive definitions — would exclude transgenders from the law by reaffirming their own argument that sex, referring to the biological, is not the same as gender, which is seen as the state of being feminine or masculine psychologically/interpersonally. In addition, the Trump government show no intention of adding gender to the law, effectively limiting the principle of Title IX only to protect sex.

According to the Times, the HHS holds the private position that the term “sex” was “never meant to include gender identity or even homosexuality, and the lack of clarity allowed the Obama administration to wrongfully extend civil rights protections to people who shouldn’t have them.”

“This takes a position that what the medical community understands about their patients — what people understand about themselves — is irrelevant because the government disagrees,” said Catherine Lhamon, former leader for the Education Department’s Office for Civil Rights during the Obama era, during her discussion with the Times.

This begs the question: is there still an argument that transgender people are relevant to these sex-based protections?

Major scientific organizations, such as the American Medical Association (AMA) and American Psychiatric Association (APA), have concluded there is a psychological reality to gender dysphoria and its relevance to the mental state of being men, women or androgynous actors. We’re not always talking about the hyper-performative drag queens. Pro-LGBTQ advocates, citing the legal precedent of the 1998 SCOTUS case, Oncale v. Sundowner, often defend the universal protection of the past. They’re built on the same principles of defending immutable characteristics, leaving little room for double standards unless you’re consistently against all anti-discrimination laws.

Joshua Block, an attorney with the ACLU, told Vox the Court once unanimously agreed that its bans on sex discrimination prohibit same-sex sexual harassment. His argument is the principle for prohibiting sex discrimination extends not only to sexual orientation (already deemed legally legitimate) but to gender identity as well, which is arguably closer in subject matter.

“Oncale says that’s irrelevant whether [Congress] contemplated it,” Block stated. “This is literal sex discrimination. Whether or not that’s what Congress was focused on doesn’t make it any less a type of discrimination covered by the statute.”

Trump’s new definition, seemingly based on a political agenda more than substantial citations about biological vs. psychological identity, could both defy the court’s broad precedent and prove unconstitutional if contested, even though progressives have used the same line of reasoning in the past. With this move, we’re once again shown how the president’s anti-LGBTQ actions often contrast with his previous pro-LGBTQ rhetoric. 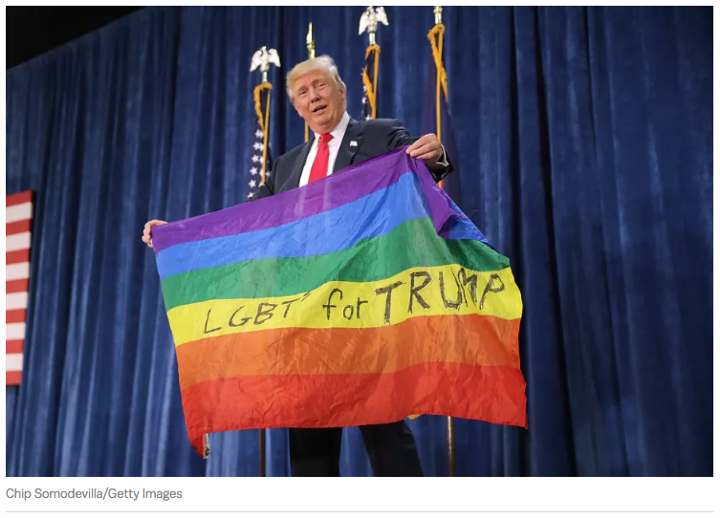 In 2016, then-candidate Trump once held up a rainbow Pride flag at a general campaign event and vowed to work for “L, G, B, T … Q” people at the GOP national convention, which received a round of applause from the right-wing crowd in attendance. He even initially defended the right of Caitlyn Jenner, a transgender woman, to use the bathroom that aligns with her gender identity. In reference to a mass shooting at a gay club in Orlando, Florida, he tweeted:

“Thank you to the LGBT community! I will fight for you while Hillary brings in more people that will threaten your freedoms and beliefs.”

These are all good signs, but instead, we’re left with the lesson that a shit-talker’s words mean very little if the actions are working against the citizenry in question. “People debate, ‘Does he personally like or dislike LGBT people?’ That’s irrelevant,” said James Esseks, director of the ACLU’s LGBT and HIV Project, speaking to Vox. “He has put in place people who have firmly anti-LGBT agendas, and he’s not just enabled but endorsed those agendas himself. He’s been a train wreck for LGBT people nationwide.”

Instead of leaving well enough alone or giving trans activists a protective olive branch, the government is determined to prolong this slanted gender debate when it’s so two years ago. Republican states are also behind the president, as under federal and most states’ laws, discrimination against LGBTQ people, based on sexual orientation and gender identity, is not explicitly prohibited. That same Vox report found around 28 states, the majority of which held by the GOP, offer little to no civil rights protections on this basis. 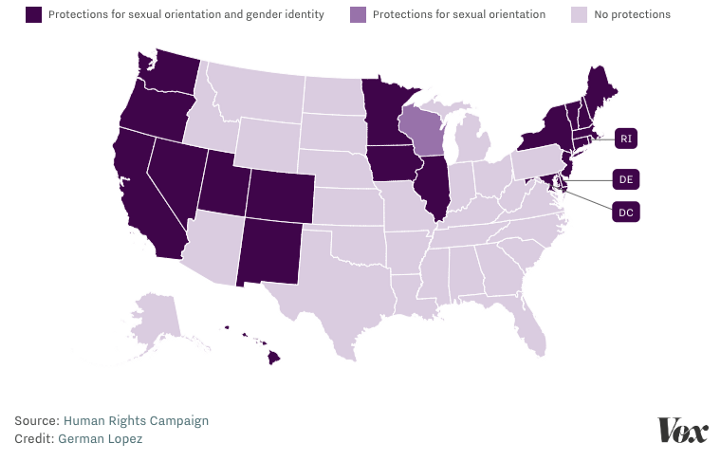 These standards show better results when it comes to race-based protections enacted since the revolutionary civil rights era of the 60s. “This means that it’s not explicitly illegal for someone to be fired from a job, evicted from a home, or kicked out of a business just because an employer, landlord, or business owner doesn’t approve of the person’s sexual orientation or gender identity,” journalist German Lopez wrote. “The exclusion of LGBTQ people is a big hole in civil rights laws, which generally ban discrimination based on race, sex, and religion, among other protected categories.”

Assuming the president isn’t against the civil rights act and its principles from legislation past, such double standards are a plenty when it comes to Trumpism, so don’t hold your breath for consistent legal protections for the LGBTQ across the board.

“Transgender people are frightened,” Sarah Warbelow, the legal director of the Human Rights Campaign, told the Times. “At every step where the administration has had the choice, they’ve opted to turn their back on transgender people,” joining in the latest social media effort from trans activists to say “#WeWontBeErased.”