Well, it’s official – Donald Trump’s star on the Hollywood Walk of Fame has been destroyed with a pickaxe for the second time, thus effectively ending his tenure as sitting president.

How did the Democratic Party not discover this little-known rule of the American political system sooner?

You’ll have to excuse the sarcasm - I guess I don’t have the same appreciation for taking pickaxes to things I don’t like as 24-year-old Austin Clay, the pickax-er in question. It’s not that I feel any sympathy for President Donald Trump (a man who deserves much of the criticism he gets), or his Hollywood Star for that matter. It’s not even that I don’t understand the feeling of catharsis that probably washed over Clay while he was doing it.

No, my problem is the zero subtlety and less than zero effectiveness of simply destroying someone’s shit because you hate their politics.

The problem here is two-fold:

1. It is not creative or thought-provoking in any conceivable way.

2. It is going to be weaponized by Trump as further proof that everyone is out to get him and that his opponents have truly lost their minds.

The first part is the one I have more nuanced feelings about. I believe that political expression (angry or otherwise) ought to be encouraged in a free and open society. But for the love of god, put some thought into it. Like this tiny wall, complete with barbed wire and “Keep Out” signs that was built around Trump’s star by street artist Plastic Jesus: 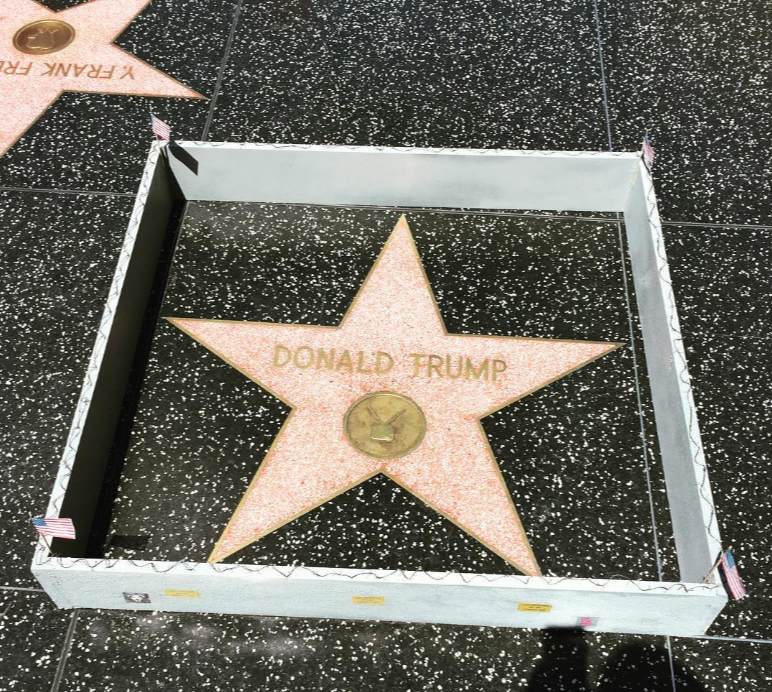 It’s clever. It makes a point. It’s something to think about. Beating the shit out of the ground with a pickaxe under the cover of darkness? Not so much.

Okay, so that’s the first part. But it’s that second bit that’s much more important. This comes off looking like a hysterical act of anger – and that’s just the way it’s going to play on all the right-wing websites and amongst the conservative punditry when they sell it as another example of “triggered liberals” unable to confine their rage to the proper political channels. And when you look at the futility and ineffectiveness of something like literally pounding the pavement, it’s not hard to understand why Trump’s base will eat up the narrative of victimhood. When Trump inevitably tweets about this under the guise of a personal attack, it won’t just be an attack on him, it will have become an attack on all of the values he represents to those supporters.

We hear an incredible amount both from the political left and right in the western world these days that politics has become too divisive, and I believe it’s unnecessary shit like this that moves the needle further. There’s no commentary here, there’s no critique – there’s just crushed pavement, more political controversy, and a political dialogue that still isn’t happening.

Nigel Lokai is the editor of TrigTent, as well as the co-host of TrigTent’s “Triggered” and “Off The Rails” podcasts.