Thanksgiving is usually a holiday of altruism. As millions of Americans spent the festive day surrounded by their beloved friends and family, avoiding political divides both social and economic, an organized campaign of men’s rights activists and right-wing “incels” spent their time intimidating online sex workers by reporting their social media accounts to the Internal Revenue Service (IRS) for suspected tax evasion without sufficient evidence.

The campaign rose to prominence when right-wing shitposters began collectivizing under the #ThotAudit hashtag. The term “thot,” for those unfamiliar with such internet slang, stands for “that hoe over there” and can easily apply to popular online harlots who trade nude content of themselves for lustful attention. For those with the right ego, body and branding, the online sex industry yields plenty of rewards, and apparently inspires a lot of sexual frustration.

Enter the “manosphere,” the dark hive of online forums often frequented by male members of the far-right, where irritation for women’s sexual liberties abound. On Sunday, such dissatisfied “involuntary celibates” and “meninist” activists took attention away from their complaining about the opposite sex to snitch on the sexual promiscuity of social media’s most eligible “thots,” to the point it even caught the attention of the IRS themselves:

By law, #IRS must notify @StateDept of seriously delinquent tax debts. Remind your client to check available payment options so she does not put her passport at risk. https://t.co/m7SOsyidy9

Like all lavish online scandals, it started out as a simple joke.

According to the leftist publication Right-Wing Watch, it was an anti-SJW activist by the name of David Wu, an admin for the Facebook group “Ancapistan,” who released a post calling on thousands of members to inform the IRS of any and all sexually provocative female accounts for alleged tax dodging. The post eventually reached an audience of over 18k users, meanwhile the comment section filled with targeted user handles and government dispatch links to be used for their harassment pleasure. Mob justice had truly begun.

“LET’S FUCKING GO BROTHERS,” Wu writes. “RISE OFFICERS! RISE! MUHAHAHAHAHA. LET’S REPORT THEM TO THE FORBIDDEN FORCE!” This cause was later picked up by far-right users on Reddit and 4chan who said “while taxation is theft, the best way to end the ‘pink tax’ is to tax sex workers the same as EMT and firefighters.” 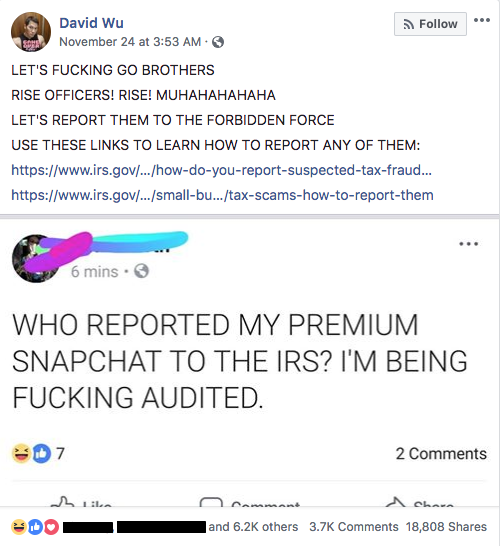 The movement began trending after a Twitter thread was posted by Daryush Valizadeh, the online pick-up artist otherwise known as “Roosh V,” who endorsed this sex worker crackdown by declaring failure to report online income made by body parts as a felony charge. When Roosh isn’t making notoriously misogynistic comments saying “there is no greater waste of time than debating a woman,” which surely fosters his incel community’s anti-female sentiment, they’re sicking the taxman on the same disfavoured sex. His support for their cause was truly a match made in hell.

Men are aggressively organizing to report all thots. I don't blame them: these girls are getting a free ride via beta bux and a broken sexual marketplace that is rigged in the favor of females. pic.twitter.com/qgwVnbmf0b

Generation Zyklon males are sick of thots and how they turn every platform into yet another way to whore out their bodies. This man was banned from Twitch for speaking the truth about it. pic.twitter.com/7sElufAFXg

“Online thots are finding out that all income generated from their breasts and vagina is taxable,” Roosh wrote.

“Generation Zyklon males are sick of thots and how they turn every platform into yet another way to whore out their bodies,” he continued. “I’m finding it hard to believe that women are not reporting income that is direct deposited into a bank account linked to their social security number, but their anger at the #ThotAudit shows that’s exactly the case. It’s like they think laws don’t apply to them or something.”

On a podcast about the effort, Roosh elaborated on the movement by stating “a lot of these frustrated young men who are tired of hoes coming on their platforms and ruining it”. Citing Wu’s rant video, Roosh immediately took joy in the idea of enforcing the law in this selective fashion to show “invading a male space to show your boobs and your butt” is a punishable offence.

Roosh even went on to accuse Brittany Venti, a popular gaming streamer on Twitch, of setting her Twitter account to private for allegedly selling nude material for donations, though no evidence was presented. IRS forms regarding potential tax evasion must include private information such as social security numbers, addresses, the dollar amounts of suspected unreported income and evidence of criminality before an investigation can be conducted. Thots are still protected by due process, after all.

In this instance, the conservatives’ knee-jerk hatred of women, nestled between genuine taxation concerns, overshadowed their principled hatred of taxes in general. There’s an argument for some form of taxation when it comes to sex work. If you’re a freelancer who supports the social safety net from universal welfare to police protection, which is your entitlement as a citizen, you’re expected to pay the suitable rate based on your income. In the United States, income as little as $400 per year must be reported, which include PayPal donations. It’s quite the harsh line, sure, but Roosh is right when he states “your vagina isn’t a 501(c)(3) charity.”

The taxation debate isn’t as simple as men vs women though. As written by popular vlogger Boogie2988, if sex work is indeed a “real job” as sex workers claim, which is a legitimate trade given it’s a legalized liberty across certain industrialized nations, these workers should “do your patriotic duty and pay for the roads.” On the other hand, Boogie continues, “I refuse to pretend this is some crusade designed to help the government. Call it what it is. The usual crusade against sex-work. Ladies and gents. Pay your taxes. If you genuinely care about tax evasion let’s talk about corporate welfare.”

These conservatives voices never offer staunch, baseless tax enforcement when it comes to their favored economic policies, their politically aligned free market institutions or even their “very smart” President Donald Trump who famously bragged of his tax evasion tactics during the 2016 presidential debates. Amanda Marcotte, the senior political writer for Salon, gave comments to Right-Wing Watch explaining how such far-right movements are hypocritically willing to “utilize the government to reinforce their assertions of dominance” over the opposite sex.

She writes: “Unfortunately, it’s common to see misogynists try to use the power of the government to oppress and control women. In recent years, we’ve seen alt-right types online use falsified calls to the police, resulting in SWAT teams showing up at their homes, to terrorize people who speak up for social justice. Authoritarians see the government as existing to maintain gender and racial hierarchies, and so are comfortable exploiting government power this way.”