This goal of simplifying the online digital space and explaining far-right radicalization would be noble if the report weren’t littered with bias, careless methods, inaccuracies and outright lies which push an activist narrative calling for big tech gatekeeping. The report wants readers to understand the social and algorithmic way viewers can go from being a standard classic liberal, watching lackluster Dave Rubin content, to falling down the red pill rabbit hole of white ethnostates and neo-fascism endorsed by the likes of Richard Spencer and Mark Collett.

There’s nothing wrong with seriously investigating these trends. Giving people knowledge of modern influencers, their boasted philosophies and how radicals exploit their popularity to gain recruits can only strengthen our political understanding of not just ourselves, but our indoctrinated opponents, To my disappointment, the report simply doesn’t offer such understanding, acting more as a carelessly drafted, partisan blog post that’s happy to make assertions which can’t be backed up on its own academic merits, as sneakingly admitted by the author throughout her piece.

Lewis cites the example of talk show host Dave Rubin having a conversation with Canadian right-wing influencer Stefan Molyneux on his YouTube program “The Rubin Report.” She specifically took issue with how Rubin addressed Molyneux’s claims on “scientific racism” and the claims of differences in average IQs across the races in test results.

The exchange went as follows:

Rubin: “Is there evidence it’s genetic?”

Molyneux: “They are different sizes.”

While we won’t touch these racial claims with a 10-foot-pole, we’re very curious how Lewis concluded that “the AIN as a whole facilitates radicalization,” forcing countless articles across the mainstream media to scare their audience into demands for censorship. We’re happy to hear the empirical data to prove their case. Instead of presenting us with rich findings using thorough scientific methods, Lewis worked backward from her conclusion and still failed at connecting the dots.

Throughout her study, Lewis continually demonstrates what YouTube content creator Dr. Layman calls the “first-semester fluke.” This is where she begins on clueless grounds by saying “it would take more empirical research to determine the extent to which guest appearances like Molyneux with Rubin effectively radicalize viewers,” admitting she knows little about the hard evidence her study is meant to provide, while merely cherry-picking a select few YouTube comments from random users and content creators in order to support her pro-censorship narrative.

“Wow,” one random Rubin Report user wrote. “I never heard of this guy before & they started off talking about how he is super controversial & hated but I watched the whole thing & I didn’t hear anything that I would consider controversial. He seems to be extremely intelligent . . . I’m going to subscribe to his channel & check him out.”

She even delves into political commentary in saying “by letting [Molyneux] speak without providing a legitimate and robust counterargument, Rubin provides a free platform for white supremacist ideology on his channel,” and has thus been some form of gateway drug to the far-right’s red-pills.

Now sure, this could be an example of one guy subscribing to a very questionable character, which could be echoed down the line by likeminded individuals. This is a problem, but it shouldn’t need explaining why wielding one piece of anecdotal evidence to explain away the complexity of the entire political internet is terrible research, let alone academically illiterate to the point it’d never actually reach the process of peer-review. The piece is littered with these cherry-picked examples of Lewis’ attempts to show how YouTube has turned into a literal intellectual dark web — “toxicity” and all — without much data that separates her from a standard internet blogger.

Her attempts at science end with her use of “The Snowball Method,” a social scientific approach used to unearth criminal rings and other groups where contacts upon contacts can be comprised into a web of characters showcasing the key players of any given subculture. Through this, Lewis was able to provide a material analysis of both the content these YouTubers create “(what they are saying)” and their overall relationships across the platform “(who they are broadcasting with).”

By the end of her scouring through hundreds of hours of content (which barely scratches the surface of a handful of political YouTube channels) she was able to pin a total of 65 influencers across 81 YouTube channels, presenting us with a chart that basically shows politics, one of the most discussed topics in history, generally entails people talking with one another.

To quote the cited Paul Joseph Watson: “Imagine my shock.” 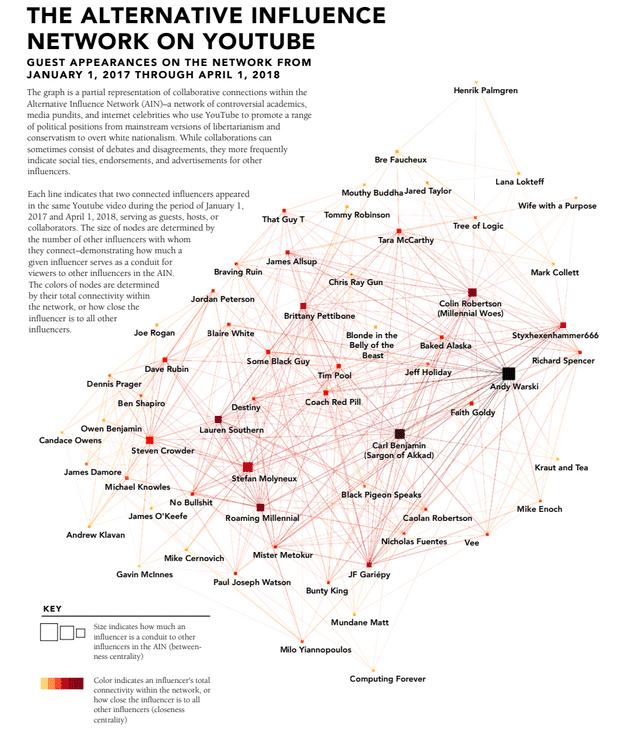 Overall, this is a fine approach to enlightening readers on the unknown players through the YouTube political sphere. Lewis, like Dr. Layman, could have cited The International Journal of Research & Method in Education as a defense of how this is considered an “applicable method to use for mapping hidden populations in educational settings.”

The only problem with her graph, other than appearing a confusing conspiracy drawn in messy crayon, is that it fails to explain absolutely anything other than how much YouTubers talk to each other, leaving the context of these encounters up to the minds of those reading. It was this very same academic journal that warned social scientists that “qualitative studies are needed in order to interpret the [method’s] networks in real-life contexts.”

In translation, the chart doesn’t provide any information of the ideologies of these contacts (which range from liberals to conservatives to libertarians to the alt-right), and whether these interactions consisted of polite discussion, agreement, or in the context of vicious debate between opposing ideologies. The graph makes no effort to explain these relationships, whether through honest examination one would expect of an interested blogger or an academic analysis of how these encounters occur across time. One brief example listed is Carl Benjamin (a.k.a. Sargon of Akkad), who is heavily connected throughout the graph, and his conversations with alt-right speakers Spencer and Colin Robertson (Millennial Woes).

These men fundamentally disagree on the principles of white nationalism, evidenced throughout their debates on Warski Live and their personal YouTube channels, but often agree in their hatred for modern-day social justice activists and the culture of the far-left. “In many ways, we do have similar objectives. . . .” Benjamin said. “We have the same enemies, right? I mean, you guys hate the SJWs, I hate the SJWs. I want to see the complete destruction of social justice. If the alt-right took the place of the SJWs, I would have a lot less to fear.”

From this one bit of anecdotal evidence, you’d get the impression Benjamin is somehow a fellow traveler of the alt-right and spends his life trying to push their radicalism to success above leftism. This strips a frequently criticized character like Benjamin of his many liberal nuances, showcasing how one poor misunderstanding of the central figures of political YouTube, who honestly address social justice, the alt-right, and the center differently on their merits, rather than black and white responses across the board, should bring the whole graph into question.

Without any real critical framework to analyze the content, Lewis’ work comes across as inaccurate. Meanwhile, her one method also proves incomplete as Benjamin’s further left-wing contacts, such as comedian Shoe0nHead, philosopher Contrapoints, sex-educator Laci Green and feminist critic Anita Sarkeesian, are all left unmentioned in the snowball method. YouTube politics aren’t all center-right, after all. Other featured characters, from journalist Tim Pool to comedians Chris Ray Gun and Vee, are denying contact with Spencer and his ilk, citing an anonymous New York-based journalist who claims Data & Society privately revealed that certain connections were either “confusions of the visualization” or just untrue. 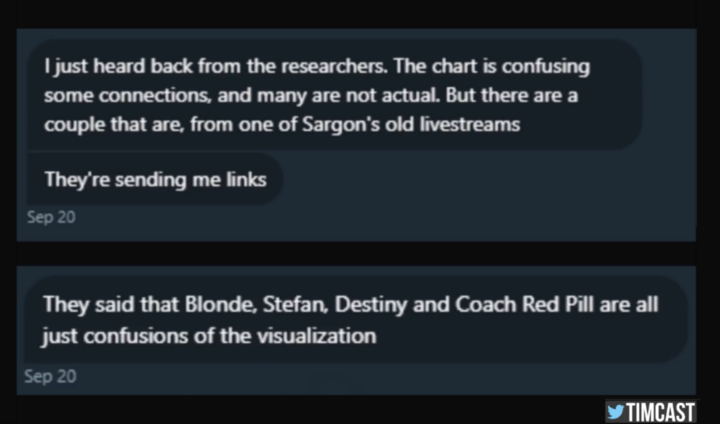 If we’re to take Lewis’ study at face value, where merely watching Benjamin turns you into a complete neo-Nazi by the presence of Spencer sharing his platform, she makes no argument why this transition would occur.

Dr. Layman suggests her views could be biased towards the theory of “The Hypodermic Needle,” a concept which assumes audiences are naturally mindless creatures who consume the messages of all the products they’re exposed to passively. This is no longer considered a credible theory as more deceptive practices, such as framing, priming, and relation to cognitive dissonance, play a role in forcing an argument to stick in the mind.

To our dismay, what we’re left with is bad research being used to justify an activist’s desired call to action. “These influencers explicitly reject the trappings of institutional prestige, adherence to objectivity and neutrality, and the enforcement of gatekeeping mechanisms that dominate mainstream news media…” Lewis writes. “YouTube must respond with policies that account for influence and amplification, as well as social networks.”

Within three hours of the study going live, The Guardian published an article hailing the study as more evidence of their narrative, followed suit by the aforementioned mainstream media outlets that appear to be issuing a coordinated hit piece to reign top the headlines throughout the day. In the end, there’s little substance to justify these new censorship cries other than Lewis’ own opinions slapped together in a messy study that doesn’t amount to more than being angry content creators talk with one another. As stated by Vox’s editor Ezra Klein, people shouldn’t just scroll through “one of the must underestimated forces in politics right now.” After all, when the president is a consistent Twitter shitposter, all bets are off.