Jimmy Dore Praises Boogaloo Boys: The Far-Right Are NOT Your Friends

Unlike certain members of the online left, I take no pleasure in destroying Jimmy Dore. In fact, I have to credit the self-described “dumb, jagoff, nightclub comedian” of controversy for my interest in politics in the first place, from admiring his show-stealing progressive rants on The Young Turks network to spitting in the face of Alex Jones, the crazy man who led harassment campaigns against the families of Sandy Hook victims. So when news broke that Dore had become a sympathizer of a far-right militia group involved in January's riot on Capitol Hill, I was left in a unique position of anger.

On January 24th, the Jimmy Dore Show featured an exclusive interview with Magnus Panvidya, a member of the far-right group known as the Boogaloo Boys who Dore witnessed giving a speech before the attack on Congress. Dore, whose prior knowledge of the group was limited to their political leanings and their choice in Hawaiian shirts, was seemingly intrigued by his notion that both left and right militia groups are “the anti-bodies to a corrupt political establishment,” going on to write that he was “completely floored when he said he is Pro-LGBTQ, Pro-Black Lives Matter, Anti Police Brutality, Anti Racism, Anti ICE, Anti War. WTF?!?!”

Understandably, many were left dazed and confused by the claims made by Dore’s elusive guest, leaving people to wonder whether their supposed bipartisan interests were too strange to be true even in this political climate. In just a matter of days, the whole saga aged like spoiled milk. The guest, bound to cause an online backlash, forced Dore to open his video with a warning message prematurely protecting himself from any critiques “which may be used to smear” him as far-right. “I’m already in big trouble for talking to this gentleman,” Dore acknowledges, clarifying that he’s “going to assume [Panvidya] is genuine” only in their claimed beliefs of political unity.

Unfortunately for Dore, pleading ignorance in case such a volatile interview went nuclear wasn’t an effective blast shield, resulting in takedowns from Newsweek, the Majority Report, the Doomed podcast, and the World Socialist Web Site, a known leftist outlet whose labor rights editor, Jerry White, was featured on the program unaware of Panvidya’s appearance preceding him. In the days following the segment, White and others in the online left condemned Dore’s behavior as more details about Panvidya and the Boogaloo Boys began to surface. So, who are the Boogaloo Boys exactly?

An investigation from Matt Binder, the host of the Doomed podcast, sheds a little light. Binder could only confirm Panvidya’s claim that the term “Boogaloo” is a reference to a notoriously bad 1980s breakdancing movie known as “Breakin’ 2: Electric Boogaloo.” In the interview, however, Panvidya wants us to believe this is all just the basis of their general ethos, carrying weapons and wearing Hawaiian shirts with tactical gear to distinguish themselves from the crowd. “It just means the bad sequel to original,” Panvidya claims, “and in our context, that just means any form of civil conflict,” not a racial civil war.

As Binder discovered, however, this is actually a disturbing lie by omission. The earliest reference to the boogaloo meme comes from a 4Chan post from 2012, calling on their fellow right-wing “patriots” to begin “Civil War 2: Electric Boogaloo” against the then-incoming Obama administration. In the years since, the meme spawned a loosely decentralized political movement working across the nation to incite this second civil war, operating through coded dog-whistles such as “boog,” “big igloo,” “blue igloo,” “big luau” and “the Boojahideen” to avoid crackdowns from both social media sites and the intelligence community.

These coded terms were confirmed by Benjamin Ryan Teeter, the 22-year-old former Boogaloo Boy who confessed to attempting to gain property, services, and weapons from Hamas, a designated foreign terrorist organization, as reported to Newsweek. Teeter was later charged with domestic terrorism alongside another Boogaloo colleague, Michael Robert Solomon, who were attempting to establish this “Boojahideen,” according to the FBI. In this context, Panvidya’s words are used no differently from their online operatives; chosen with careful consideration while carrying significant implications. After all, unlike the original “civil war,” a “civil conflict” can end peacefully, which sounds much more appealing to an uncritical audience.

As Binder further elaborates, the Boogaloo Boys largely try to keep their members on the same team, united under the banner of a big igloo, black and white stripes, and the names of martyrs killed under the government’s watch, regardless of the context behind their deaths. One of the more suspicious martyrs is Duncan Lemp, a former Boogaloo Boy member who was briefly mentioned in the Dore interview as being killed by the police during the execution of a no-knock warrant. In drawing a direct comparison to Black Lives Matter and the death of Breonna Taylor, Dore doesn’t challenge Panvidya on this subject. 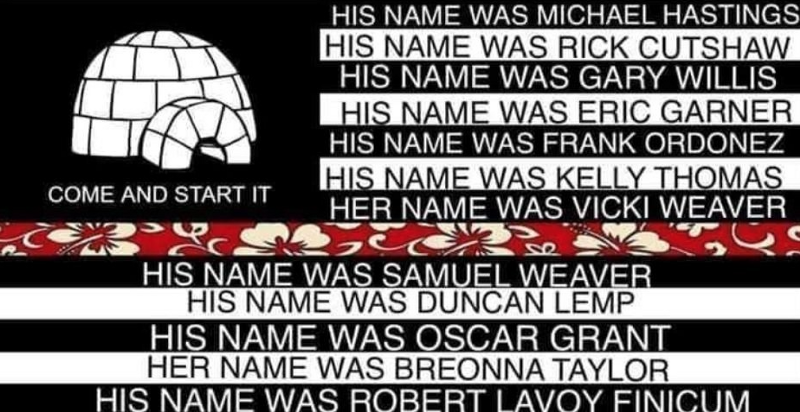 In fairness, the Lemp case remains under wraps pending any investigations, leaving us no ability to assess any similarity in how law enforcement conducted themselves. Naively taking the man at his word, Dore saw this as a moment to build a bridge from the left to the right. But don’t be fooled. As it turns out, this would be a one-way bridge that Lemp would burn at a moment most opportune, offering us key insight into the group’s true intentions for civil war. As Binder discovered, Lemp’s social media presence included an image with a curious quote reading “sic semper tyrannis.” This is a Latin phrase meaning “thus always to tyrants,” which suggests that unmerciful justice always awaits dictators. No exceptions.

It originates in reference to the assassination of Julius Caesar, the leader of the Roman empire, though its history in an American context has a darker meaning among the far-right. Most notoriously, the words are often attributed to John Wilkes Booth, the former stage actor who spent his mornings playing slavers like Caesar and his afternoons murdering slave abolitionists like President Abraham Lincoln, writing in his diary that he screamed the words during the assassination.

Holding no sense of irony, the far-right continues to use the phrase as a dog-whistle for justifying race war, such as when the modern-day domestic terrorist Timothy McVeigh, the Oklahoma City bomber, was arrested wearing a shirt with the phrase under a picture of Lincoln.

Throughout the interview, Panvidya is quick to dismiss these racist sympathies as a fringe element of the group, claiming there are only a few “idiots” within the movement who are actually violent and blames the social media industry for removing Boogaloo Boys from their platforms. Although it’s fair to criticize these removals for making it harder to track neo-Nazi groups, driving radicals deeper into the echo-chambers of Parler, 8chan and other alternative media sources, this is yet another lie by omission ignoring how they’ve acted when given free rein.

Since 2019, at least 31 people affiliated with the Boogaloo movement have been charged with crimes, including the killings of two security officers and the plot to kidnap Gretchen Whitmer, the governor of Panvidya’s state of Michigan. As Binder notes, Panvidya used to have social media accounts under the name Zakkari Clark, and he’s actually quite lucky for their removal given his involvement in the Reopen protests during the height of the Coronavirus pandemic, which had their ties to the kidnapping plot.

Binder also found several archived posts detailing his defense of a guy who shot BLM protestors and that he’d “wipe his ass” with the ANTIFA flag just as much as the Nazis, implicitly equivocating the fascists with the anti-fascists, both actions supposedly considered reprehensible by Panvidya during his interviews. Further, if Panvidya is the shining example of a good Boogaloo holding the far-right to account, it’s curious to see his sect of the group being represented by bad Boogaloos in Timothy Teagan (right), Panvidya’s friend who stood at his side during the original speech. In the photo, he’s seen standing alongside the likes of Daniel Harris and Pete Musico (middle), two of the men who were indicted and charged in the kidnapping attempt against Governor Whitmer. 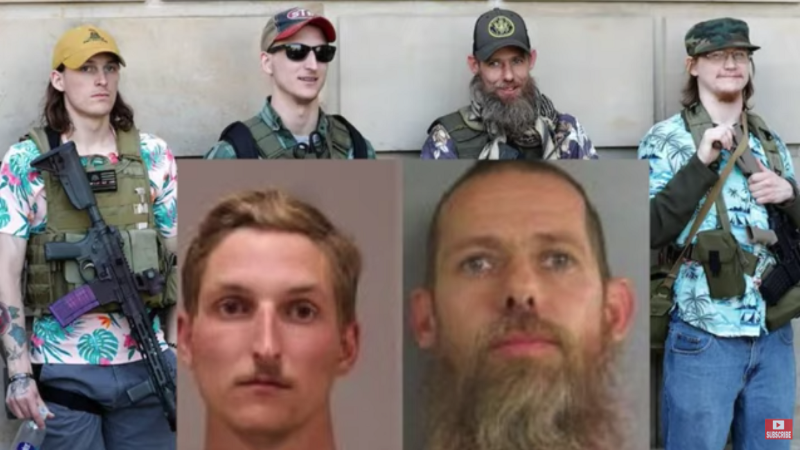 From all this, it’s clear to see how the Boogaloo Boys, acting in their group’s own radicalizing self-interest, simply used Dore’s platform as a means to sucker his audience. Through the anti-government rhetoric, members of the far-right use the online sphere as a way to sow the seeds of violence, and Binder’s video even shows examples of grassroots Black Lives Matter organizers resisting Boogaloo presence they found to be inciting further civil unrest, such as the wielding of guns.

Unfortunately, civil unrest is their entire objective, baked into the entire Boogaloo identity. And the trick simply isn’t working on everyone. Ultimately, content creators like Dore need to be held to account for enabling this behavior to spread in the first place, contributing to a climate where former fans like me once held sympathies with the far-right. As I wrote in my 2019 article, Making A YouTube Radical, these reactionary sentiments thrive on running away from critique. Introspection threatens their business model, and its people like Dore, whose entire brand relies on populist apathy, who allow this to happen.

“YouTube is the place to put out a message,” concluded Caleb Cain, a former white supremacist now working with deradicalization organizations, “But I’ve learned now that you can’t go to YouTube and think that you’re getting some kind of education, because you’re not. You have to reach people on their level, and part of that is edgy humor, edgy memes. You have to empathize with them, and then you have to give them the space to get all these ideas out of their head.” And if the political analysis is just radical centrism of a different stripe, pushing anti-intellectualism with reductionist beliefs that fascists and anti-fascists can beat standard two-party politics, they are no friend of your peaceful revolution.