Jacob Wohl, conservative troll and part-time con-artist, has another insanely fraudulent trick up his sleeve. In a recent fundraising document leaked to The Daily Beast, Wohl attempted to raise over $1 million from his investors in order to make the Arlington Center for Political Intelligence, a political betting service which he claimed would just “make shit up” to profit from bets made on the 2020 presidential election.

Wohl, known for using his mother’s phone line to organize fake intelligence agencies to smear his political rivals, promised his latest scheme would interfere with the upcoming elections by “planting stories” in news outlets and establishing online “troll farms” to spread damaging narratives about Democratic candidates. The organization’s stated goal was to infiltrate “every major Democratic 2020 Presidential campaign” to spy on them in an attempt to “help President Donald Trump win reelection.”

“As the Russian Internet Research Agency proved in 2016, building up leftwing internet properties that aim to ultimately suppress turnout is an effective strategy,” the document reads. “Due to the sensitive nature of ACPI’s work, discretion is of the utmost importance… Our backers will affect political outcomes and use our actional intelligence to reap rewards betting on those outcomes… Make shit up. Leak something sensational, extreme, sexual, scandalous, trending, or hate triggering… Backers will use ACPI’s insights in order to place profitable bets on these political outcomes.” 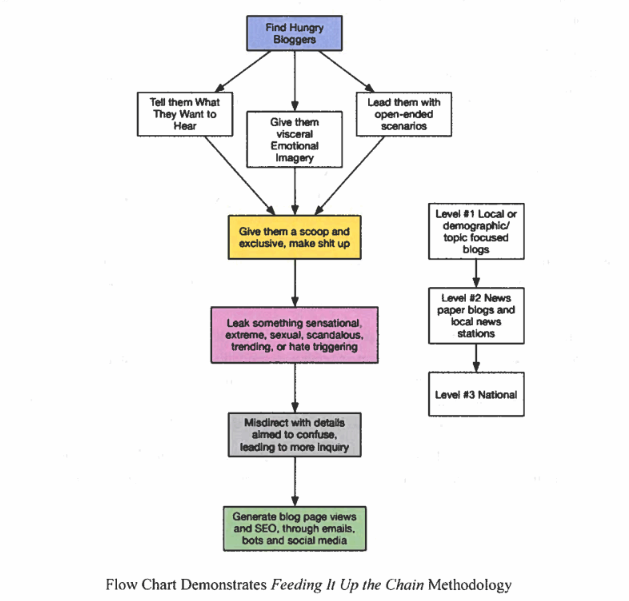 This would be shocking if Wohl already wasn’t such an incompetent repeat offender. In 2018, the notorious troll used another fake intelligence firm rathole, “Surefire Intelligence,” to accuse the Department of Justice’s Special Counsel Robert Mueller of sexual assault. Working alongside his conservative strategist turned huckster Jack Burkman, the two offered $20,000 in bribes to women who would make accusations against the DOJ’s watchdog.

Thanks to some not-so-secret company records, which included his own poorly redacted profile picture, it was soon revealed Wohl organized the fake accusations after all. As previously mentioned, calls made to the associated company number went directly to the answering machine of Wohl’s mother. Other members listed on the group’s LinkedIn page included random politicians, Instagram models, amateur models from stock photos and even supermodel Bar Refaeli and Hollywood’s own multi-award-winning actor Christoph Waltz. None of the people consented to the misuse of their images, of course, but it didn’t stop Wohl from exploiting them for his grift.

Odd. Jacob Wohl says he doesn't know nuttin' about Surefire Intelligence, the firm tied to the bizarre Mueller allegations. Take a look at the photos below of Mathhew Cohen, head of 'Surefire,' and of Jacob Wohl. pic.twitter.com/Q1rAW4wkPO

Instead of admitting to his faults, Wohl’s actions soon resulted in a rather embarrassing press conference where his fake Mueller accuser failed to show up and the 21-year-old was left stammering his way into pure denialism — which continues to this day. Most recently, Wohl and Burkman have been accused of attempting to smear political rivals through fake sexual assault allegations, persuading gay Republicans to lodge false sexual assault claims against 2020’s new Democratic presidential contender Pete Buttigieg. This resulted in a sketchy Medium post from Hunter Kelly, a Michigan college student, who claims they wrote the accusations without his permission. Both Wohl and Burkman deny their involvement.

“It’s important for everyone to know that I was not sexually assaulted and would never falsely accuse anyone,” Kelly wrote on Facebook this Monday evening. “To keep it brief for now, I was approached by a political figure to come to DC to discuss political situations from the standpoint of a gay Republican. When I arrived they discussed Peter Buttigieg and started talking about how they would be working a campaign against him. I went to bed and woke up to a fake Twitter @RealHunterKelly and an article that I in no way endorsed or wrote. I have since left and am working on a formal statement to give to everyone including the Buttigieg family.”

Needless to say, Kelly’s fake account and the smears match the actions detailed throughout the investor’s “confidential brief.” This didn’t stop partisan media outlets from circulating the unverified story. By Tuesday, the story was circled around outlets like Big League Politics, The Gateway Pundit, and Infowars — none of which actually contacted the accuser for a comment. Since the story was debunked, another source has since come forward and told The Daily Beast that Wohl and Burkman were behind the ACPI fake accusation scheme.

Wohl even denies his connection to the ACPI fundraiser, however, multiple sources show he is still inept as ever at hiding both his identity and intentions. The original investor who leaked the document confirmed it was Wohl who used his personal email account to make requests for a $25,000 investment from ACPI backers. Another conservative activist told the publication Wohl admitted to drafting a plan to manipulate political betting markets in the past. Reporter Ken Klippenstein was able to trace the phone number listed on the now-deleted ACPI Facebook page to texts informing journalists of Wohl and Burkman’s activities — which to be fair, is an upgrade from mummy dearest’s answering machine.

Wohl isn’t someone we can take at their word, given his continued history as the right’s worst fraudster. During his time as a student at Santiago High School in Corona, California, Wohl started his very own financial management group, the Wohl Capital Investment Group, which ultimately raised about $500,000 from investors around the country. By his own declaration, he called himself the “Wohl of Wall Street,” a tacky yet possibly apt (if only in spirit) reference to Jordan Belfort, the notorious “Wolf of Wall Street” who ran high-profile scams relating to securities fraud and money laundering.

In a report from Bloomberg, investor David Diedrich said Wohl told him his $75,000 investment had increased to more than $89,000, but when it came time to collect his earnings, Wohl sent him a check for just $44,000. This was soon investigated by the National Futures Association, who found promotional material from Wohl claiming he had over nine years trading experience (which the report notes would mean he either started working on wall street at 8 years old or is a bullshitter). The committee also ordered Wohl to pay $32,918 in restitution fees.

“ACPI plans to produce positive cash-flow by selling intelligence to friendly campaigns and by placing bets alongside our backers on the political outcomes that we influence,” the document continues. “With a superior handle on American cultural nuances, ACPI will be able to have a devastating impact on Democrat candidates… ACPI plans to execute sophisticated and impactful stunts as frequently as possible in order to influence political outcomes in the favour of our backers during the 2020 election cycle.”

Whether anyone actually believed the larger-than-life words of a professional liar remains to be seen. In April, Wohl finally confirmed the obvious fact that he ran Surefire Intelligence as a means to smear the special counsel. Mueller, in turn, has requested the FBI for an investigation into Wohl, as legal experts for Business Insider suggest he’d likely face charges for obstruction of justice, witness tampering, and false statements. It seems the leaker’s thoughts about Wohl turning into a “Jussie Smollett kind of deal” is true after all.