Civil discourse has officially reached the point where fact-checking memes is the new normal. About a month ago, right-wing circles began using the new NPC meme as another way of mocking authoritarian social justice warrior leftists as unthinking automatons within modern culture. Instead of politely disagreeing and refocusing on the bigger issues, these satirized activists are now forcing the hand of Silicon Valley tech giants to ban any traces of the meme for its “dehumanizing speech” against SJWs.

The term NPC is derived from the non-playable characters seen in video games, such as Skyrim and Fallout, where these individuals function only through the restrictive parameters of the designed game world, using their scripted dialogue and limited actions that are predetermined by the programmers. As written by ex-World of Warcraft developer Mark Kern, other NPC characteristics include: “Incapable of independent thought, wants everything done for them (Quests) and constantly needing coddling (escort quests).” In a political context, memers believe SJWs leftists are cliches with unoriginal talking points and predictable actions, building off the long-running Wojak meme to illustrate political homogeneity among the SJWs.

“The Left is just a meme of lunacy come to life,” one user for Reddit’s /r/The_Donald wrote, making references to the media reporting on President Donald Trump’s China tariffs. “They’re just NPCs in the game of life. Here we are with one of the best economies in U.S. history. Only brainwashed NPCs believe what ‘experts’ say when those claims are contradicted by reality!” 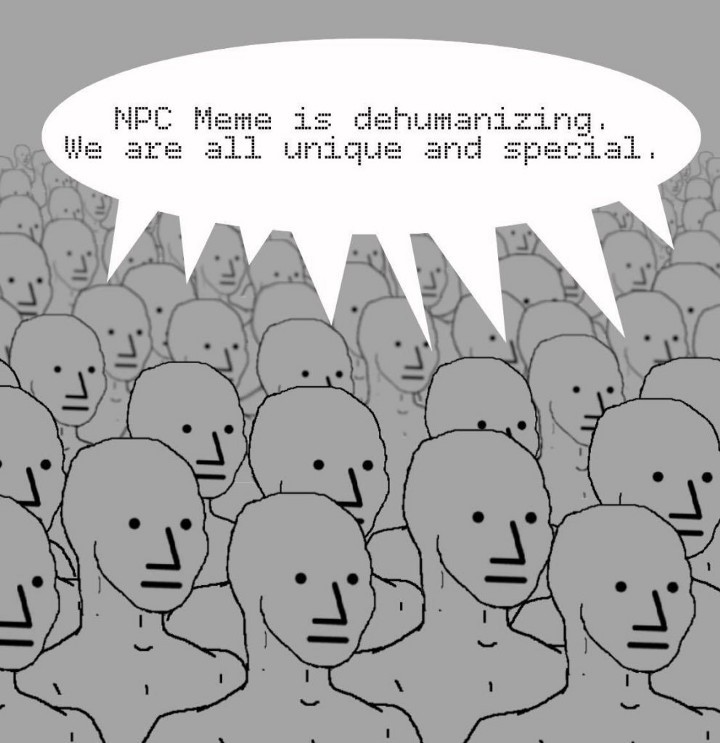 The SJW counter-response only vindicates this homogeny narrative. The mainstream attention began with an opinion article from Kotaku attempting to explain the meme to its audience, suggesting the NPC meme is a “far-right” and “dehumanizing” effort to sow “intellectual apathy” towards their ideas. Their case was that online memers were hoping to replace the SJW term with a new label to further brand their opponents non-human.

“NPCs have no agency; NPCs don’t think for themselves; NPCs don’t perceive, process, or understand; NPCs arrive at the same worldview not because it’s authentic to their experiences, but automatically. As a descriptor, it suggests that those to whom it applies aren’t even human, but are rather, functionally, robots, or clusters of computer code. That this has resonated as widely as it has is funny, but also a little scary.”

“It’s one thing to claim that a person’s strongly-held views are informed by nothing at all, but entirely another to imply that they’re completely on auto-pilot,” she continued. “That is dehumanization, a way of reconceiving your enemies as objects, pawns, strawmen, tools. At best, dismissing large swaths of people you disagree with this way betrays a lack of empathy for people whose experiences differ from yours.”

This blog post should have been the end of it. Instead of ignoring the memes like any normal person and leaving the mocking shitposters alone, their article spawned similar misreporting and pro-censorship rhetoric from not only similar far-left blogs (such as Right-Wing Watch and The Daily Dot) but even dominant corporate outlets like BBC and The New York Times.

“Evidence suggests that these are mostly attention-starved gamers looking to impress one another by ‘triggering the libs’ with edgy memes,” wrote NYT reporter Kevin Roose, “but not everyone gets the joke. State officials are already worried that voters will be fooled by deliberate social media campaigns that contain incorrect voting information. Similar types of disinformation spread on social media in 2016, which makes companies like Twitter nervous.”

The media, both independent and mainstream, are selling a narrative that online accounts were being made as an organized propaganda movement. They falsely claim these accounts were posing as actual liberal activists seeking to influence November’s mid-term elections, portraying the story as a failing on Twitter’s part to police their platform for any random user’s misinformative shitposts. Without any irony, this “dehumanizing” meme echoes the far-left’s rhetoric of non-SJWs being “Russian bots” and “fascists,” yet no banning response to these labels have been issued.

The NPC meme hit Silicon Valley so hard that they’re planning on banning it. pic.twitter.com/KVN6IWSfK0

By the end of the weekend, Twitter was forced to respond by suspending about 1,500 accounts associated with the NPC meme for violating a new rule against “intentionally misleading election-related content,” according to a company source from the Times. “Our hateful conduct policy is expanding to address dehumanizing language and how it can lead to real-world harm,” Twitter wrote in another tweeted statement.

One such banned user told the hard-right Breitbart News:

“I followed many NPC accounts (some followed me back). I retweeted some of them. I also answered someone’s (one of my followers) question about what the NPC meme is. Some people didn’t understand it right away. I can’t remember if I posted anything else that would be it. I’m pretty certain it was only because I followed and retweeted NPCs and probably ended up on a list or was mass reported by angry leftists who can’t handle what they see in the mirror.”

Alternatively, this selective enforcement could be an effort to suppress an effective meme and its propagators. Research from the University College London examined “multi-platform meme ecosystems” with “fringe and potentially dangerous communities” and how they spread their information through humor. Their rationale? “Considering the increasing relevance of digital information on world events,” they write, “our study provides a building block for future cultural anthropology work, as well as for building systems to protect against the dissemination of harmful ideologies.”

What the study found was of their examined 100,000 images across the internet, the most effective political memes come from only two right-wing spots, the subreddit r/the_donald and 4chan’s “politically incorrect” forum called /pol/, according to a report from Vice. With this in mind, should we really be surprised by these SJW censorship efforts when it seems to help their cause? After all, conservatives are still using the lines of “there are only two genders” and “facts don’t care about your feelings,” yet instead of the left issuing a solid, critical counter-response to these cliches, they’ve fallen into the trap of predictable censorship enforced by partisan big tech organizations while reusing the same justifications of “hate speech” and “dehumanization.”

If you want to appear like an individual, endowed with free thought and human will, this reaction to the NPC meme is probably the worst thing you could do. It only proves the memers right.

“The NPC meme is a response to something real, something that snarky liberals, and even leftists, increasingly fail to notice. In short, it is a tragicomic acknowledgment that things are not OK, that we are all NPCs (to one degree or another) because we are all in bondage.”

The full history of the NPC meme can be found on KnowYourMeme.com.