A long, long time ago, I wrote about cultural appropriation. I posited the idea that getting your pants in a wad over such an idea was ludicrous. Culture is an ever-shifting landscape. It constantly changes, thanks to countries interacting with each other. Go as far back as you can in history; you’ll find cultures clashing together. The resulting conflicts (or couplings) forever transform the peoples involved. That includes the stuff we call culture.

Only an idiot would deny this. It happens all the time, every day. In fact, cultural changes in society happen much more rapidly today, thanks to technology. We can learn about the culture, lifestyles, and interests of far-off lands, thanks to this little thing called the Internet. Do you really expect one culture not to rub off on another?

Then you need to see this:

Millennials in the West have been forever impacted by Asian culture. Mostly in the form of their entertainment. Thanks to television networks acquiring animated programs in the 90’s, an entire generation was exposed to Japanese culture. That has expanded to an enthusiastic interest in all things Far East.

But where do we draw the line? Should we draw one? Proponents of cultural appropriation (aka: race baiters) might say that enjoying a TV show is fine, but don’t you dare make it a part of your life!

Of course, this often takes the form of attacking white people for enjoying things from “other cultures.” Apparently wearing hoop earrings and certain kinds of hairstyles is akin to endorsing slavery. It’s yet another excuse for someone to vilify an entire race of people.

Isn’t there a word for that? I’ll let you figure that one out on your own.

Recently a young girl decided to make a statement at her prom. Instead of donning the usual revealing dresses teenagers wear these days, she went classy. She picked a cheongsam, a traditional Chinese dress. 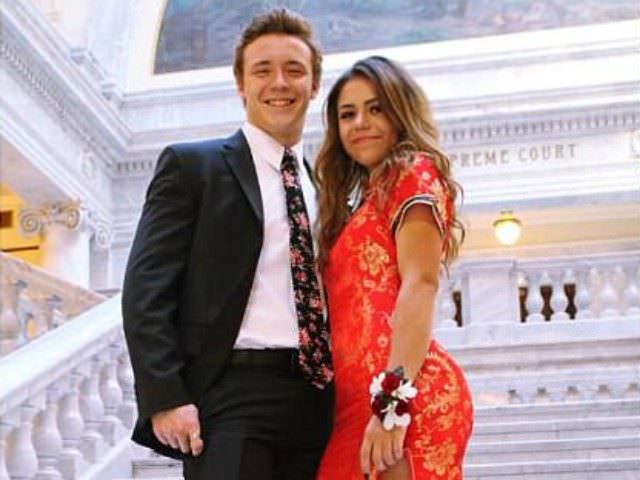 Keziah Daum showed off her dress with a few pictures on Twitter. This is obviously not the first time an American has wore this kind of garb. American actresses (at least in the past) have dressed in similar styles for events and to strut the red carpet. Once upon a time, they would have been applauded for showing off their love and respect for Chinese culture.

Not anymore. The deranged, soft-brained morons of the far left have decided that white girls can’t dress in Chinese clothing. I mean, most of their clothes are made in China or thereabouts, but they can’t wear clothes that LOOK CHINESE!

One unhinged piece of garbage decided to attack the girl online.

My culture is NOT your goddamn prom dress. https://t.co/vhkNOPevKD

Really, your culture Jeremy? I had no idea this one guy owned all of Chinese history, culture, fashion, and good taste! I guess we should all run our decisions by this Twitter jockey, just to make sure we don’t ruffle his gentle sensibilities.

In a series of subsequent tweets, Lam has congratulated himself on deciding to take a moral stand against this appalling assault on his culture by an ignorant gwailo. (Breitbart)

6. Whether or not people agree with me I will stand for what I believe, because I feel in my heart that it’s right. I won’t be boxed in with the confines of the model minority stereotype. If I feel disrespected, I will tell you. I will stay angry, I will stay resilient.

Stay resilient. Hey Jeremy, you’re not fighting some kind of injustice. You’re bitching because a pretty girl showed off her dress on Twitter. It’s more likely you’re upset that she is getting attention, more than her choice of dress. Like so many other miserable reprobates, you thought you had the right to rain on her parade.

What crime did Keziah commit? In the real world, she would have been cheered for celebrating another culture. When I grew up, we were encouraged to learn about foreign cultures. It had the potential to expand our horizons and help us appreciate other people and things.

But we’re not living in the real world, anymore. We are living in the Twilight Zone nightmare militant socialists invented on college campuses.

But here’s a newsflash: Keziah’s story actually reached China. Uh oh. I bet actual Chinese citizens were furious that an American was wearing one of their dresses. Not quite.

“Very elegant and beautiful! Really don’t understand the people who are against her, they are wrong!” one person commented on an article by Wenxue City News. “I suggest the Chinese government, state television or fashion company invite her to China to display her cheongsam!”

It is not cultural theft,” another wrote. “It is cultural appreciation and cultural respect.”

Weibo users added that Daum looked beautiful and criticised those who have accused her.

“Culture has no borders,” one wrote. “There is no problem, as long as there is no malice or deliberate maligning. Chinese cultural treasures are worth spreading all over the world.” (South China Morning Post)

Huh. The Chinese were fine with the dress. In fact, they complemented Keziah. So, who has the moral right in this made-up argument about culture, anyway? A privileged angry man on Twitter of Chinese descent or the billions of people who live in China?

This tells you something about this social justice warrior. He might consider himself a champion of his native land’s culture. But it looks like he’s assimilated to left-wing American politics pretty well. The culture of attacking someone because of race-based issues is very Western. It seems like Jeremy has no problem appropriating that for himself.