Cernovich And The Right-Wing Smear Campaign Against Hollywood/Comedians

THE GOLDEN RULE OF THE INTERNET: “Don’t. Feed. The Trolls.”

Mike Cernovich, the right-wing “journalist,” professional internet troll and lead conspiracy theorist behind “Pizzagate,” must feel on top of the world. Earlier this week, one man was able to force the hand of one of America’s largest mega-corporations, Disney, terminating the godfather behind their highly successful Guardians of the Galaxy franchise, James Gunn.

The controversy over Gunn began in the fallout of his defending liberal director Mark Duplass, who had recently committed the grave sin of endorsing conservative commentator Ben Shapiro as a “genuine person.” In his now-deleted tweet, Duplass advised followers to listen to The Daily Wire’s editor-in-chief should they be interested in “crossing the aisle” politically. 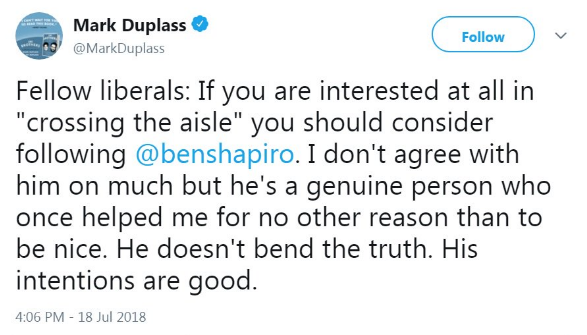 This sparked backlash between staunch left-wing critics of Shapiro and the partisan political right. Gunn, caught in middle of the situation, decided to both defend the right for Duplass to have this opinion, considering the man a personal friend and colleague, while slamming Shapiro and other pro-Trump figures over their obvious political disagreements:

Maybe you disagree with Mark Duplass, which is completely fair (personally I think even Ben Shapiro's mother should unfollow him). But that doesn't make Duplass' point-of-view evil. There are a lot of traitors & racists in the country today. Perhaps save the outrage for them. 1

This lead to a heated exchange between the two:

I appreciate the sentiment @jamesgunn, even if you're as wrong about following me as you were in your directorial decisions in "Guardians of the Galaxy Vol. 2" ;) https://t.co/eTK1QeI6nr

I’ve made many mistakes both on film & off, @benshapiro. As for the asshole thing, I really don’t know who you are other than the guy who once made fun of a high-schooler for using incorrect grammar in a tweet where you yourself used incorrect grammar. So, you know, asshole. https://t.co/vlxDawhwh8

What Gunn didn’t realize, however, is there’s a whole industry centered on ruining the lives and careers of those who have made mistakes. I’m speaking about the (right-wing) social justice warrior industry. When they’re not playing so-called free speech defenders, prominent conservative commentators, outlets, and trolls like Mark Dice, Jack Posobiec, The Daily Caller, and Cernovich, abandon their principles to enact smear campaigns – like the one to have Gunn fired from the studio for his anti-Trump comments.

In the interest of some new-found sense of justice, these activists decided to trudge through the man’s Twitter account, cherry-picking dozens of jokes from 2008 to 2009 and using them as evidence to smear Gunn as some kind of sadistic pro-rape pedophile, the likes of key #MeToo Hollywood predators.

What we unearthed tonight was a PROVEN pedo network operating in Hollywood.

We have archived Tweets, we saw them get deleted in real time.

We saw the clear connections and comments.

Expect the media to attack me to tomorrow in a way you have never seen.

“Friends, What we unearthed tonight was a proven pedo network operating in Hollywood,” Cernovich tweeted. “We have archived tweets, we saw them get deleted in real time. We saw the clear connections and comments. Expect the media to attack me to [sic] tomorrow in a way you have never seen. Godspeed.”

James Gunn didn’t make a few jokes. He openly discussed pedophilia. He is everything wrong with Hollywood.

I love tasteless jokes and gallows humor. That’s not what he did.

“James Gunn didn’t make a few jokes,” he continued. “He openly discussed pedophilia. He is everything wrong with Hollywood. I love tasteless jokes and gallows humor. That’s not what he did. No pedophiles allowed!”

This, of course, is a lie. The studio, however, doesn’t care.

“The offensive attitudes and statements discovered on James’ Twitter feed are indefensible and inconsistent with our studio’s values, and we have severed our business relationship with him,” Walt Disney Studios chairman Alan Horn said in a statement Friday. The Hollywood Reporter also said conservative activists were originally planning to confront Gunn over these jokes during an appearance he was scheduled to attend at San Diego Comic-Con. Gunn, apologizing in a sequence of tweets, pulled out after the non-scandal broke.

Disney, wanting to avoid any and all scandals, soon left Gunn without a job.

Cernovich, in effect, was able to mobilize an entire army of faux-outraged conservative trolls to have the name “James Gunn” rank among the nation’s highest trending topics on Twitter, soon having both the man’s life, career (and his Marvel passion project in his upcoming Guardians 3) placed in serious jeopardy. This is a huge studio franchise, garnering $773 million worldwide on the original film and over $863 million on its sequel, taken down by a few tweets and volatile rhetoric.

That, by all accounts, is a trolling-trophy of the highest caliber imaginable.

“I couldn’t sleep. I was up until 3 a.m.,” Cernovich told The Huffington Post and The Daily Beast earlier this week. “That’s a lot of real sick stuff… Disney took the right first step, but it’s time to do an open investigation into all of Hollywood,” he continued. “That this was conducted in the open is disturbing and leaves one to wonder what happens no one [sic] is around.”

Not everyone is buying Cernovich’s snake oil outrage, however.

“Why are these angry people threatening my wife and child?” Posobiec demanded in an email to The Daily Beast, addressing his experience of being “harassed” by critics. This harassment, however, seems to amount to some light Twitter trolling from the likes of Vic Berger, a satirical film director who often posts videos that frequently star Posobiec and Cernovich as the laughable cartoons they are. “He engaged in an increasingly hostile campaign of harassment, using electronic systems, of myself and my family,” Posobiec continued, “even posting a threat to my wedding on Twitter.”

Cernovich provided The Daily Beast with a copy of Posobiec’s handwritten statement claiming Berger instructed his 77,000 Twitter followers to crash Posobiec’s wedding — quite similarly to the Comic-Con plan. “I held a peace rally against political violence at the White House,” Posobiec continued in his email, citing the time he crashed a production of Shakespeare’s Julius Caesar when the assassination scene featured a Trump-like Caesar. “Their tactics will incite terrible consequences for our country if they continue down this road.”

Except these trolls don’t practice what they preach.

Instead, they want more trophies.

In the past, Posobiec has used his followers to go after critics such as Mackenzie Wolf, a Muslim American, divorced single mom and former Marine Corps corporal, who cited an NBC News story during her internship at Military Times. The article claimed Posobiec was stripped of his security clearance as a reserve Navy intelligence officer. What was her punishment? Tweets hoping Wolf might be strangled with her headscarf and having her daughter’s school and name publicly doxed.

Now, according to New York Magazine, Cernovich and Posobiec, notorious critics of the mainstream “fake news media,” have organized a conspiracy that Berger, the famous Tim & Eric video editor, “could be” the leader of some online pedophile ring known as “Berger’s Boys.” 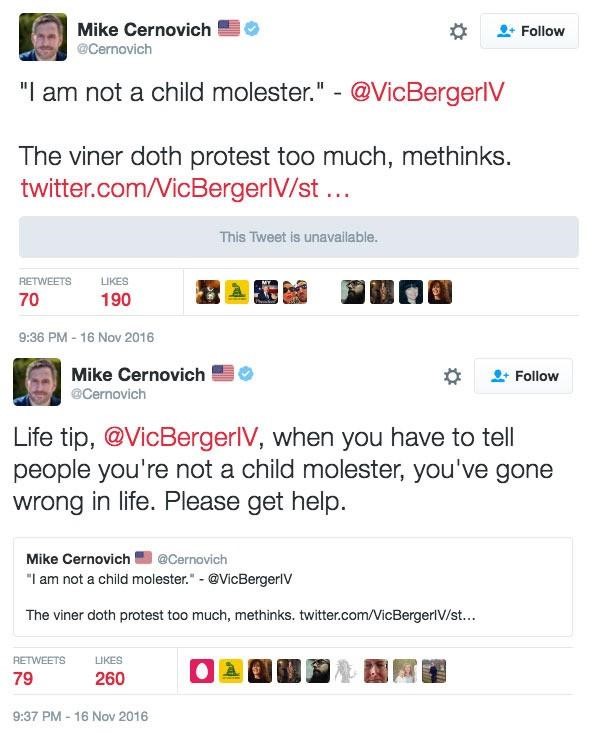 Disney, based on very little evidence, fired a man because someone known for falsely accusing his opposition of pedophilia made allegations of terrible sexual impropriety. In the world of Cernovich, there’s a predator behind every corner and jokes of darkness are proof you’re in on the secret plot. It was the exact same when Cernovich tried to have MSNBC contributor Sam Seder fired over a satire joke tweet at the expense of convicted rapist Roman Polanski, and it’s the same in comedians Gunn, Berger, Sarah Silverman, Patton Oswalt, Michael Ian Black and all cases where jokes are now being used as de facto evidence of horrific crimes.

This is beyond absurd. This is fake news. These are the joke police, and they’re not stopping anytime soon. These slanderous commentators destroy new media credibility and need to be held to account. Their conspiracies led to 2016’s December 4th shooting at Comet pizzeria, where a man searched for the Pizzagate dungeon this crew claimed was real. Until society demands better “journalists,” these lies will just continue. “That was 18 months ago,” Cernovich said. “I’ve been a relatively good boy since Pizzagate.”