Actress Melissa Fumero questioned why her “Brooklyn Nine-Nine” character was white in the Quebec remake of the show, HuffPost reports.

Fumero, who plays Amy Santiago on the hit show, shared the trailer for the French-Canadian remark “Escouade 99,” describing it as “like peeking through another dimension.”

“Gotta day [sic] though after watching this... I’m suddenly curious about the Latina population in Quebec. Just sayin,” she tweeted, seemingly referring to her character being renamed Fanny and played by white actress Mylène Mackay.

Another Latina character, Rosa Diaz, has also been renamed Rosalie and is now played by white actress Bianca Gervais.

Quebec is not Brooklyn:

Quebec, of course, is not Brooklyn. While the original show takes place in a city that is 36% Black and 20% Latino, Quebec is 87% white with Latin Americans making up just 1.5% of the population. 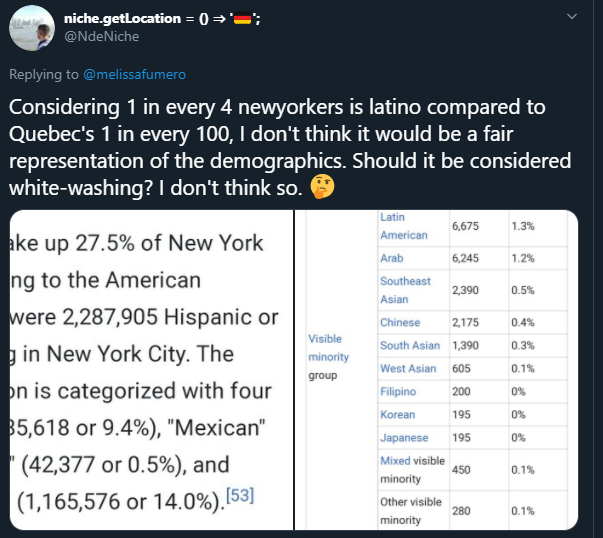 Fumero wrote that she understood that Quebec has a lower Latino population but doubled down on her insistence that the role should have gone to any person of color.

“I’ve been thinking about this a lot, and it basically comes down to this... while I understand the Latina population is v small in Quebec (& how many of them are funny actors?) the Amy n Rosa roles could’ve gone to ANY BIPOC so it’s disappointing to see that missed opportunity,” she tweeted.

“Lastly,” she added, “if the show is successful, I hope the creators take that opportunity to hire more BIPOC in supporting and guest roles.”

Furthermore, I love actors so I do not mean to shame these actresses, it’s not their fault... it’s up to the decision makers. Also, you guyssssss Amy is not sexy ON PURPOSE. So that bums me out too.