You Can't Say That Here! Or: Is Freedom Of Speech Dead?

The First Amendment of the Constitution is perhaps the single most important piece of law in the United States. Perhaps the most important of any nation, in any period of history (sure, you can argue the Magna Carta was pretty big too, but I digress).

I recommend you read through the entire Bill of Rights as a regular habit. My American readers would do good to know their rights; and our readers from around the world should understand why it is so important and whether or not they have similar protections.

Why is it important to know your rights? Because it's far too easy for them to be taken away from you.

I have great respect for our friends across the pond. Some might even say I'm a bit of an Anglophile (at least when it comes to British television). Yet I'm sad to say that the United Kingdom does not have the same kind of universal protection of speech as we have in America.

It seems that if you say anything that offends someone, you can get into trouble.

Endowed with nearly unlimited power, Parliament uses it to limit the political freedoms of the British people, with state restrictions on freedom becoming progressively more pronounced over the course of the last 20 years. (via Preston Byrne)

For example, Section 94 of Telecommunications Act, Home Secretary can issue executive orders “in the interests of national security” to do or refraining from doing anything, paired with a gag order, without judicial authorization. Meaning in the interest of "protecting" the populace, the British government can punish someone "if there is a reasonable suspicion someone would be offended by that true statement or verbatim quotation."

Not opinion, not jokes or libel, but a true statement. In England, you can effectively get in trouble for telling the truth.

Scary, I know. But I'm not here to harp on England. That is just an example of how seemingly free nations can easily pass laws that invalidate or outright outlaw the civil liberties of their people, in the interest of "national security."

Really it's about controlling the public. We are living in times that are skirting dangerously close to Orwell's 1984. It's amazing that a book written decades ago has come so close to the truth. In his novel, Orwell describes a completely Socialist country that controls every aspect of a person's life. Winston, the main character, is afraid of what he might say or even think because Big Brother watches even his facial expressions for signs of individuality or mistrust of the government.

Then there was the idea of Newspeak. In 1984, the society was aggressively inventing a new form of language, with agents eliminating "unnecessary" words. What for? It was a sophisticated campaign to not only control free expression, but to even alter the way people thought.

Because if you control the way people think, then they'll never be able to challenge you with their words.

A similar war is being waged in the United States, the land that is supposed to protect free expression, thought, and speech. They use the term "hate speech," but it can easily be substituted with "Newspeak." Just replace the term in this passage from 1984 with "hate speech:"

'Don't you see that the whole aim of Newspeak is to narrow the range of thought? In the end we shall make thoughtcrime literally impossible, because there will be no words in which to express it.

Social justice warriors and the regressive left want you to believe in such a thing as hate speech, which is just anything said they don't like. Their ultimate goal is for you to be afraid of what you say, as it might be branded as hateful to someone, somewhere. That would make you afraid to even think a certain way and then they've got you.

To limit free speech completely means to limit thought. Regressive liberals want you to believe there is such a thing as hate speech- words that can harm the same as actions- in order to control and silence their critics.

But a country built on personal liberties welcomes critics. It welcomes rivals. It welcomes dissenting thoughts so that one person or group cannot assume all the power. But that's what these Socialist (aka: social justice warriors) want: they want all the power over our society. Anyone that challenges them will be branded as hateful. They won't be allowed to speak.

The rest of us will be too afraid to even think differently than them, for fear of being punished.

That's why the left is so adamant about branding President Trump and Milo Yiannopoulos and other non-liberals as Nazi's. They don't care that the comparison is simply nonsense. They are hoping their stupid followers will just believe it at face value. Who would respect a Nazi, after all? And it's not wrong to silence, belittle, and attack a Nazi, right?

So the regressive left is effectively trying to silence anyone that disagrees with them by using slander and attacking the very cornerstone of our society: free speech.

It's right out of Big Brother's playbook.

Recently Scott Adams, creator of the comic Dilbert and frequent controversy starter, spoke about the continued efforts within our society to kill free speech. He even went on to say Freedom of Speech is Now Largely an Illusion. Shocking words, but he backs them up with this: 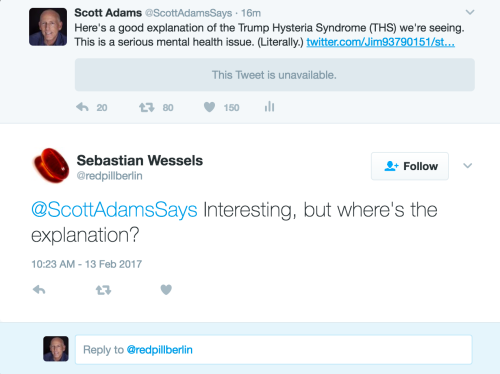 Notice the referenced tweet shows as “unavailable ” but it actually is available when users click the link. Twitter does this trick so my followers will think the link is gone and they won’t bother to click. This Twitter censorship method is well-documented by others. (via Scott Adams)

If you're a regular user of Twitter, I'm sure you've seen similar odd glitches. Tweets aren't showing up properly, users are flagged as deactivated when they're activated, and people aren't getting notifications of responses to their messages. People are claiming the social network of "shadow banning" them (that word keeps popping up lately, eh?), a secret form of restricting a user's reach and impact.

Sounds all very conspiratorial, right? Why would a company, built around free speech and expression, act so willfully to hamper free speech?

Haven't you been paying attention? Twitter is just another arm in the social justice war against free thought. They welcomed millions of users in with promises of fun, social engagement; freedom to speak your mind and connect with other people. Then, once they have your trust, they slowly erode your freedoms, until you don't even realize what you've lost.

As Preston said of the English:

As these restrictions have been implemented gradually and native-born Britons know nothing else, few in the UK have noticed how much the country has changed in a comparatively short time.

No one is about to take your freedoms away all at one. But if they can do so gradually, inventing things like "hate speech" to demonize legitimate critics or to subtly censor thought leaders on their popular platforms, then soon there won't be a place where free speech is truly protected or embraced.

We need to recognize this campaign against our fundamental way of life and fight against it. Regardless of your politics, beliefs, or personal views, you deserve to share them freely, without fear or suppression. We need to arm ourselves with knowledge; we must not become the sheep they hope we are. We must use the very freedoms they wish to destroy to strike back.