Why Do Liberals Worship Obama?

I remember 2008. I remember the swelling surge of hope and optimism that captivated a generation of people, when they witnessed for the first time a black man being elected president.

It was a pretty big deal. And although I’m a staunch conservative, I’m not so much of a troglodyte that I can’t recognize the historical significance of that moment.

At the time, it was obvious how much people—particularly young people—were enamored with Barack Obama. He was young. He was charismatic. He seemed intelligent, knowledgeable, and above all inspiring. Translation: he was the perfect politician for a new, modern Democratic Party. A new America.

It doesn’t take a rocket scientist to see why the liberal media and the entertainment industry loved Obama. Not only was he a liberal, but he had everything vapid, superficial, surface people loved. He said all the right things, had a winning smile, and even knew how to behave around the right people.

I mean, come on! He was so cool, it was painful!

But reality has a way of setting in. And while many people glamourized the man to Messiah-levels, the fact was Barry O’ was just another Democrat.

I know conservatives like to paint him as the devil. But if we looked at his decisions, it was clear he was simply a company man, someone whose goal was to push the liberal agenda while in office. Even if that agenda hurt Americans and damaged our country for years to come.

Yet today, liberals still consider Obama to have been a scandal-free, winning president. They refuse to acknowledge the shocking decisions he made that—by any standard—hurt the United States, its citizens, and its sovereignty.

My question is why? Why are liberals still so charmed by the man? Why do liberals tend to put their leaders on pedestals, to the point where they are worshiped as gods? Even when his time in office was coming to a close, there were people lamenting the fact—even Barry himself—as if he should stay president forever.

I have a theory, but we’ll get to that. First, let’s do a quick rundown on some of the bad things that came from the Obama administration.

First up: illegal immigration. I have a feeling that, outside the exploitative politicians on the left, few honest Americans want illegal immigration. Sure, those East/West coastal elitists will tell you it’s cruel to deny people illegal entry into our country. They will say it’s good to force women and children to hide in trunks and sneak over the border, through the aid of drug cartels. But they’re not the ones who suffer.

Under Barack Obama, we saw a massive spike in illegal immigration. This was thanks largely to policies he set into motion that protected illegals, even when they were caught by law enforcement.

It was so bad, back in 2015 then Senator Jeff Sessions released a lengthy document covering every time Obama violated the law in favor of illegals.

In a lengthy timeline released Monday, Sessions — the chairman of the Subcommittee on Immigration and the National Interest — lists every instance of the Obama administration ignoring, rewriting, delaying and breaking the nation’s immigration laws…

The timeline begins in January 2009 with the administration ending worksite enforcement actions and, 50 pages later, ends on February 13, 2015 with the House Judiciary Committee’s revelation that the administration included a “sneaky” avenue for illegal immigrants granted deferred status to be placed on a pathway to citizenship. (Breitbart)

The document can be read here. For those wondering, it goes far beyond “catch and release.” It details a concerted effort by Obama and his people to suppress efforts to crack down on illegal immigration, at almost every level, to help ensure illegals aren’t punished. That includes breaking laws, delaying the implementation of rules, and outright defying law enforcement.

This, by the way, is why Democrats were so terrified of Sessions becoming Attorney General. It had nothing to do with Russia and everything to do with the fact he defied their precious golden boy Barry.

I’m guessing the many black voters that supported Obama in ’08 and ’12 would be upset to find he was helping illegals take their jobs and drive down wages. African Americans, after all, suffer more from unemployment than everyone else (although, it’s improved significantly under Trump).

But I doubt many black Americans today realize that Obama was working against their best interests. They still think he was their hero.

I can go on, like listing how Obama violated nun’s religious rights, or the many ways he violated our Bill of Rights, the many real scandals under his presidency (that cost people their lives), and the still-imploding ship that is Obamacare. Not to mention his decisions in the Middle East leading to ISIS and the Syrian civil war. You know, little stuff.

But we only have to look at recent events to show that Obama is still confounding people with his behavior. After leaving office, he and his family went on a vacation. Because he worked so hard during his presidency, you know. That’s fine, most ex-POTUS’s do get some R&R. The thing is, Obama hasn’t stopped vacationing.

The Democratic base is growing increasingly frustrated with former President Barack Obama’s actions after leaving office, including a seemingly endless tour of millionaire and billionaire luxury retreats, according to Democrats and activists contacted by Fox News…

“These trips are like the lifestyles of the rich and famous,” said Democratic strategist Pat Caddell. The former adviser to ex-President Jimmy Carter believes that President Obama’s vacations are unprecedented, and a far cry from how Carter spent his first few months out of office. (Fox News)

At a time when the Democratic Party is falling apart, their last great leader is living the high life. Rome is burning, but Nero isn’t playing the fiddle, he’s out partying in Spain!

You cannot ignore the reality that the left is losing because of Obama’s time in office. Listen, you may be liberal, you may hold to the virtues of big government, social justice, and government-funded healthcare. But you must acknowledge that the movement that swept Donald Trump—a former TV reality star with zero political experience—into office, was the result of Americans fed up with Obama and the left.

It wasn’t Russia’s fault. It wasn’t entirely Hillary’s. It wasn’t just Trump’s effective campaign. It was discontent over all of Obama’s failed promises. And the bait and switch people felt when, once he entered office, Obama used the position to push social justice causes over Americans’ well-being.

I mean, his AG said the remedy to radical Islamic terror against gays was “love.” That’s not something people wanted to hear.

But still, despite the mountain of evidence to suggest Obama was a failure, there are still people who idolize the man. I mean, sure, he’s a good-looking guy, but really? There are liberals who refuse to acknowledge the bad choices of his administration. More than that, they gush over his every move, as if it is some kind of win for themselves.

I mean, what the hell is that!? Living his best life? Yes, thanks to stepping on the backs of the American people.

Why should anyone be happy about watching a millionaire enjoy a lavish vacation? This is not like watching a sick kid meet Spider-man. This is a rich man and his family—a man they don’t even know.

He enjoyed privilege and wealth before he became president. And after running the country for eight years, will continue to enjoy an opulent lifestyle. Thanks largely to the vapid celebrities that will invite him to resorts free of charge.

But his legion of fans can’t enjoy those luxuries. They were the ones taxed into oblivion to not only fund his failing Obamacare, but the many bloated programs he pushed, not to mention the vacations he went on during his presidency.

There’s almost this vicarious association they have with the man. If he is doing okay, they’re doing okay. If he’s doing great, so are they!

It could stem from the shared comradery that African Americans feel for one another. Over generations of struggles and victories, there is this idea that when one of them succeeds, they all succeed. But if one of them fails, they all fail. A noble notion, to be sure. But it doesn’t apply in this situation.

That kind of idea can also be used against black people if, perhaps, it was abused to manipulate them into voting for someone who didn’t have their best interests at heart.

You can argue that was the motivation for many Americans voting for Obama. I don’t know for sure; I refuse to make such a generalized claim. But I will say the ongoing fandom surrounding the man stems from this, at least for many Americans.

It’s this toxic, incestuous idolizing that makes Socialism possible. It’s a fleecing that tricks people into giving a select few unrestrained power in our government, because the people think it means they will benefit. That is never the case. The only way the people can flourish is when the government is small, and the rights of the people are protected above all else. Then there will be freedom for each of us to thrive, if we so choose.

Perhaps it’s because the left more often are atheists, or at least secular humanists, that they worship Obama and his ilk. Humans need to worship, after all. If there’s one thing we’ve learned from human history, we like our gods. And if we don’t believe in an all-powerful being watching over us from heaven, we’ll find someone else. 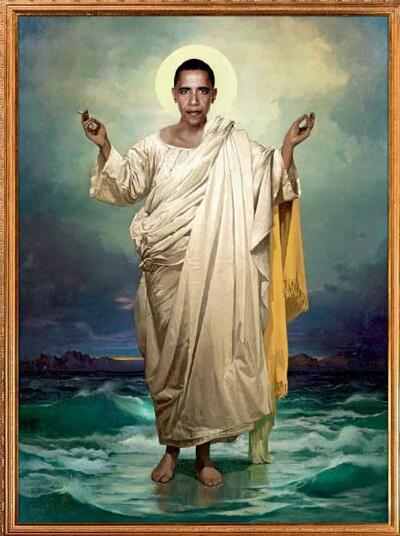 We have to come to grips with the fact that our “heroes” are nothing of the sort. Obama may have been charismatic, smart, and likable, but he was a politician with an agenda. No one, no matter how charming, is above the people’s scrutiny and accountability. Imagine what would have happened if the media were as exacting with Obama as they are today with Trump? He would have never been able to do anything during his time in office.

He probably would never have had a second term.

And I’m sure some of you are screaming at your screens about how people are idolizing Trump, right now! I maintain that the fervor over Trump is nothing compared to the hysteria that comes from the left.

Considering the massive campaign of hate directed at Trump and his supporters by the media and liberals, it’s hardly the same. And while there are some who probably worship Trump, conservatives prize our values, traditions, and convictions over a personality. We’d rather have leaders who protect our freedoms, over winning smiles and empty promises.

Can the left say the same? Of course not.

Here’s how delusional the left is over their people worship. During Obama’s campaign in 2008, many were comparing him to John F. Kennedy. There was even an SNL skit where the spirit of JFK christened Obama as his successor.

But they are clearly forgetting history, or rewriting it. By today’s standards, JFK’s politics would be downright conservative.

Don’t believe me? I’ve got another video:

Yet liberals remember JFK as one of the best Democrats in history.

Perhaps I’m right in saying they value personality over principles.