Violence That Dares Not Speak Its Name

I've talked a lot about how I believe liberals are hypocrites. You'll have to forgive me for such a gross generalization. But from what I've seen from the most vocal segments of the left only confirms my prejudice.

We hear about liberals protesting things like the Keystone XL pipeline, claiming it is an environmental threat, potentially harming wildlife. They talk about the dolphins and polar bears who are endangered by "global warming." Many of these people will dump red paint on someone wearing an expensive fur coat.

They'll even hit you with a guilt trip for eating a cheeseburger.

But these are the same people who by the millions marched on D.C. to defend the right to kill an unborn human child. I make no apologies for calling abortion murder, because it is.

There are liberals who will defend the lives of birds, bears, and cows, but are proud that they can freely extinguish the life of a human being.

That's hypocrisy to me.

Then there's the more localized hypocrisy, such as when Hillary Clinton suggested Donald Trump was a "puppet" for Russia, based on nothing more than her own assertions that the Podesta email leaks came from them. No evidence. Nothing to connect Trump to Putin in all his years doing business around the world.

Yet we have documented proof that Secretary of State Clinton took cash from Saudi Arabia- to the tune of at least $50 million- and later provided arms deals for the country.

So who’s the puppet?

Then there was this glorious moment for liberals: 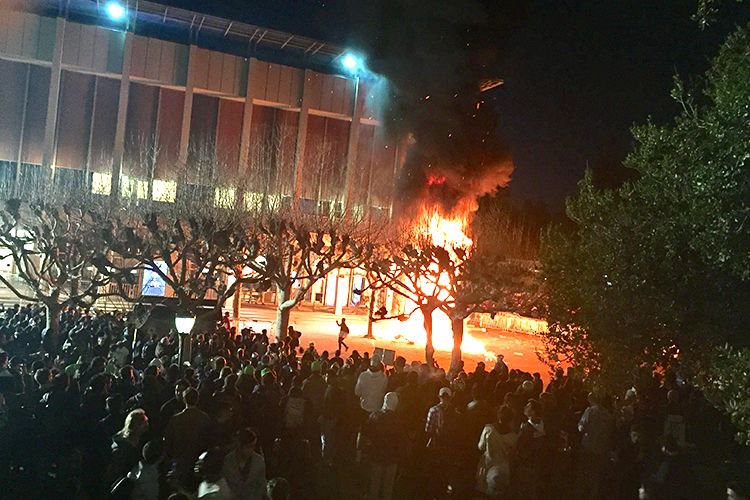 Liberal students (buoyed by professors, anarchists, and terrorist group Antifa) burned U.C. Berkeley because Milo Yiannopoulos was going to speak on campus. They were so threatened by a conservative, gay tech writer, that they rioted through the night, causing significant damage to the school and surrounding area.

Many have pointed to the irony that the center of the Free Speech Movement of the 1960's is now so hostile to free speech that they beat people with whom they don't agree.

That's a shocking level of hypocrisy.

It's nothing new. The modern left- perhaps only the more radical wing of young liberals- are resorting more and more to violence. They were never taught to respect other people and their right to their opinion; perhaps all those "safe spaces" taught them the wrong lesson. 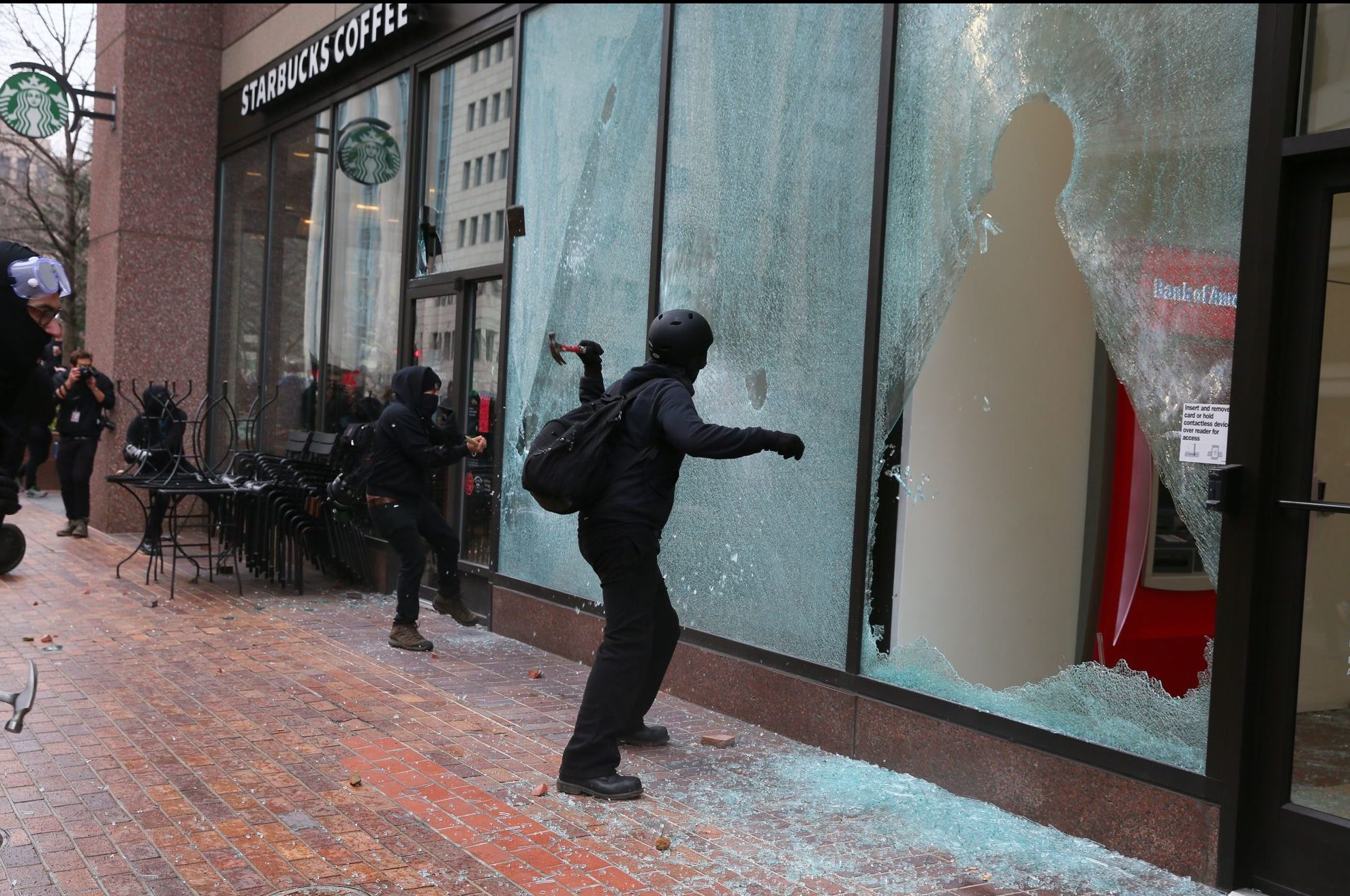 It seems that on campuses throughout the country- and backed by radical activists groups like Antifa and BLM- liberals feel empowered to deprive anyone of their rights, simply if you disagree with them. It is a kind of fascist bully tactic. Hey, they're the ones behaving fascist! Another example of hypocrisy.

Don't think for one minute that these outbursts of violence are sporadic, random occurrences. These left-wing radicals are planning these events, as evidenced at a recent campus.

“In response to the record number of hate crimes against Latinos [sic], Immigrants, Muslims, Women, the LGBTQIA+ community, Jews, African Americans and other minorities since the rise of Donald Trump and other Alt-Right Neo-Nazis, Knights for Socialism has decided to host a series of self-defense clinics for anyone that wants to learn how to BASH THE FASH.” (via Milo)

Of course if pressed for examples of all these hate crimes, these wilting snowflakes would have nothing to show you. They'd instead scream in your face, pull your hair, and stomp on you while you were on the ground.

This hostility towards anyone that's not a liberal seems to be spreading like cancer throughout predominately liberal centers. I wouldn't want to drive through Austin with a "Make American Great Again" bumper sticker. There are parts of New York I'd advise you should avoid if you like to wear that Trump t-shirt.

Then there's San Francisco, perhaps the most corrupt hive of liberal scum and villainy. There must be a correlation between a high number of liberals and terrible rent spikes, as San Francisco is the most expensive place to live in the United States (so much for fair housing, huh guys?).

But the hatred towards Red folks is so great in the Bay Area; conservatives are forced to meet in secret.

Some East Bay conservatives say they live a secret life. They can never tell anyone what they really feel like in fear of their safety.

“If you witness what happened in Berkeley, actually they are so violent on top of it. I mean being a conservative in the Bay Area is like being a heretic,” says Ward. “You lead a double life. You can never tell your friends and co-workers.”

Robert says several Bay Area conservatives have secret meet ups like the one KPIX 5 was invited to visit in the East Bay. (via CBS Local)

I'm sorry, but I need a little clarification. San Francisco is in AMERICA, right? We didn't fall through some kind of Twilight Zone wormhole and are in Nazi Germany, Soviet Russia, or Ancient Rome? Because I thought in America people are free to speak their mind openly without fear of persecution.

I guarantee if a liberal lived anywhere in America, they'd feel fine sharing their opinion. Even in largely conservative areas, they'd be safe and respected.

In heavily liberal regions, American citizens can't even express their views. Not just because they'd fear the reprisal of their friends and coworkers, but they'd fear actual violence.

This, my friends, is a pathetic joke. Once and a while you'll hear a conservative pundit call certain parts of the country "real America," implying that there are parts that simply aren't. After reading and seeing what's going on across the country, I'd have to agree.

If you live anywhere and felt afraid to express your views for fear of violence, THAT'S NOT AMERICA.

If standing up for conservative views, even the President, brings violence and bloodshed, that's not America.

But what causes this kind of violence? What is bringing on these bouts of un-America retribution?

A big part of it is the mainstream media. They so consistently distort facts, hoping to bamboozle viewers into thinking the liberal point of view is the right view. That you'd be foolish to think otherwise.

Yet they know large portions of the country refuse to accept this. So they aim at marginalizing conservatives and non-liberals, hoping to turn the rest of the country against them.

Yes, they want you to think conservatives are pickup truck driving, gun loving, beer swilling rednecks who don't like minorities and marry their cousins. People like that surely shouldn't be listened to. Their opinions don't count. Hey, we should even put them in their place, with a little bit of violence.

Bigger conservatives, like Donald Trump, well they're as fascist and hateful as Adolf Hitler. And who would give a Nazi a fair shake right? A Nazi doesn't deserve freedom of speech. Hell, they don't deserve to live!

The end result is what we're seeing in San Francisco: American citizens afraid to speak up and stand out. And when we allow violence to stop us from speaking, it stops us from making a difference. It stops us from getting our issues from being heard.

The left is effectively a Gestapo working to oppress conservative thought and dialogue. They'll use any means necessary to silence us.

The question is, are you going to let them?