Vegans: Keep Your Opinions To Yourselves

I’ll preface the following diatribe by first saying I have nothing against people who make a personal choice not to eat animal products. There are a litany of reasons why someone would stick to an all-vegetable-based diet.

Some people do so for health reasons. Either they cannot process animal products or they have found avoiding them can lead to weight loss and other desired successes. Some do so out of religious concerns. Their faith and personal convictions dictate what they eat, and that is admirable. And others have a deeply-rooted sense of morality that convinces them that eating animals is wrong.

All of these are good reasons to make a personal choice not to eat food that contains animals products. I can get with that. Because you have the freedom to decide what’s right for you and your family.

Yet the ongoing joke is that vegans can’t keep this crap to themselves. Like door-to-door Jehovah’s Witnesses, they feel compelled to proselytize the entire world. They feel it’s a mortal sin to consume animal products and the rest of the world must conform to their beliefs.

That’s why I have a problem.

You see, it’s incredibly unrealistic to demand the entire world stop eating (or using in any way) animal products. There are parts of the world where food is very scarce. Using animals for food, clothing, and other needs isn’t just convenient, it’s a matter of life or death. The thought that most of the world could actually transition to a “cruelty-free” form of living that doesn’t require the use of animals is nonsense.

Veganism is by and large a first world luxury, like organic eating or driving electric cars. It’s nice. It makes you feel better about yourself. But it is largely impractical throughout the world.

But that doesn’t stop 99% of the vegan evangelists from carrying themselves with a holier-than-thou attitude around us monsters who get our protein from affordable, healthy, and sustainable sources like eggs, dairy, and fish.

The vegan lifestyle isn’t about healthy living or pursuing a cruelty-free world; it is yet another attempt by left-wing activists to control how we live. Much like environmental activists, vegans push to indoctrinate us a certain way, in the hopes of limiting and controlling the way we think and how we act.

It’s not enough to just educate people on the benefits of eating vegan, and hoping that a few will turn. Vegans throughout the media try to bully and intimidate us into adopting this narrow, constricting, and ultimately unhealthy way of life.

As evidenced by perhaps the most evil group in modern times: PETA.

In an article called, “Why Cheese Is the Most Sexist Thing You Can Eat,” the extremist group PETA claims cheese is the product of rape.

“As feminists, we’re working to put more women in office and in corner offices. We fight for equal pay, tax-free feminine hygiene products, an end to sexual harassment, funding for women’s sports, and streets safe enough for us to walk alone. We push for strong role models who don’t objectify women on television and in movies. We work to end sex trafficking, slavery, genital mutilation, and “honor killings.” We rail against sexism in all its many forms—except, perhaps, when it comes to what’s on our plates.” (Milo)

(Putting aside the lie that PETA has anything to do with ending sex trafficking, slavery, or FGM, we can move on).

Woah, wait a minute. I thought PETA was about helping animals. Yet here we see their true colors as jack-booted feminist soldiers, intent on spreading an entirely different goal. It’s not about making sure animals aren’t mistreated. It’s about pushing feminism, which is an inherently political and social platform.

When did stopping minks getting electrocuted in the butt turn into another liberal, social justice cause? And how does “working to put more women in office” have anything to do with eating cheese?

I know I’ve been accused of some wild things in the past, but this is beyond insanity.

PETA claims that cheese is a product of “imprisonment, rape, reproductive control, kidnapping, and abuse.” Damn. Are you talking about cows!? The slow, dull-witted creatures that wouldn’t be on the planet today if it weren’t for human farming?

Since when is raising cows to produce milk imprisonment? And how is artificially inseminating a cow so it can produce calves considered rape? Can anyone in their right mind swallow this tripe?

Yet now, thanks to a loaded article from PETA, cheese can be considered rape.

I really must stress to you how stupid their logic is. But what can I say? This is a group that tried to dupe people into thinking sheep were bloodied up when sheared for wool.

This is also a group that is so cruel to the animals in their care, that it forced the state of Virginia to pass stricter animal control laws.

In a remarkable turn of events, Virginia legislators reportedly have had to step in to protect animals from PETA, which runs a gulag-style animal shelter at its headquarters on the banks of the St. Elizabeth River that euthanized over 80 percent of the animals in its care in 2014. (Breitbart)

The law passed the House 95-2, their Senate 33-5. An overwhelming vote, because the death rate at the PETA shelter was over 3x the normal rate for other shelters. What was the rate of putting down animals for most? Less than 25%.

How can a group that is committed to the ethical treatment of animals (it’s in their friggin' name), end up killing 80% of the animals in their care? One commenter on the Breitbart article said they tried to adopt a dog from a PETA-run shelter. After filling out a copious amount of paperwork and being grilled in an interview, they were denied- even though they had successfully raised three dogs in the past.

Does PETA even care about animals? Does anything they do even help improve the quality of life for animals? If you look at the bare facts, clearly no. They kill way more animals than they help save.

Their rhetoric over cheese is complete nonsense, clearly a poorly-veiled rant over sexism.

The answer is no.

Okay, I’m being hard on PETA—rightfully so. But they don’t make up all of vegans. The reality is, you don’t have to look far to find a vegan group embarrassing themselves. Even in the weird ol’ land of England, they complain about everything. Including the money.

The Bank of England has announced it will continue to use plastic banknotes containing traces of animal fat, in a move that is likely to outrage animal rights activists.

A row broke out in November when the central bank admitted that its new five pound notes contain tallow with more than 137,000 people signing a petition demanding it “cease to use animal products in the production of currency that we have to use.” (Breitbart)

Tallow is a product from animal fat that’s been used by humans since before the Dark Ages. It may seem odd that they are putting into the money, but it’s a common ingredient in many things. The bank considered using palm oil but said that “raises questions about environmental sustainability.”

It actually makes me laugh. Use tallow, the vegans flip out. But if you use palm oil, the environmentalist would most likely flip out.

The groups complaining about the tallow in their money include vegetarian Tory MP Henry Smith. He whined on social media that using this basic staple was “animal slaughter.” And they say pro-lifers are over dramatic.

But it’s not just limp-wristed liberal politicians complaining. The National Council of Hindu Temples has complained. Because of their convictions not to eat animals they believe were once people, that means they can’t use five-pound notes, and they require the entire nation bend to their will.

It gets even more hilarious. Someone has mounted a Change.org campaign and promised to bring the issue to the European Court of Human Rights. Because they don’t have anything better to do than to deal with England using fat in their cash. It’s not as if real crimes are being committed around the world that the ECHR should be focusing on. Nope, we should spend valuable resources on tallow in the money.

This is even more laughable when you consider that most people don’t even use cash in their day-to-day lives. Hey vegans, just use your debit cards. Avoid the problem entirely!

It’s this impractical, arrogant, self-righteousness that vegan activists carry themselves with that makes them so pathetic. They rant and rave over the rights of a chicken or pig. Yet they seem to be blind to true injustices that take place around the world. Real human rights violations are going on in China, North Korea, Iran, and Venezuela. Real problems that cost people their lives because governments deny them basic freedoms like speech and religion.

But no, the fat in the cash is the real problem.

I can go on, discussing the many odd and erratic choices and comments made by vegan advocates. But that’s like shooting fish in a barrel. Maybe I’m being too hard on vegans. Maybe it’s cruel to call them out on their stupidity.

After all, in the end, veganism is very unhealthy for humans. Vegan diets offer a shocking lack of DHA/EPA, fatty acids that are necessary for the brain to function properly.

This one is quite simple: EPA and DHA are found almost exclusively in animal foods. Seafood and marine oils are the primary source, but pasture-raised meat and dairy products (and, to a lesser extent, conventionally raised meat and dairy) also contain modest amounts. The only significant source of preformed DHA in plant foods is microalgae (which is why most vegan DHA supplements are made from it). (Chris Kresser)

You can supplement with your algae pills (and please do), but evidence suggests that for many vegans, that just isn’t enough. Without all that good fat coming from fish and other animals, your development, health, and brains just aren’t functioning as well as us monsters who eat meat. 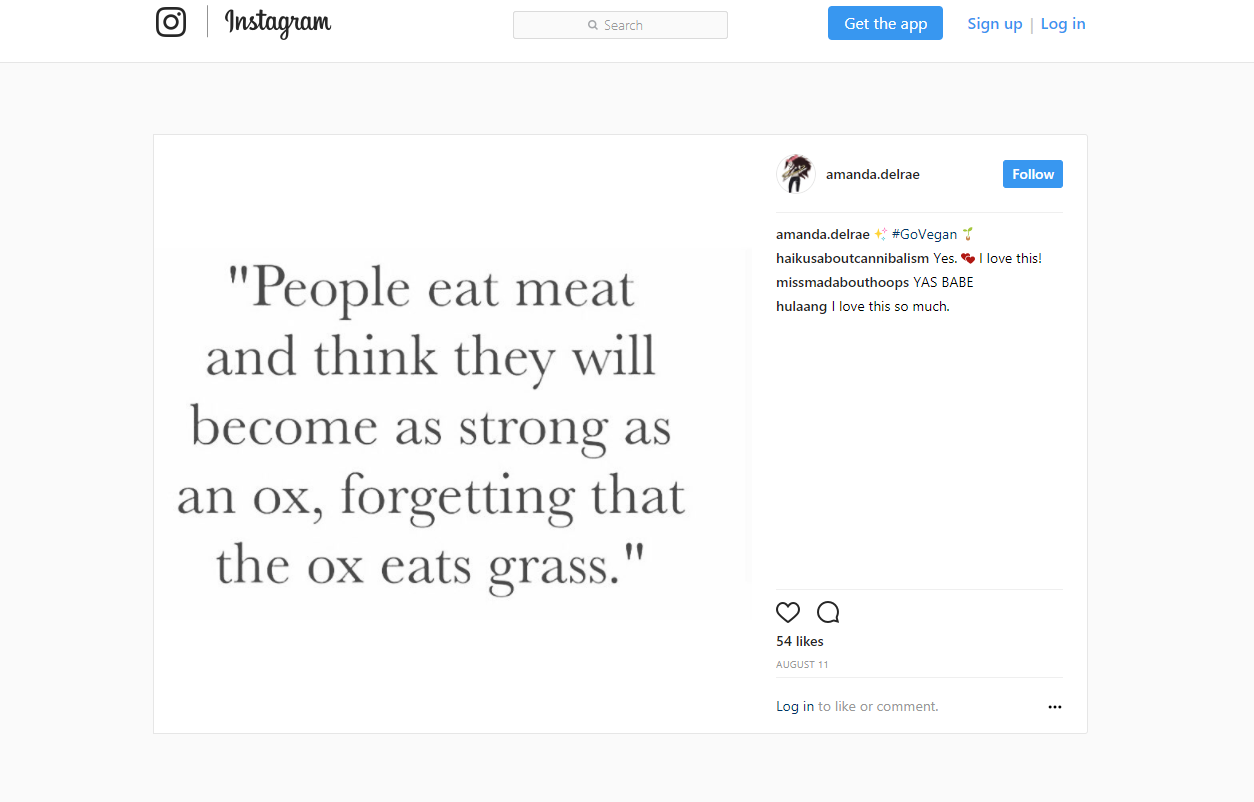 But the next time I see something like this online:

I’m coming after you.