Yes, it’s important for social media companies to be held to ethical standards. Yes, it’s worthwhile to consider where social media gatekeepers stand on the political spectrum, and how far they are willing to go to promote their ideologies, and suppress their opponents. But when it comes to the latest controversy surrounding Facebook’s news feed, an obvious question comes to mind.

Who still gets their news from Facebook, and what does that say about their desire to be truly informed?

Those who are willing to be misled, fed half-stories, or guided to articles pushing narratives that fit what we know is Facebook and the majority of the tech industry’s left-leaning ideology are the only ones who rely on the social network for their news. Even if you happen to share the same ideology as Mark Zuckerberg, Sergey Brin, and the majority of Silicon Valley, is Facebook really going to offer the array of in-depth resources that you need to form sound, impregnable arguments?

Of course not. The point is not that we shouldn’t pay attention to how Facebook manipulates its

‘news feeds’ and the users who rely on them to be ‘informed.' The point is that we know Facebook is not the unbiased source of news it claims to be, and is not the internet gatekeeper whose news-related decisions are most critical to the truth-hungry public. Stories related to the news-sorting algorithms of Google and YouTube, mediums where users tend to search for specific topics and stories, are far more important. Presenting disinformation or biased information to users actively seeking the truth, it seems, is more consequential than what Facebook chooses to put, or not to put, in its primary news feed, which people tend to merely stumble upon when checking their notifications.

That said, it’s important to know exactly where Zuckerberg and his company stands, and what actions they’re taking with respect to the dissemination of information. Before getting into the latest controversy, here’s a brief history of why an individual can’t blame anyone but themselves for feeling misled by Facebook in October of 2017.

Facebook has become the consummate example, along with other tech giants like Google and YouTube, of the saying, ‘if the product is free, then you’re the product.' Zuckerberg tends to get more attention than other tech leaders, and therefore has come under heavy fire for numerous instances of ethical breaches. Yet, each time, Zuckerberg has called any perception of wrongdoing ‘fiction.’

Actually, allegations that Facebook manipulated its user base, including individuals under the age of 18, to study the nature of emotional contagiousness has since been confirmed as nonfiction. According to Forbes Tech, ‘Facebook data scientist Adam Kramer ran an experiment on 689,003 Facebook users two and a half years ago to find out whether emotions were contagious on the social network. It lasted for a week in January 2012…Facebook curated the content of their News Feeds to highlight the good, happy stuff (for the lucky group) vs. the negative, depressing stuff (for the unlucky and hopefully-not-clinically-depressed group).’ Facebook eventually fessed up and apologized, quite sincerely I’m sure. So all is forgotten, right?

Nah, strike one for Facebook as a reliable source of news.

Anybody who was aware of this story would have written off Zuckerberg and the social network as a place to attain information with any news-tilt immediately. Fool me once…

The next major sign that the Facebook News Feed was not only subject to emotional manipulation, but ideological manipulation, came in the months leading up to the 2016 American presidential election. Forbes cites a report claiming Facebook “news curators” were actively suppressing topics and issues considered to be conservative on their Trending Topics news feed. At the time, Zuckerberg through official statements ‘vigorously denied the claims.' I’m sure, at some point, he even called them fiction. He even posted on his own Facebook account claiming that, essentially, Facebook couldn’t make either party happy. It was not technically a denial of anti-conservative bias, but in Zuckerberg’s unique jargon, it was just that. 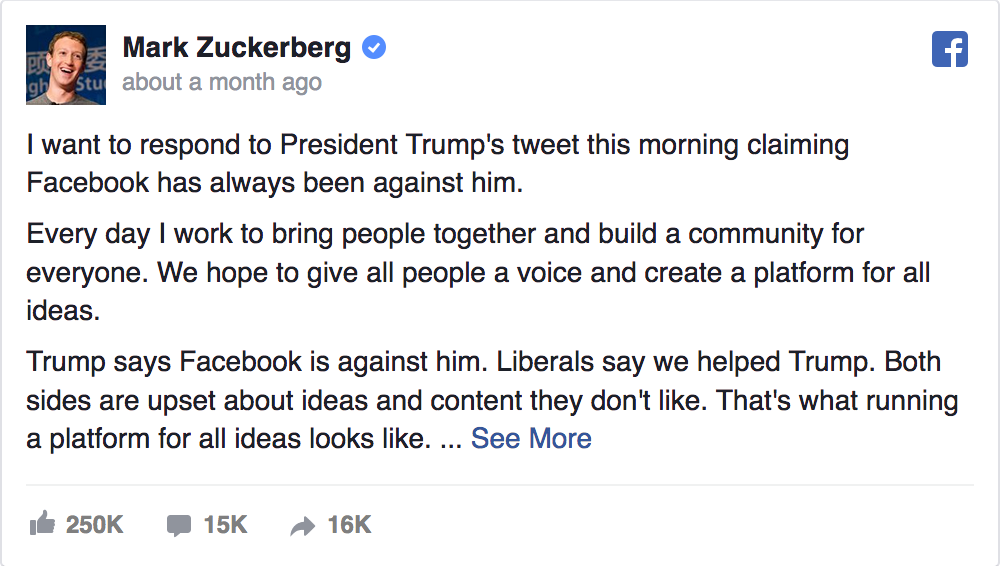 Zuckerberg is a smart guy. He knows how to speak in platitudes and legally-vague ways that hide the truth. Specifically, that Facebook suppresses certain news topics and news sources, in favor of others. And despite both a formal, Facebook-issued denial of news suppression and a more vague denial by Zuck himself, for a second time, the allegations were proven to be non-fictional. According to the Washington Post, ‘several former curators’ corroborated the claims, and expounded on the methods.

‘Gizmodo quotes several former curators suggesting that conservative news stories would be booted from the automatically generated list of trending stories for two reasons. One was if the story came from a conservative-leaning site, such as Breitbart.com or Newsmax.com, in which case curators were told to find the same story on a mainstream media site, if possible.

The other was if the curator didn't want to include the story or didn't recognize the story as important. It's hard to know the extent to which the latter judgments took place, but one of the former curators — a conservative — told Gizmodo, "I believe it had a chilling effect on conservative news."’

Again, Facebook is clearly not the place to get reliable, bias-free news. Very few news sources are without their bias, slants, and niche audiences catered to. The problem is that Facebook claims to be a news site for all, completely bias-free. But after two major scandals pertaining to how they manipulate not only their story choices but the readers themselves, there’s no excuse to be surprised by further scandal related to Facebook’s news feed.

Still, it is important to speak up for the little guy, those trying to report truthfully and unabashedly amidst a swamp of disinformation. And shedding more light on Facebook’s most recent news-related ethical breach is kind of titillating. So here it is…

A report from the Guardian found that Facebook is testing the creation of a secondary news feed, one that users would have to seek out. If you know the nature of Facebook, its users, and the algorithms intended to steer them toward where Facebook wants them to be, you probably understand at least the significance of creating a secondary, less visible news feed.

Here are some of the details, per the Guardian:

‘A new system being trialed in six countries including Slovakia, Serbia and Sri Lanka sees almost all non-promoted posts shifted over to a secondary feed, leaving the main feed focused entirely on original content from friends, and advertisers.

The change has seen users’ engagement with Facebook pages drop precipitously, with publications reporting a 60% to 80% fall. If replicated more broadly, such a change would destroy many smaller publishers, as well as larger ones with an outsized reliance on social media referrals for visitors.’

Can you guess which sort of pages will be ‘non-promoted’ pages? History tells us it isn’t going to be the New York Times. But this isn’t only about politics. Like the disingenuous motives given by YouTube for de-monetizing the videos of some of its biggest stars, primarily conservative but across all ideologies, this move has another end. And that is to suppress the means by which up-and-coming media outlets can gain readers and viewers, further consolidating the power of increasingly desperate and non-credible mainstream outlets.

Naturally, Facebook’s stated rationale for the ‘experiment’ is completely innocent.

Because we couldn’t check up on our friends and families easily enough, we need them flooding our news feeds…

It’s notable that those who can pay to promote their stories and content will remain in the primary news feed, where they are far more likely to reach a larger audience. Those who have the money to pay to promote their content regularly are the ones who already have the power and resources to retain their now-dubious title as ‘mainstream media.'

‘New media’ companies, even ones with a left-leaning tilt, will apparently be most harmed by this move. But it is hard to believe that sites listed in the Guardian report as susceptible to this move – Huffington Post, Buzzfeed, and Business Insider – will be the real victims. These sites are consistently popping up on the first page of a Google search. They will survive, and likely remain even relatively unaffected, needing only to pivot their resources slightly away from social media promotion to do so. It’s the true little guys, those who have not yet established the cache of the Buzzfeeds and Business Insiders, that will take the biggest hits. And, apparently, this is Facebook’s M.O.

‘Matti Littunen, a senior research analyst at Enders Analysis, said the move was “the classic Facebook playbook: first give lots of organic reach to one content type, then they have to pay for reach, then they can only get through to anyone by paying.”’

It seems a sort of bait-and-switch, and there are surely far greater motives at play than ‘serving the users’ desires,' as Zuckerberg would lead you to believe. Those motives are probably a combination of politics, media consolidation, and under-the-table loyalties. Regardless of the motives, this is strike three. Don’t get fooled again. Find real news sites, stick to them, and use Facebook only for what it was originally intended.