US President Donald Trump’s administration is moving to control and curb the information coming from several government agencies this week. Employees at the Environmental Protection Agency, the Interior Department, the Department of Agriculture and the Department of Health and Human Services (HHS) have revealed that they received directives from the new government limiting how they communicate with the public.

All these agencies are involved in environmental issues, reinforcing concerns that scientific research and facts are being sidelined. Trump, who has blamed China for “the global warming hoax,” is a climate change denier and appears to be setting the foundation for environmentally-damaging policies. It seems inevitable, considering Trump’s cabinet features not only multiple billionaires, but the highest number of climate change deniers in history.

On Tuesday, a source told Reuters that the staff had been told by members of the Trump administration not to speak to reporters or publish any press releases or social media updates. They have also been asked not to publicize any talks, conferences, or webinars that had planned for the next 60 days. As of noon on Wednesday, two agency employees revealed that the Trump administration had instructed the EPA to remove climate change pages from its website. These contained links to scientific global warming research, as well as detailed data on greenhouse gas emissions.

“If the website goes dark, years of work we have done on climate change will disappear,” one staffer told Reuters. Other employees were scrambling to save some of the details housed on the website. Due to the gag order, Reuters did not name their source, and rightly so. We need to protect these brave souls letting us know of the Orwellian tactics Trump’s camp is now practicing.

It’s unclear how long the gag orders will be in place, although we have yet to hear of the other agencies being instructed to remove content from their sites. Badlands National Park, however, went rogue on Tuesday, sending out three three climate-related tweets that have since gone viral -- especially as they were forced to delete them several hours later. 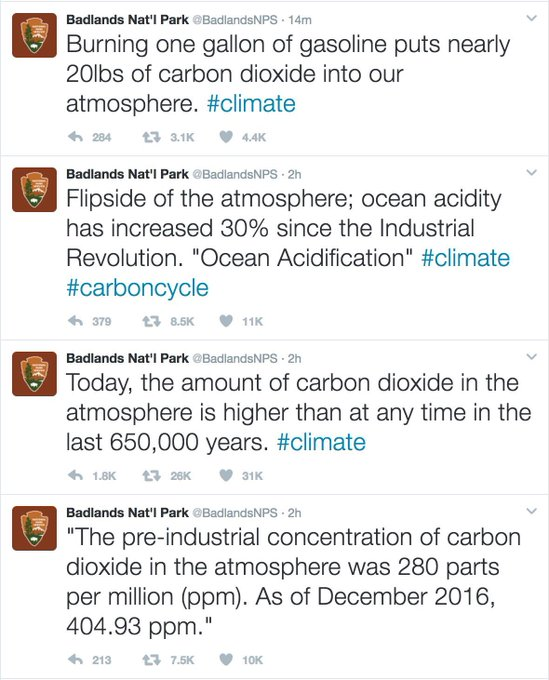 Of course, the official explanation from the National Parks Service is that these were deleted because they were posted by a former employee who still had access, and needed to be deleted because that person did not have authorization to use their account. During the past weekend, the Interior Department’s Twitter account was even suspended for retweeting critical photos of Trump’s inauguration, and earlier today, White House press secretary Sean Spicer addressed an incident at the Defense Department where tweets were posted with “underhanded criticism” of President Trump. Spicer said an “unauthorized user” had an old password and logged in before tweeting “inappropriate things that were in violation of their policy.”

Seriously? Couldn't you even put a little effort into coming up with a better flimsy excuse?

“Is President Trump the only one allowed to tweet in government right now?” Liz Purchia, who was EPA press secretary for the Obama administration, said in an email to The Associated Press. “I just keep thinking how thankful I am there isn’t an emergency disaster EPA needs to respond to right now. ... It’s one thing to get your ducks in a row, but to put a gag order on public servants and all agency activities, not only prevents them from doing their jobs. It puts our country at risk.”

I wish I were surprised. I really do. Unfortunately, I don’t think this will be the last time we see the Trump administration going against the basic notions of government transparency and accountability. Trump’s still refusing to release his tax returns and throwing shade about his inauguration numbers, so why the hell would he allow government agencies to share information about climate change, let alone imply any sort of criticism of him?

It’s gotten so bad that there is actually a “resistance” Twitter account now, allegedly run by the scientists, park rangers, and employees (current and former) of the silenced departments. Described as “The Unofficial ‘Resistance’ team of U.S. National Park Service”, @AltUSNatParkSer has already amassed 989K followers in a matter of days. With the help of the newly formed political group 314 Action, they are organizing a scientists' march on Washington and a political campaign to get one of their own elected. After a weekend of being awash in pink from the Women’s March, it looks like Trump will have to become familiar with a crowd of lab coats.

“This is not a partisan issue. People from all parts of the political spectrum should be alarmed by these efforts to deny scientific progress,” Caroline Weinberg, a medical researcher who is helping organize the march, said. “Scientific research moves us forward, and we should not allow asinine policies to thwart it.”

Naomi Oreskes, a science historian at Harvard, pointed out that looking further into the past reveals another telling example of scientists organizing. “It is the scientists who mobilized against the arms race in the late 1950s and 1960s,” she said. “So that tells you how scientists feel now. This is an existential threat.”

An existential threat. I couldn’t think of a better description of this power move from Trump’s administration. It doesn’t matter how many times Sean Spicer can claim that this is just a review of communication policies. Yes, a basic review makes some sense under a new administration, but blocking your scientists from sharing fact-based research is taking things a step too far. Ken Cook, president of the advocacy Environmental Working Group, said it best:

“Vladimir Putin must be proud. The EPA, like all federal agencies, is funded by taxpayer dollars, and Americans have the right to know what’s being done to protect or harm public health and the environment.”

Not under a Trump presidency, I presume. Having already signed order reopening the Keystone XL pipeline and Dakota Access Pipeline (DAPL) despite the numerous risks of contamination to drinking water and land, Trump clearly does not have the environment on his mind. Of course, approving DAPL could just be another one of his conflict of interests since he has vested financial interests in its completion.

Yes, we should cut down our reliance on overseas fossil fuels, but in reality, we should be cutting down on fossil fuels, period. Of course, Trump’s oil industry friends would never allow that. The Trump administration is already moving to delay implementation of at least 30 environmental rules finalized in the closing months of former President Obama’s terms. It’s the first step in killing those regulations, with Trump’s directive freezing all federal agency rules that have been finalized but have not yet taken effect.

Perhaps it’s bad form to quote oneself, but in my analysis of Trump’s ‘America First Energy Plan’ earlier this week, I shared the following:

“It’s not like 2016 was the warmest year on record or anything, or that of the hottest 17 years recorded, 16 of them have occurred since 2000. Oh wait. Perhaps we should forget that we are experiencing the sixth mass extinction event in 3.8 billion years with the ongoing Holocene extinction, or that a new scientific study confirmed that 60% percent of all primates are at risk of extinction, or that the global population of wild vertebrates (that’s mammals, birds, reptiles, fish, and amphibians) has declined by 58% percent, which can be linked to climate change. But that’s okay, because Trump’s plan seems to ignore climate change and focus on his energy plan.”

And it’s still true. The only thing Trump has demonstrated this week is his complete lack of regard for the environment. Keeping scientists muzzled and pushing forward with his energy first plan hurts no one but Americans. Climate change is not a hoax, President Trump. There is no debate about its effects, and that we need to be doing to counteract the destruction we’ve already inflicted on our planet. We can negotiate and survive without fossil fuels, but we can’t survive without fresh water, clean air, or the state of our nation’s environment. So much for giving us back our country.