Trump VS. LGBT Rights: The Side You Haven't Heard

Unless you have been living under a rock for the last couple of days, you've noticed that the LGBT community has been losing their collective minds. Love him or hate him, Donald J. Trump is now President of the Free World – and the gay community is crying rivers that would put the Mississippi to shame. Poor Perez Hilton can be seen here, blubbering like an infant, in the wee hours of the morning while Trump was securing his victory.

In a statement released immediately following the election, President Chad Griffin of the Human Rights Campaign wrote:“The election of a man who stands opposed to our most fundamental values has left us all stunned.”  The HRC is the largest LGBT civil rights advocacy group in the United States, with their cute little equal sign bumper stickers plastered all over vehicles across America. Clearly, they supported Hillary Clinton during her run for the presidency, as did most minority groups in the country – but are they right to be pouting?

As a Republican, Donald Trump has taken a controversial stance as a member of the GOP: a position that openly supports gay rights. In his acceptance speech at the Republican National Convention back in July, he even stated: "As your president, I will do everything in my power to protect LGBTQ citizens."  Followed by mild applause from the audience, Trump went off the cuff to add "I have to say, as a Republican, it is so nice to hear you cheering for what I just said. Thank you."  That's a pretty bold statement to make in a room full of conservatives, with a fair portion of the country watching.

After the infamous massacre at the gay Orlando nightclub Pulse (the shooter supporting ISIS and their cause), Trump stated "Clinton wants to allow radical Islamic terrorists to pour into our country— they enslave women and murder gays. I don't want them in our country." These certainly don't sound like the words of a gay-bashing Fascist. Apparently leaving the decision up to the states isn't considered a bold enough move for the LGBT community, one that is constitutional, and has worked out fine for the gay population thus far.

Throughout his candidacy, there has been no written statement or position from the President Elect that opposes same-sex marriage. What else does the community want? Should he be parading at gay rallies, in a pink getup, waving rainbow flags like Canadian Prime Minister Justin Trudeau? If that's your expectation, I wouldn't hold my breath. 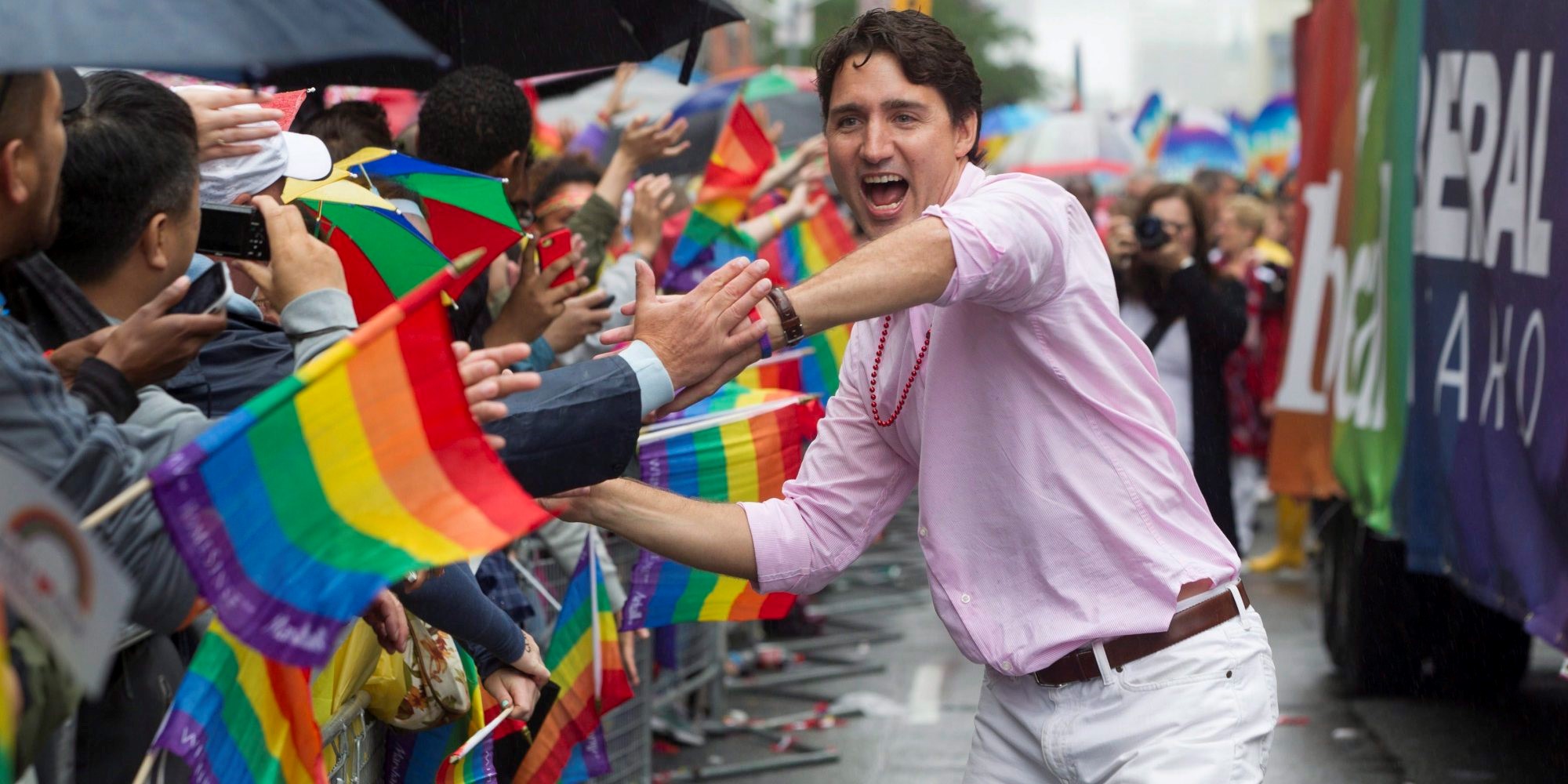 If I were a member of the LGBT community, there is only one man I would be worried about – Vice President-Elect Mike Pence. In a Congressional speech back in 2006, he stated: “societal collapse was always brought about following an advent of the deterioration of marriage and family.” This statement alone doesn't directly advocate against gay marriage, of course. During his successful run for Congress in 2000, he wrote a number of conservative-leaning, anti-gay messages on his archived campaign website.

Here are some of the juicier snippets:

"Resources should be directed toward those institutions which provide assistance to those seeking to change their sexual behavior."

"Congress should oppose any effort to put gay and lesbian relationships on an equal legal status with heterosexual marriage."

"Congress should oppose any effort to recognize homosexual’s [sic] as a 'discreet [sic] and insular minority' entitled to the protection of anti-discrimination laws similar to those extended to women and ethnic minorities."

Ouch. If you're wondering about the details of that first line, the institutions that “assist” gay individuals seeking to change their sexual orientation administer Conversion Therapy – and it's pretty disgusting. Essentially, groups that advocate for this type of therapy (such as NARTH, The National Association for Research & Therapy of Homosexuality) claim that homosexuality is a choice, and under treatment, a patient would be able to “pray the gay away.”  The method is reportedly so dangerous that it's banned in five U.S. states for use on minors – including California, New Jersey, Vermont, Illinois, Oregon, as well as the District of Columbia. If only George Orwell could see us now!

If I weren't a straight, white, CIS male, I would be shaking in my boots at the thought of a Mike Pence Administration – but the bottom line is that he is not going to be the one ultimately calling the shots on domestic policy (not yet, anyway). The seemingly contradictory philosophies from Trump and Pence have left some Americans confused, and they should be. The POTUS has openly stated that he will support the LGBT community and their right to choose, while our newly-elected Vice President has advocated for the opposite. So which America are we going to get?

Some believe that the selection of Pence by Trump was merely a strategic move intended to rally the Christian Evangelical vote in Trump's favor, and it certainly worked. This allowed some of the more traditional, conservative GOP supporters to grudgingly back Trump when it came time to submit their ballot, and he won the historic “red states” in spades. Ultimately, we don't know whether or not Donald Trump is going to allow Pence to have a say in how domestic policy is determined in the U.S.- but if you're gay, lesbian, bisexual, trans-gendered, furry, or dragon-kin, you'd better hope that it'll be Trump making most of the domestic decisions in his first four years as President.