The Shadow Government, I'm Shaking in My Boots

I don't really have to say that, right? I mean, my opinion on politics is pretty clear by now. And while I try to build bridges with my left-leaning brothers and sisters, sometimes mockery is the only way I know how to express my utter shock at what the left has become.

In the past, I've shown respect for the party of Martin Luther King Jr. Ages ago they did stand for something: protecting and respecting people who were oppressed or underrepresented. But, as Bill Maher recently said, the party is now about protecting feelings instead.

While my criticism of the Democratic Party stems from my belief that their core platform of Socialism (ooh, excuse me, I mean "social justice") is fundamentally un-American, I cannot ignore the simply childish and unprofessional way they've been behaving in recent memory.

When they're not working to betray their own candidates, conspiring illegally with Super Pac's, they're making a show of crocodile tears on national news. I mean seriously, Chuck, nobody's buying it. You're a worse actor than your niece, Amy.

And while you can claim Republicans are as guilty of similar pathetic displays, we at least have a strong representative right now in the White House. Before Trump announced his candidacy, I had little hope for the 2016 election. We all knew Hillary was going to run again, to grab that crown she was deprived of in 2008. I had the feeling that unless the GOP produced a truly unique and powerful figure to combat her, they had little chance of securing the General Election.

Because Presidential Elections are won with personality, not facts or logic. (If they were won with facts and logic, conservatives would win every time).

So with President Trump, conservatives have a stiff new dose of resolve, confidence, and energy. More so, I'd argue, than liberals had with Obama in 2008.

I say that because conservatives have the White House, House of Representatives, Senate, and thirty-three governorships.

With such a titanic defeat at the polls- and with 2018 uncertain- what do you think liberals should be doing? My opinion has been clear: reform the damn party. If you are the "party of the people," what are you doing with billionaire elitists like Warren Buffett and George Soros? If you want to win over middle America, why are you clinging to hateful, alien rhetoric from SJW's, black activists, and transgender groups?

Americans love tradition (as do all humans) and while you may think this world would be a better place with transgender Muslims wearing hajibs and marrying coyotes (or whatever the current liberal platform is), you'll have a hard time convincing the rest of the country.

But instead of returning to American values, embracing the Constitution, and rejecting radical or Socialist policies, it seems the left is determined to destroy whatever goodwill they have left with the American people.

Their strategy, thus far, has been to protest. Eh... why? Protests look convincing when portrayed on TV, but we already know that media has less influence than the president. People have so little trust in the mainstream media; it's at an all-time low. They couldn't get Hillary elected, why do liberals think coverage of protests will do anything to help them?

I talked about this before, but let's make it simple: how do liberals think they can win over America with stunts like this: 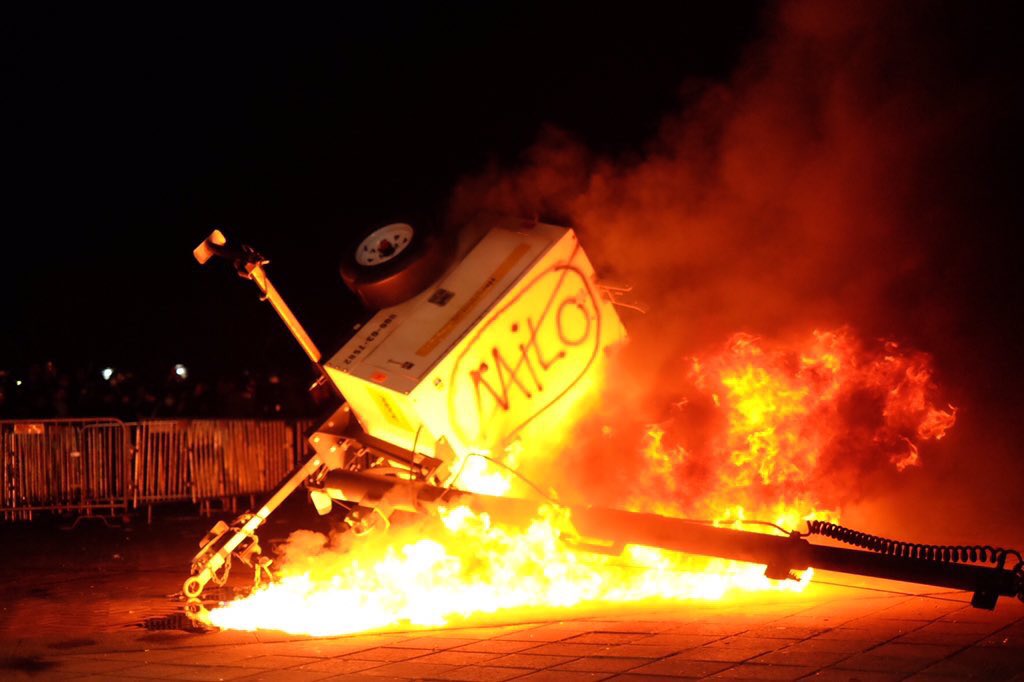 That's anarchy, violence, rioting- not the kind of thing to win over the hearts of the American people. We are a nation built on democracy, freedom of speech, and unprecedented power granted to its citizens. Power that only works when we peacefully work together.

Protests do that very poorly, because they create an atmosphere of hostility. They paint people out to be angry, hateful, and violent.

That's kind of counter-productive for the cause of democracy.

And now, most pathetic of all, the former president of the United States is rumored to jump on the "let's make a lot of noise and accomplish nothing" band wagon.

In what’s shaping up to be a highly unusual post-presidency, Obama isn’t just staying behind in Washington. He’s working behind the scenes to set up what will effectively be a shadow government to not only protect his threatened legacy, but to sabotage the incoming administration and its popular “America First” agenda. (via NY Post)

Ooooo! A shadow government. Sounds scary as hell, right? Sort of conjures images of the Illuminati, a heavily-robed secret society that meets in a castle on dark nights and decides the fate of the world. A shadow government makes you think of a group of unelected demagogues working to undermine President Trump, Congress, and the rights of American citizens.

It makes you think of an evil organization with the unprecedented power to pass secret laws, policies, even assassination attempts.

But what is Obama really doing?

He’s doing it through a network of leftist nonprofits led by Organizing for Action... Since Donald Trump’s election, this little-known but well-funded protesting arm has beefed up staff and ramped up recruitment of young liberal activists, declaring on its website, “We’re not backing down.” Determined to salvage Obama’s legacy, it’s drawing battle lines on immigration, ObamaCare, race relations and climate change.

Oh, a "protesting-arm." That's all? All that the former president can do is back a group that will waste Soros' money in forming more protests?

How many more protests will the left mount before we all in unison reject them? I'm already sick of it. Some of the more recent ones had Muslims blocking major airports across the country. Really? You think you're going to motivate the government and the American people, by grossly inconveniencing them?

Why don't you try that out at the height of the Summer travel season? Then you'll really see how Americans like you!

But protesting isn't just what Organizing for Action is all about. They also want to manipulate future elections.

OFA, in IRS filings, says it trains young activists to develop “organizing skills.” Armed with Obama’s 2012 campaign database, OFA plans to get out the vote for Democratic candidates it’s grooming to win back Congress and erect a wall of resistance to Trump at the other end of Pennsylvania Avenue.

Good luck with that. Hillary had Super Pac's breaking the law by bussing people into polling stations. That didn't work out so well.

And the thought that this political group could win over enough people to affect elections is terribly naive. Just think about it. Hillary Clinton had over $2 billion dollars to spend on the election. She had the support of Wall Street execs, Hollywood celebs, and the lion's share of the media. She had organized political activist groups to undermine Donald Trump's campaign.

She even had Billy Bush release embarrassing audio of Trump.

Yet she still lost, BIG LEAGUE.

What does Obama hope to accomplish with his group of organizers? With a fraction of what Hillary had, it's unlikely they are going to move the needle in liberals' favor anytime soon. Why? Not because of a lack of money, resources, people, or big names. But because they've driven a wedge between themselves and the American people. They've planted their flag on a mountain of rhetorical nonsense and radical beliefs that too few in this country want to be a part of.

So sure, organize the hell out of yourself. From enough shadowy governments to run a hundred fake countries. It will make no difference.

Liberals lack the intelligence, strength, or integrity to win over the American people.