Sanders Save Us All

Oh, to imagine what could have been. In the wake of one of the most upsetting, volatile elections in history, one can’t help but wistfully imagine the outcome if one of the best politicians of this century would have been allowed to run in the final race. 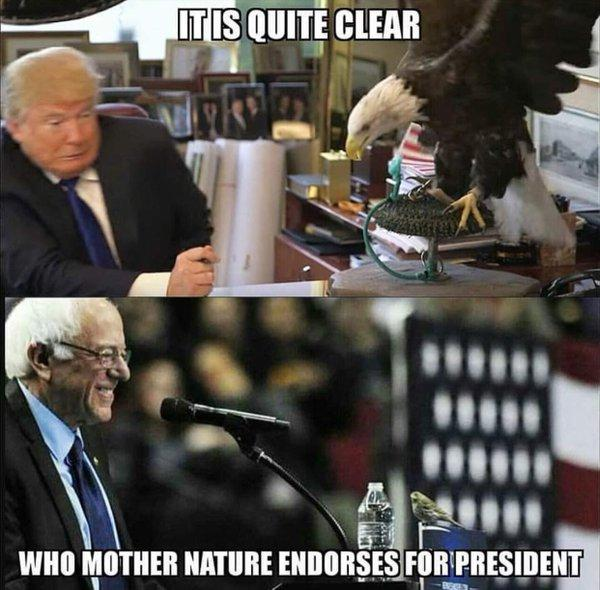 Call him a communist all you want, but Bernie Sanders was the only real candidate able to battle the populist campaign of *deep, involuntary shudder* President-elect Donald Trump. With an 80% approval rating as Senator, Sanders was and still is one of the most well-liked, and more importantly, trustworthy politicians. During a revolutionary time that the institutions refuse to acknowledge, both Sanders and Trump tapped into the anti-establishment anger of a “declining middle class,” filling their rallies with passionate, disenfranchised citizens.

What could have been then, if the Democratic National Committee (DNC) had not actively conspired to ensure Hillary Clinton won the primary and became the party’s candidate? Sanders brought thousands of voters into the Democratic Party, but rather than embrace him as the powerful political entity that he was, the Democrats did everything they could to work against him.

Clinton was the embodiment of the establishment and institutions that so many were angry with. With a staggering 3 out of 4 Americans seeing the governments and banks as corrupt, it’s mind boggling that the Democrats would essentially resign themselves to a political death by championing a woman characterized as one of the least liked politicians for decades- not to mention the scandals and FBI investigations.

Time and time again, supporters of the crazy-haired, frequently cantankerous Democratic socialist cried foul as both the DNC staff and media prepared a coronation for Clinton with zero consideration for Sanders and his followers. Rallies for the 74-year-old exuded euphoria, excitement and frenzied enthusiasm for someone finally willing to acknowledge and fight for the working-class. With his calls for free college tuition, the removal of student debt, national health service, and (most importantly) removal of corporations and big money from politics, Sanders was the voice of reason cutting through the exclusive 1%. He threatened the status quo of politics as we know it, with a new campaign fundraising model of citizens who funded him with continuous, small amounts donations. There were some reports of his donations averaging around $27.00.

By cutting out the billionaires with agendas, giant corporations, and garden-variety celebrities willing to pony up obscene amounts of money for the chance to take selfies, Sanders only needed to answer to those funding him: the hard-working, American middle-class. He championed issues that were important to them, as opposed to elites whose experiences resonated little with the public.

So excuse Team Sanders right now, as we have absolutely nothing nice to say about this election outcome. I would be tempted to sell “I Told You” shirts if I wasn’t so terrified of the repercussions of a Trump presidency- building a bomb shelter in the backyard doesn’t seem so tin-hat insane anymore.

As Trump shook up the Republican party, Sanders was the golden opportunity to do the same to the Democrats. With the left in desperate need of reform and reevaluation, the blatant disrespect and underhanded tactics of the DNC just reaffirmed the corruption claims many believed. In fact, it garnered him the unprecedented support of many Republican voters, who saw him as the voice for all Americans.

There are now numerous outlets detailing how Sanders would have beaten Trump if he had been the Democratic nominee. Clinton received millions of fewer votes than projected, which would never have been an issue with Sanders supporters. The Trump voters who came out in droves are the same as the Sanders voters; they’re two sides of the same coin. Supporters of both these candidates were scared, angry, frustrated citizens who felt that those in the House just didn’t care about them anymore. Sanders’ personal story of burning toilet paper in an empty coffee can to cook food was more relatable than Trump’s billionaire status. Clinton could never project the same “one of us” image, and her supporters never had the same fervor Trump or Sanders’ had.

“The ‘establishment didn’t listen, wasn’t vigilant, and got cocky,” a former Sanders campaign senior aid emailed Wednesday morning to the Daily Beast. “The party and relationships were really damaged by WikiLeaks. The electorate did not trust [them], and young folks were not elevated in a meaningful way. [It was a] lack of investment, [and] Clinton folks thought they could replace black voters with Latinos...It’s just a mess.”

“Trump is going to be the next president of the United States,” said another Sanders aide, “This is all on Hillary Clinton and her team. There’s nothing more I have to say on this.”

Back in May, a poll by NBC News - Wall Street Journal said Clinton would beat Trump by three points, but said Sanders would win by 15. Fox News said Clinton would lose by three points, but Sanders would win by four. Using hypothetical match-ups during the primaries, Sanders polled better against Clinton, and with higher support than Trump. It didn’t matter that Clinton won the minority vote; white, blue-collar Americans gave key Midwestern states to Trump, allowing him to win the electoral college. Had Sanders been running, it would have been a different story. Using the exit poll data from the preliminaries, US Uncut developed the following map, depicting just how much Sanders would have *ahem* trumped Trump. 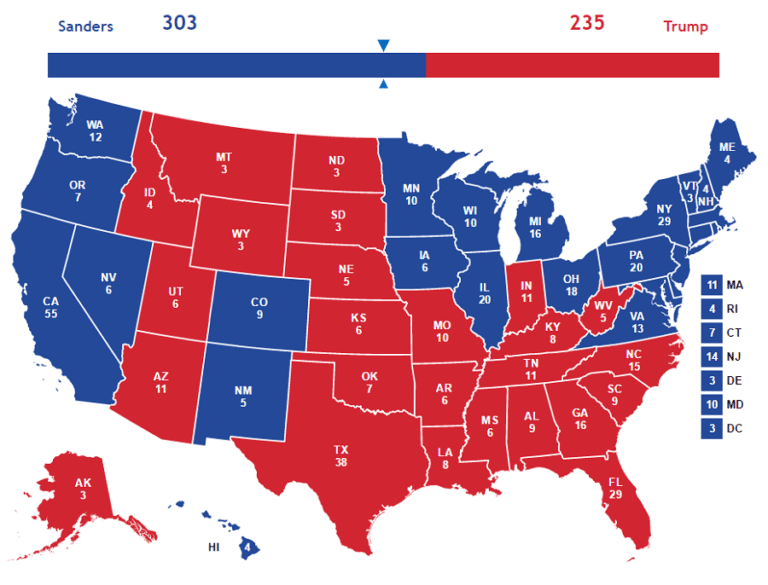 In Indiana, Sanders beat Clinton by 5 points. His dominance with white voters (57% support) and men (59% support) would have pushed him over the top as they collectively compose up to 72% and 42% of voter respectively, AND he won the support of a whopping 72% support from the independents. Conversely, Trump won 53% of white voters, and 59% of men--roughly the same percentages Sanders won. But Sanders won the majority of voters who made less that $30,000 in 2015, and between $30,00 and $50,000. Trump won 54% of this demographic, but who do you think they would have chosen if we compared these two candidates side by side?

Most of the population in West Virginia live in rural areas working blue-collar jobs and are statistically some of the poorest in the country. So formerly poor Sanders won by 15 points in the primaries: 52% of the whites, 53% of the male vote, and beat Clinton by 32 points among those making $30,000 to $50,000. It’s the same story in Wisconsin. Sanders defeated Clinton with the support of two-thirds of the male vote and 59% of the whites, who compose 83% of the voting population in the state. Unsurprisingly, his rhetoric was embraced by the middle-class voters here, allowing him to win with a 60-39 margin against Clinton. While Trump won their hearts by appealing to their desire for a reduced foreign policy, back in the primaries, 74% of them supported Sanders policies in this same regard.

Sanders offered the Democrats an even bigger advantage in the kind of race he would have run. The Clinton campaign was an incredibly smooth operation during a time when people were quite vocal about their distrust of smooth operations handled by public relations experts. It was full of fancy videos, celebrity endorsements, impeccable web designs and political glamor. Her campaign seemed fixated on appealing to the educated, metropolitan liberals who never would have voted for Trump anyway. In sharp contrast, Sanders’ grandfatherly presence and grassroots campaign efforts not only belied Clinton’s over-the-top presentations, but would have highlighted Trump’s ostentatious wealth and lack of connection to the average American. No public relations staff needed because voters were capable of reaching the message themselves: why would you trust these immensely wealthy billionaires to put the population’s interest first? And with no need to answer to anyone donating immense amounts of financial contributions, Sanders was free to address the corruption both he and his supporters saw rampant in the government and other large institutions.

“Birdie” Sanders should have been given a fair shot. 2016 was a year in which voters demand change from their government. Clinton not only represented the status quo, but everything corrupt and wrong with the establishment. Trump, with his lack of political experience and perceived candor, was able to ridicule her and focus on her weaknesses. She was never able to evoke the same passion Sanders did. As it stands now, the Democrats need a complete overhaul to begin to appeal to the public again, especially after losing so many seats in the House and Senate.

Sanders hasn’t ruled out a run in the 2020 election, but four years is a long time away. “We’ll take one thing at a time,” the Vermont senator said. He has responded with grace over the last 48 hours, never publicly criticizing Clinton’s campaign. He instead blames the election results on the failures of the DNC.

Sanders was one of the best almost-revolutionaries of our time. He could have saved us from #Trumpocolypse, but now we’ll never know.