Reddit and 4chan posters have been busy attempting to uncover an elite child-trafficking network following a Wikileaks email releases. Some of this private investigating (if you can call it that) implicates James Alefantis, owner of a Washington D.C. restaurant called Comet Ping Pong. It’s a seemingly normal establishment, where you can grab a slice and play some games with friends. Prior to the presidential election, Alefantis’s Twitter, Facebook, and Instagram began to explode with threats of stalking and murder. The internet has implicated Alefantis, the Podesta brothers, Hillary Clinton, and others in a conspiracy involving the systematic kidnapping, trade, and rape of children. Is this all insane conspiracy theory, or is there any truth in the fiction?

Before the presidential election, James Alefantis started noticing threatening messages all over his social media accounts. “I will kill you personally” read one, and comments like “we’re on to you, we’re watching you” were starting to become commonplace. Alarmed, Alefantis began searching online to see what this whole thing was about. In his investigation, he found several conspiracy theory articles about him felicitating the torture of children in his establishment for elite clients. Obviously, Alefantis denies these outrageous claims, citing the recent fake news wave following the presidential election:

“I’ve done nothing for days but try to clean this up and protect my staff and friends from being terrorized.”

Mr. Alefantis, 42, is an artist born and raised in Washington and co-founded Comet Ping Pong 10 years ago. It’s themed as a fun pizzeria, where family and friends can play ping pong, and make arts & crafts. The restaurant became popular enough to place Alefantis No. 49 in GQ magazine’s 50 most powerful people in Washington in 2012. He rubs elbows with some pretty influential people, too. Famous patrons of Comet Ping Pong include Tony Podesta, a lobbyist who founded the Podesta Group. Tony’s brother John Podesta is a powerful figure as well. He served as campaign chief during Hillary Clinton’s campaign for the presidency, counselor to President Obama, and Chief of Staff to Bill Clinton. A number of strange emails sent by John were released via Wikileaks, a digital shit-storm started to swirl, and #Pizzagate was born.

So what’s this all about? A Wikileaks release revealed that Alefantis sent an email to John Podesta in March about his new pizza logo for Comet, and at first glance, it seems perfectly normal. 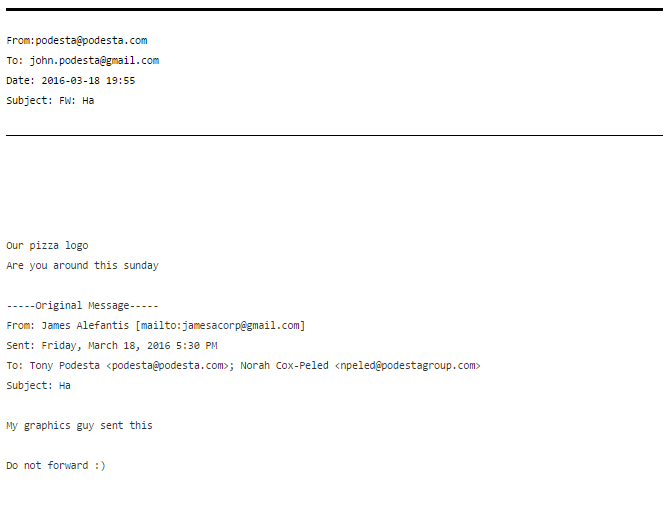 Alefantis is sharing a new pizza logo on his menu with John. What’s so weird about that? Conspiracy theorists claim that pedophile groups use subtle symbolism to share their love of abusing children with other pederasts, as some sort of sick advertising strategy for underground sex rings. In another Wikileaks reveal, the FBI apparently catalogs these symbols to investigate pedophiles and stop child trafficking. So where’s the connection? Well, take a look at Alefantis’ new menu logo in comparison with the unclassified symbol for “child lover”:

I could see how one could make that connection, but let’s face it – there are only so many types of symmetrical symbols that can be designed, and a heart/butterfly-like pedophile symbol compared with two ping pong paddles isn’t exactly jaw-dropping information. The email seems kind of weird as well, with the subject of “Ha” as the title. What’s so funny about ping pong paddles? Strange, but it’s certainly not going to put a high-profile businessman behind bars. Let’s take a look at Alefantis’ Instagram account. 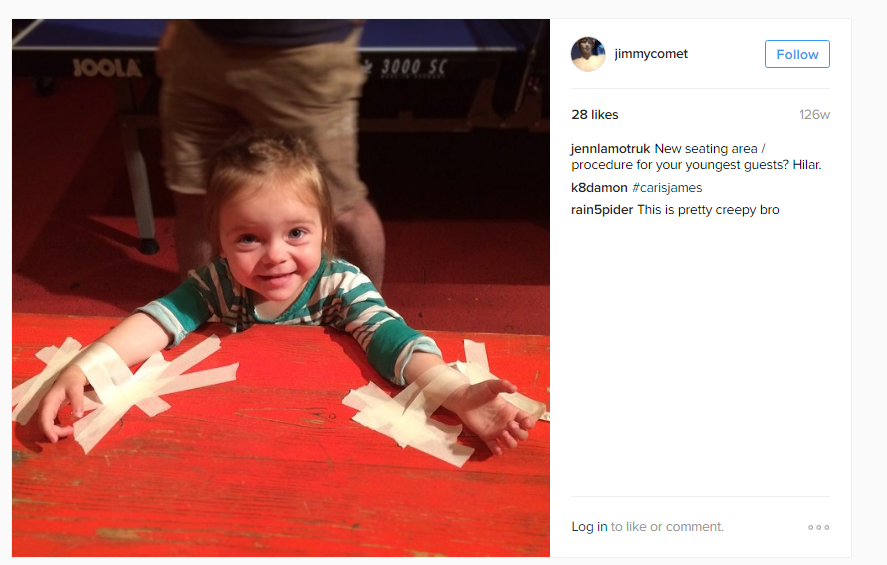 Okay… well, he’s not exactly hurting this young girl, right? He’s just depicting her as a tied down slave. Look, she’s got a smile on her face and everything! James Alefantis thinks this is “Hilar.” Depicting children being tied down is hilarious guys, settle down. What else? 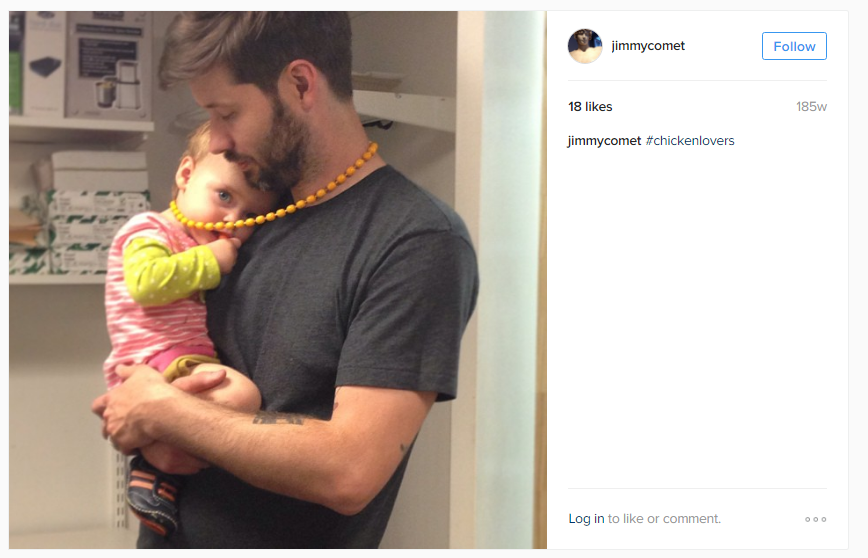 Here is a photo of James holding a cute kid. It’s a sweet photo, really. The child is not being taped down to a table or – wait, what the fuck is a #chickenlover? According to Lingomash, “chickenlover” is defined as slang for “Pedophile one with a sexual attraction, and need for young boys, under the age of consent.”

While there is no hard evidence to implicate James Alefantis in a high-powered underground child trafficking ring, public information (including his own posts on social media accounts) seems to paint him in a strange light. The guy can deny these allegations as much as he wants, but you have to admit that tying down kids and calling yourself a “chickenlover” is odd behavior. Frankly, I don’t know what to believe anymore. The mainstream media has been known to protect powerful people, including Hillary Clinton, but would they stoop so low as to back a bunch of child rapists?

Authorities have apparently taken the matter seriously. In a released statement, the District of Columbia Metropolitan Police Department said that it was “aware of general threats being made against this establishment [Comet Ping Pong].” The F.B.I. said that it “does not confirm or deny the existence of investigations.” These are pretty blanket statements, but the generic F.B.I. claim does leave one wondering – what are they investigating? Are they going after the ‘internet superhero trolls,' or Comet Ping Pong for the child trafficking allegations? Perhaps they’re looking into both situations, or maybe this is so prevalent among the elite that they’ve been told to turn the other cheek. It wouldn’t be the first time that authorities looked the other way. In 2014, 1,400 children were abused by government employees in an underground sex trafficking scandal in the UK, shocking the world with its discovery. During the investigation, police and authorities were told to simply ignore the matter.

We live in a world that can at times appear to be sick and twisted. I don’t condone, but do understand why terrorists bomb buildings and kill innocent people. From their perspective, it makes sense. I get why high-profile people are locked up for fraud or embezzlement. I even understand why pedophiles and rapists would want to keep their syndicate under wraps – who would want to be jailed for something they love? What I don’t get, if these conspiracies are true, is participating in the protection of these individuals. If you were an officer of the law or a Federal authority figure, could you turn the other cheek while allegations of child kidnapping and rape were made? Would you need the accusers to produce a body, DNA? I don’t think I’d be able to.

If any of these allegations contain a hint of truth, I hope all of the individuals involved end up swinging from a rope. Now if you’ll excuse me, I have some chicken to bake. I love chicken. I’m a chicken lov… never mind.