The "Irish Slave Memes" Are A Historical Distortion

While there I was, initially, having a good time. The band was incredible, the establishment we were in did not go in for the whole green beer thing, and I almost forgot about why I hate St. Patrick’s Day in the first place. Then a ruddy-faced, non-accented man came up to me and told me he was Irish. Everyone seems to claim this on St. Patrick’s, my great-great-grandpappy or whatever. He told me Irish history was long and sad (I hadn’t asked) and that they were, among other things, slaves in North America right along with the blacks (his word). I told him I had never heard of that and edged away, but over the last few days it’s been nagging at me, this notion of Irish slavery.

Normally, this sort of non-standard history is something I wouldn’t touch with a ten-foot pole. But, I work for a website that has a tab labeled “conspiracy, ” and I was losing sleep, I had to do something.

After consulting the internet, to mildly horrifying results, I have some conclusions, and they are as follows.

First, let me say that the idea of Irish slavery in the Americas is at best notional, at worst an outright falsehood. Though many thousands of Irish prisoners were forced into indentured colonial servitude, none were ever designated as slaves outright. What initially drew my attention to this narrative was the surprising proliferation of Irish slave memes on alt-right websites. Here are some examples: 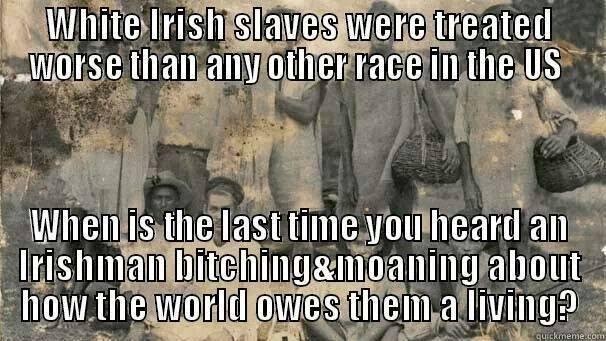 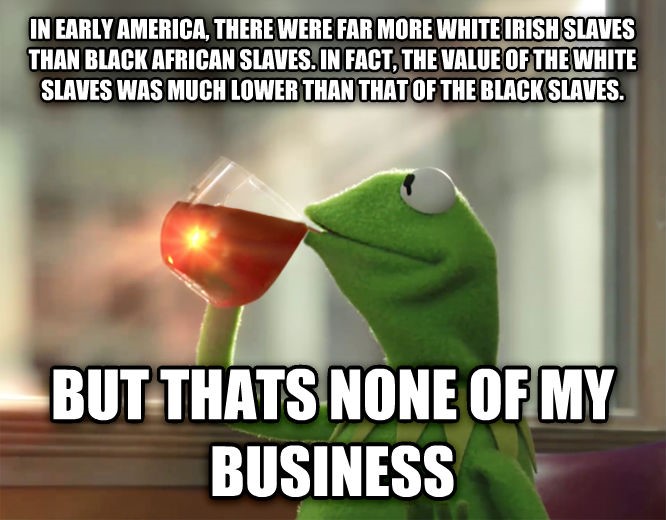 The memes differ, but the principal argument seems to be that white Irish were brought over to America as slaves, they were valued less than African slaves and that for some reason constitutes an argument as to why racism in contemporary America is either invalid or inflated by the legacy of African slavery. Having consulted the relevant sources, this whole narrative is bunk. Here’s why.

It might seem like I’m splitting hairs to open my argument here but the distinction is important. The Irish who were brought to America, and there is no doubt that thousands of Irish were deported to the colonies in the 17th century, were not brought as slaves. They fell into two dominant camps of emigrant: indentured servitude and victims of the 1603 proclamation. The indentured servants came to the colonies on a contract, usually between the servant and plantation owner, that stipulated they would work to compensate their passage across the Atlantic. While conditions on plantations were abject at best, servitude constituted an agreement between patron and servant, where the servant had knowingly agreed to the terms in exchange for transportation out of Ireland. The 1603 proclamation was a quiet ordinance by James I which proclaimed that, “rogues, vagabonds, idle, and dissolute persons” be “banished and conveyed” to “places and parts beyond the seas,” which was subsequently used to justify the deportation and exploitation of thousands of Irish in the latter half of the century. This is similar to the practice in contemporary America of making prisoners work for cents on the hour to repay their debt to society, and though that practice is a shaky ethical ground, it is not slavery.

While these people undoubtedly suffered, and were subjected to conditions which would have been abhorrent to their unindentured compatriots, they were not slaves. There are a few relevant distinctions on this point. The first is that slaves were removed from their place of birth with no justification, nor legal framework. They had committed no crimes or agreed to their servitude, they were stolen and remained so. Second, indentured servitude was bound to a specified term, between two and seven years for Irish servants. Slavery lasted a lifetime. Beyond that, chattel slaves passed their slave-status down to their children, something that did not apply to indentured laborers.

The memes often state that the Irish indentured laborers were valued lower than their African slave counterparts. They are not wrong in this assessment; however, the valuation differential comes from the fact that African slaves were viewed as property and Irish laborers as free men, who therefore could not be priced. What is painted in the false narrative as oppression of the Irish is, in reality, the very fact that they could not be bought and sold like chattel slaves.

While there were a purported 300,000 indentured Irish laborers brought to America, a statistic that Liam Hogan disputes in his excellent and worth reading “Debunking the Imagery of the Irish Slaves Meme,” even if we take that statistic it is dwarfed by the 12 million plus Africans that were brought to America against their will. While I am not in the business of prioritizing suffering, the sheer number of African slaves indicates the systemic and common practice of their removal, debunking the notion that there were more Irish working under similar conditions. The United States built an economy around the African slave trade, Irish labor was incidental to the development of a few colonies.

The comparison of indentured Irish labor and African slavery is fair in that the labor they were expected to perform was similar. There the similarities end. The Irish were still looked on as legal persons, as perhaps inferior but certainly as men having rights, the same outlook was not extended to African slaves. Arguing that the two groups suffered similarly denies the reality that African slaves and subsequently black Americans were denied their basic humanity for hundreds of years. To say that the period in which their exploited labor overlapped makes the experience equal dramatically undervalues how dehumanizing the treatment of African slaves in North America was. An African slave was property with which a master could do what they pleased, which extended to humiliation, beating, and in some cases death. This was not the case for the indentured Irish who were expected to work but who it would still be a crime to kill or abuse.

Additionally, the Irish slave memes are used to promote a narrative that contemporary black Americans are somehow exploiting the system by being justifiably upset about slavery and the terrible legacy it has left in America. I can’t think of anything more repugnant than saying that because another group of people suffered, then somehow the systemic oppression of yours is invalid or inadequate. The reality is that the suffering of Irish people in the 17th century was political, the suffering of black Americans was racial.

In conclusion – I am happy I edged away from the ruddy-faced man at the bar. Too often do white Americans tie their histories to a perceived oppression, and unfortunately, the history of Ireland lends itself beautifully to building a chip on your shoulder. But that guy in the bar isn’t from Ireland and does not understand what it is like to be a minority in a country that still has a lot of unresolved issues surrounding your place in it. He understands what it’s like to see a meme and think that, “Hey, I suffered too and you don’t see me complaining.” That isn’t good enough.