A Day Without Women: What Is The Point?

Obviously, I joke when I applaud a day without women. As a man who was raised by a strong, conservative, single mother, I have great respect for women and their role in our society and my life, personally.

America has made great strides to ensure women have the same rights as men. I challenge you to find another country that has worked so hard to provide voting rights, equality in the workplace, even the eradication of sexual harassment, as America has.

You can claim that there are still problems in our society, but that's not because of lack of trying. There will always be jerks among us, who- out of their own insecurities- look to demean or bully other people. This is true of men who abuse or harass women. But that is not a reflection on all of us. America is a nation that prizes and respects its women.

So what can we say about this new Women's March group, program... whatever they're calling themselves? On January 21, one day after Donald Trump's Inauguration, primarily liberal women swarmed on D.C. to do... something.

They claimed it was about women's rights. That sounds fine. Rights need to be protected by each generation, or they will be lost. So the march could have been about protecting the success women have won over the years.

Yet, that's not what the march was about, was it? It was very clearly about liberals complaining that Trump was president. A man who just got into office, who made no plans to revoke women's rights (name a campaign goal or agenda that aims to eliminate women's rights, I dare you), a man who literally hadn't done anything yet.

The Women's March wouldn't allow pro-life women to march with them. The Women's March allowed black activists to lash out against white women (solidarity much?).  And ultimately, it served to give an aged, unlikeable pop star the opportunity to announce her fantasies about killing the president and everyone who serves him.

Not a great victory for women's rights. I don't have to bring out this video again to highlight the pointlessness of the march, but I will:

I've already written about how the march was just a front for the abortion industry, a collection of organizations and lobbyists who make money from an evil and barbaric practice. Any important issues facing women today were co-opted by this one, terrible industry.

But aside from that, the Women's March did nothing but give liberals a chance to say they're not happy with the outcome of the election. Don't worry- we got it.

What were their other goals? What was the agenda? Are they petitioning the government for a redress of grievances? If so, what grievances?

Do they have specific legislation they want to pass that will ensure the rights of women?  Did they outline clear, actionable ways they can change legitimate problems in our society? What are those problems anyway (citing specific facts or examples please, this is a legitimate conversation)?

You see, way back in the late 1800's and early 1900's there was this thing called the Suffrage movement. It was an ongoing campaign to ensure that women had the right to vote. It started small, in local and state elections, but eventually became national. The 19th Amendment of the Constitution solidified the protection of all citizens to vote, regardless of sex.

That was a great movement. The end result was a massive victory for women in America. But why did it work? BECAUSE IT HAD A CLEAR GOAL.

I hate to keep saying this, but the ongoing protests and riots from the left after the election of Donald Trump have no clear goal. Except for the goal of creating violence against fellow Americans. Liberals are upset over Trump's victory, but they are powerless to do anything because they have nothing to fight about.

He's certainly not going to stop you from being a lazy college student that smokes pot and goes on to live in your parent's basement until you’re forty. So you're safe.

But he is going to jeopardize the stranglehold that globalists and established insiders have on this society. That's something everyone should be happy about.

This brings me back to the Women's March and their recent plans to continue their goal of nothing.

Organisers of the ‘Women’s March’ have decided that there is more to be done on the issue of gender equality.

Tackling the issue head on (or something), organizers have set a day for a strike dubbed “A Day Without A Woman” for March 8, which is International Women’s Day.

“In the spirit of women and their allies coming together for love and liberation, we offer ‘A Day Without A Woman,'” the organizers said in an Instagram post. (via Milo). 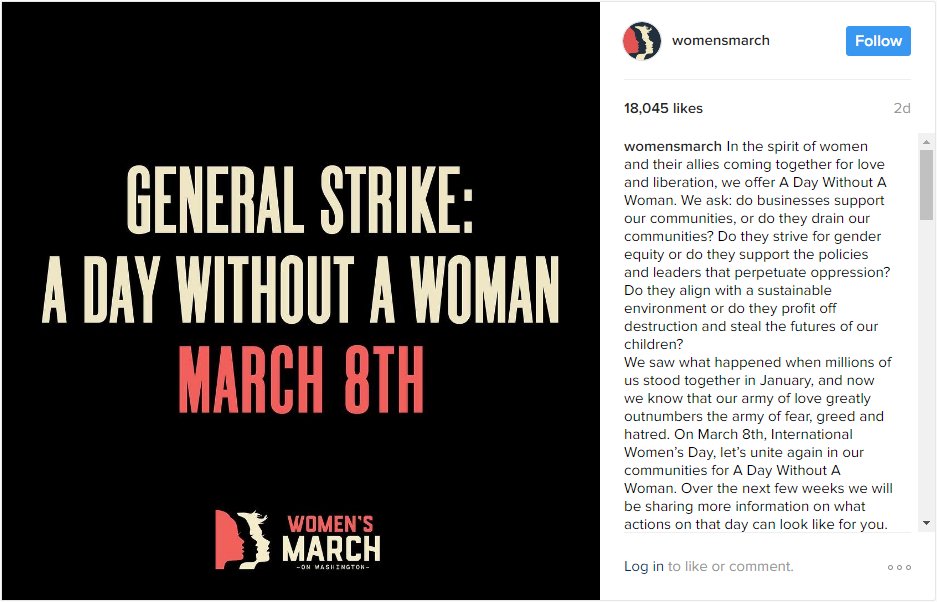 (Notice how they said women "and their allies." Um, you mean men? Are you enlisting the aid of Martians?  Because outside of women, you’ve only got men.)

I love the part where they say, "We saw what happened when millions of us stood together in January." What happened? You marched and let Madonna (and a convicted murderer) embarrass every woman there. What tangible thing happened? Was legislation passed? Was anyone removed from office? Were the minds of millions of working class men and women changed? (Good luck trying to prove that one).

I’d really like to know what they hope to accomplish on March 8, the "Day Without Women." Are they all going to get on a ship and fly to the moon? Because that's the only way they can properly remove themselves from society. It's not like moms are going to neglect their children for a day. Wives aren't going to suddenly ignore the men they love and cherish. Working women don't have the luxury of abandoning their jobs for a day, to embrace some nebulous goal of "sending a message."

A few smart people weighed in on the issue:

@womensmarch I work at a hospital. Borderline abuse to abandon position. Plus I disagree and think this movement is stupiiddd.

@womensmarch @reshmasaujani Soooo, a LOT of women can't actually just decide to take a day off. But go on ahead with your privilege. pic.twitter.com/Vvc41dgKe7

@womensmarch What a celebration of pure privilege. I am feminist scientist-I take off that day, I lose months of work and fail.

You see, even feminists hate this idea. But I love a few of the more, ridiculous responses:

@womensmarch Yes! Does that mean they'll stay off the golf courses and not slow the game down? Golf day!!!

@womensmarch ahh, a day of quiet.

Okay, that one was borderline sexist but still, pretty funny.

This is the truth: I support women's rights to hold a good job, get equal pay (which they do), and pursue whatever career or goals they want out of life. That includes becoming a wife and mother, just as valid as having a career (more so, in my book). A woman can even run for president if they like (as long as she's not named Hillary Clinton).

The problem is the Women's March movement is claiming discrimination that no longer exists. They want us to believe that women in America are still second-class citizens, who do not get the rights or recognition they deserve. This, despite the fact that some of the most successful people in this nation are women. Women enjoy special scholarships, grants, and programs in this country.

So how are they subjugated?

The bigger problem in modern feminism is the ongoing war against men- what they call the dreaded patriarchy. This day without women is supposed to ultimately show men that we are nothing without women to take care of us.

But is that really true?

Thanks to the toxic influence of modern feminism, men are living quite well without the influence of women. I believe a good man needs a good woman in his life; both are most fulfilled and happy in healthy relationships. But in our modern society, men don't need women, thanks to feminism.

Because men aren't encouraged to get married early and have families, we've learned to be more self-sufficient.

Men don't need women to "take care of them" domestically; we've learned to craft our own spaces just fine. A single man in modern America is better off without a wife or kids. He can get a good job- working extra hard to achieve his success. Because he doesn't have kids, he has loads of disposable income, which he can spend on whatever he damn well pleases.

He can afford the best apartment and gadgets. He can while away the hours on video games, HD movies and entertainment, and virtually endless digital toys. Socially he can go out with his buddies, drinking into the long hours of the night, and have no end of people to interact with. Even sexually he can indulge in one-night-stands or fill his hours with pornography to satisfy his cravings. It's not the most healthy lifestyle, but trust me, it's one men can find fulfilling.

Can the same be said about women?

So sure, let feminists erase themselves from society. Let them withdraw from their jobs, relationships, and responsibilities. Let them show men how much they are not needed in their lives.

Because they've already been doing that for years.