Context Matters: In Defense of PewDiePie and Yiannopoulos

Let’s get one thing clear straight out of the gate: no, I do not support Nazis, anti-Semitism, or pedophilia. Now that that’s out the way, let’s tackle two stories that have been building over the past few weeks and the huge issue I have with how they have been covered in the news. 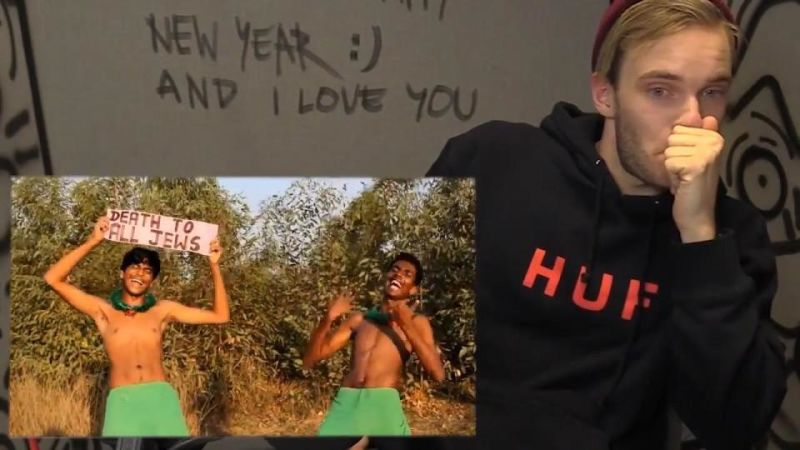 About a week ago, a huge entertainment story blew up. One of the largest YouTubers on the platform, PewDiePie- real name Felix Kjellberg- was booted from YouTube Red Series, and Google preferred along with getting dropped by Disney due to some seemingly anti-Semitic jokes he made. Well-known for his gaming videos, PewDiePie has since launched some amateur comedy videos for his audience of over 56,500,000 subscribers. Some of these included satire of Trump supporters, the alt-right movement, and of course, Nazi jokes. One of the ones exploding in coverage is his video experimenting with the site Fiverr- a network for individuals to pay other individuals $5 to do small or quick freelance tasks- where he tried to see how far people would go for some quick cash. What did he deem as the worst possible jokes? Jokes about Jewish people. He managed to get a guy to get dressed up as Jesus and say Hitler did nothing wrong, and another two guys to dance around, laughing while holding a sign saying ‘Death to all Jews.’ Pretty outrageous stuff. Is it funny? Personally, I find it distasteful, but everyone has very different senses of humor. And PewDiePie’s massive audience is a testament to the fact that at least some people enjoy it.

Then the mainstream media got wind of it. All of a sudden, this amateur comedian associated with huge companies was a racist and a Nazi. To be sure, there were white supremacist groups consuming his videos and posting their public support of PewDiePie. But the man himself made statements disavowing and breaking association with these groups, pointing out that they do not reflect his personal perspectives. Is he racist? Perhaps, but he has already gone on record speaking out against white supremacy several times. That’s more than our very own president, whose administration deliberately did not speak about Jews when remembering the Holocaust and who took until yesterday to call white supremacy a problem.

My favorite is this photo making the rounds in numerous articles: 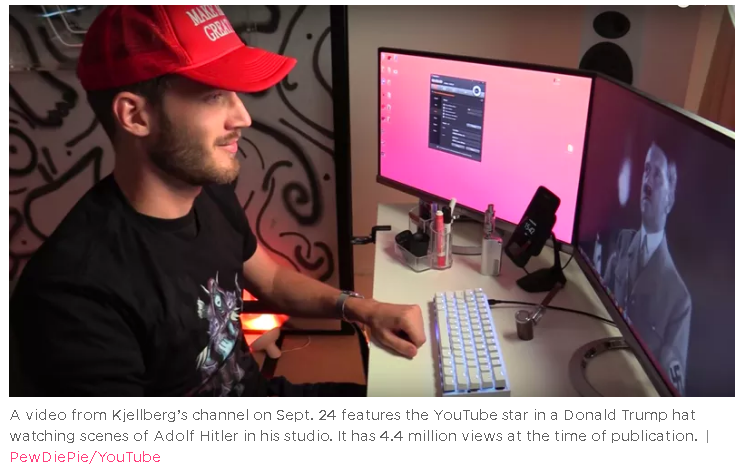 Most of these articles have some form of the caption above, and it took almost 20 minutes of searching before I found any mention of the reason behind the video. It took me about 30 seconds to find this video on YouTube, where you can easily discover that this video is actually making fun of the YouTube Heroes program, which involved viewers reporting what they perceived as inappropriate content. Fun fact: they could also get extra points for captioning Hitler videos- hence the video still from above. It was actually pretty entertaining, given the mocking of Trump supporters and their inclination to accuse the left of being snowflakes while simultaneously reporting any Trump criticisms as inappropriate content because they find all of it offensive. Yet none of that was ever shared with the majority of audiences. Instead, this twisted narrative of racism and white supremacy was created and shared instead.

Many traditional media outlets and even online sites painted PewDiePie as this out-of-control racist who was finally getting his just desserts by losing some large creative deals. And just a few days ago, the same happened to Milo Yiannopoulos. Two interviews from a year ago suddenly gained traction where Yiannopoulos seemingly defends and even endorses pedophilia.

I never thought I would ever be in the position of having to- ugh- defend the idiot, but the persecution about Yiannopoulos and these edited interviews is rather disconcerting. Look, I don’t want to defend this bottom dweller either, but we need to address this mainstream media hunt.

It seems to be a popular theme these days: mainstream media catches a whiff of a potential scandal, desperately grabs it and blows it right out of the water. In today’s mediascape, there is a ridiculously insane competition for eyeballs, and anything that can grab clicks and garner outraged discussion is gold. What these two stories do is even better for mainstream media too. It gives them an opportunity to bash and witness the fall of people involved in the platforms that are bringing about their demise.

Have no doubt, though- mainstream media still wields phenomenal power. Without their coverage, PewDiePie and Yiannopoulos would not be facing the consequences they are right now. Of course, anyone who claims that either of these guys’ careers is over should probably pull their heads out of the sand and join this century. Just because they may be experiencing some hate from the mainstream at the moment, it doesn’t automatically translate to career deaths. In fact, their audiences are still standing strong behind them, only now both of them are free to create content on their own now. Just yesterday, Yiannopoulos formally resigned from Breitbart, supposedly of his own volition.

Don’t get me wrong. I fucking hate every opinion Yiannopoulos spouts. I think he’s a disgusting individual; I’ve actually described him as a bottle-blonde shit sandwich to someone before. The problem is, you can’t just take what’s said at its word. The edited clips that have been making the rounds are just that: edited. The two interviews in question are much larger, and reveal much more than just the tidbits being played across media outlets. The original with Joe Rogan has the first set of damning remarks, but it started with Yiannopoulos speaking about his work in outing pedophiles. The Drunken Peasants podcast followed up on his answers there, which is where all the compiled bits are coming from. In it, Yiannopoulos makes a differentiation between pedophilia and hebephilia (the attraction to prepubescent children versus the preference for early adolescent children), then goes on to make a joke about how he wouldn’t give great blowjobs now if it hadn’t been for Father Michael. 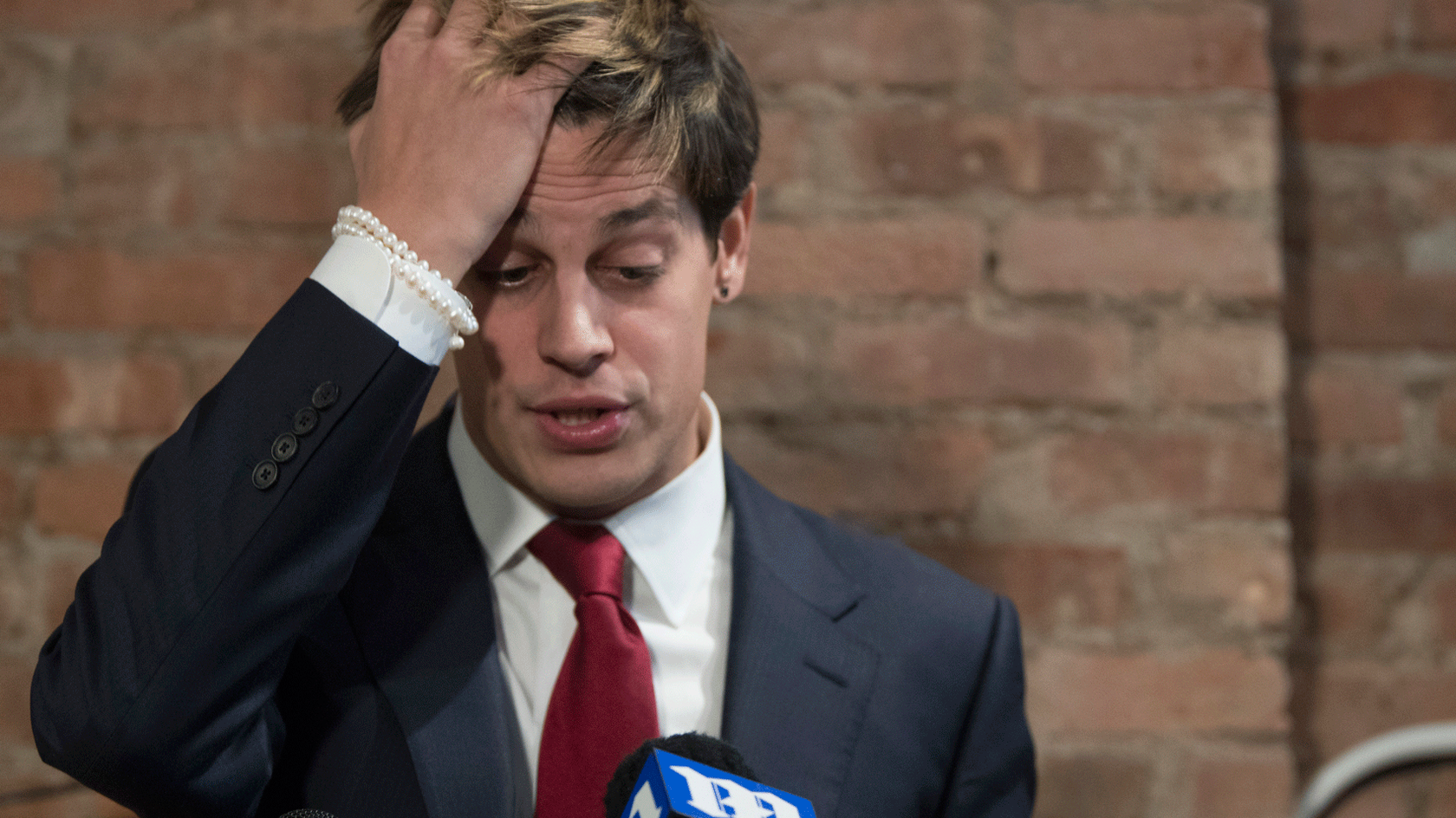 I 100% don’t support any of Yiannopoulos’ words. I 110% oppose his words. That being said, I also don’t want to sit here and criticize the victim of a sex crime on how they want to handle their experiences. As someone who delves into the world of conservative bash pieces daily, I actually was unaware of Yiannopoulos’ past until I started researching this story. But that’s the key thing: I started researching. More than half of the mainstream media coverage of Yiannopoulos add in his childhood abuse as a footnote, as opposed to addressing how this may be shaping his opinions and the subsequent interview.

I obviously don’t know Yiannopoulos, because if I did, I probably would have already broken his jaw several times over the insanely offensive things he says and writes. But without any psychological training, even I can tell he’s hairsplitting the differences between pedophilia and hebephilia because of his own abuse involving Catholic priests. And his discussion on older men in relationships with younger boys who are sexually mature most likely is a coping mechanism, wherein he has convinced himself he had the mental capability at 14 years old to be mature enough for that sexual relationship because he does not want to view himself as a victim. It doesn’t exactly fit his provocative, egotistical asshole persona he’s created for himself. Losing the book deal and speaking engagement was an interesting development though. I’ve often considered Yiannopoulos that drunken bigot in a bar, spouting out nonsense from the backwoods and olden times, and the conservatives and right wingers just ate it right up. They nurtured his outrageous stances, and even raised him as a martyr against the ‘overt political correctness’ they experience as a result of being forced to be decent to others. He was painted as fighting for free speech, and yet it looks like now they’re all for censorship. As Charlie Skyes put it, “Anti-Semitism, ok. Racism, ok. Alt-right, ok. Advocacy of pedophilia? Is THAT the bridge too far?” But that’s a different conversation.

We’re living in a world of echo chambers. We just want to hear back the same opinions and beliefs we already possess. And with so much information, technology, and social media warring for our attention, we want the shortest, most dramatic version of the facts as possible. We’re in a world of soundbites that can be watched while waiting for our lattes. I’m not arguing against this world of course. I mean, I don’t even watch videos anymore unless there are captions so I can watch without sound. But what’s severely lacking from these soundbites are critical thought and analysis. We need to stop simply consuming and swallowing whatever’s handed to us. Context is important. We need to take the extra 10, 15 minutes to look into a full story before mindlessly sharing.

I still think PewDiePie is an idiot, and Yiannopoulos is deplorable. I’m not defending their actions or their words. What I am defending is their ability to provide full context to their situations. I don’t agree with what’s been done, but at least take the extra five seconds to look into their backgrounds and where they’re coming from. Employing even that little bit of critical thought will open up a whole new world and help everyone stay relevant and well-informed.