In every industry, from Hollywood to politics, victims of sexual assaulter are making their voices heard in today’s #MeToo movement, including those that are admitted liars for political gain.

Last Thursday, a Hillary Clinton supporter by the name of Gabrielle Fane published a tweet calling on fellow leftists to falsely accuse Senator Bernie Sanders (I-VT) of sexual assault to force his resignation from office.

As screen capped by LawAndCrime.com, Fane publicly responded to the resignation of former Senator Al Franken, who himself was accused of sexual assault. Taking the opportunity to gain political capital against the candidate who ran against Hillary Clinton in the Democratic primary: 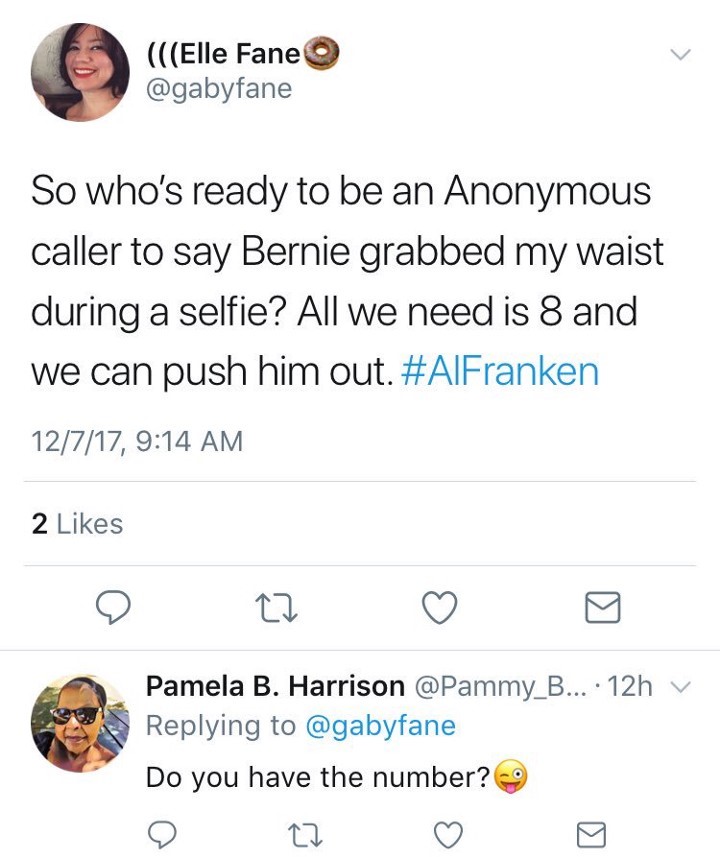 “So who’s ready to be an Anonymous caller to say Bernie grabbed my waist during a selfie?” Fane asked. The Twitter account, which has since become private, said “all we need is 8 [accusers] and we can push him out” of office. Ending the tweet using the “#AlFranken” hashtag, most likely to get more traction.

What people should draw their attention to is the donut emoji beside her name. Among the triple parentheses, which leftists use as a code to mean they’re Jewish or in solidarity with those against anti-semitism, the donut has become a secret anti-Sanders dog whistle among Democrats.

In early August, BuzzFeed published an article regarding the conflict between former Ohio congresswoman Nina Turner, a prominent activist for the Bernie Sanders–founded political activist group Our Revolution, and the Hillary Clinton controlled Democratic National Committee.

Turner, outside of the DNC headquarters, was petitioning support for policies taken directly from their “People’s Platform.” The DNC, the supposedly impartial organization which received money from the Clintons during their 2016 presidential campaign, rejected these Sanders-backed policies, however, offered to give the activists donuts and water for their effort.

“They tried to seduce us with donuts and water,” the former congresswoman told Buzzfeed. “They’re pompous and arrogant enough to say to the people, ‘You’re not good enough to be on our property — and, oh by the way, we’re just gonna hand you donuts and water over the barricade.’ That is insulting. Absolutely insulting.”

Turner’s comments spread into its own lackluster meme among Clinton’s left:

If you're proud of being a Democrat, add a donut to your name.

A notable example of this dog whistle in action is Jen Kirkman, the feminist comedian who got in on the fun while calling Sanders a “chaos agent paid by Russia” in now-deleted tweets, thankfully screen capped by Vice’s Eve Peyser.

I worked on this story for a year... and she just tweeted it out pic.twitter.com/Fr0uGFXJjQ

This shows the anti-Sanders bias behind Gabrielle Fane’s activist record, which she has since tried to hide since LawAndCrime.com’s original report.

Formerly going by the username @gabyfane, she has since moved to a private twitter account under @BeenDoxxed, claiming the website doxxed her with their article which detailed pro-Clinton, anti-Sanders and anti-Trump views which date back to the start of 2015.

The article then alleges she released a now private follow up tweet regarding the ethics of false accusations against Sanders. She supposedly wrote: “I’m sorry but I don’t think the things @SenFranken was accused of were the sexual assault and a few of the accusers were anonymous. I know you Bernie’s like to think things have always been the same but 10ys ago things were different.”

This false accusation campaign has received mixed reactions among the left. The account roflmaoism, who describes himself as an anti-fascist and ‘not a Sanders fan,’ condemned the original tweet for ‘trivializing sexual assault.’

I’m not even a Bernie fan but the fact that you trivialize the accusations of actual sex assault victims by encouraging false accusations, and dismiss the women who accused Franken speaks volumes about where you stand and who you enable.

Briahna Joy Gray, contributing editor for CurrentAffairs.org, hesitantly came to the defense of Clinton‘s base with the hashtag “#notallhillarysupporters.”

I can't believe I'm saying this, but in fairness to Hillary supporters, this is just one tragically misguided, self-owning, deeply disappointing woman. #notallhillarysupporters https://t.co/Gdw2F5xv0R

“I can’t believe I’m saying this,” she begins, “but in fairness to Hillary supporters, this is just one tragically misguided, self-owning, deeply disappointing woman. #notallhillarysupporters.”

This tweet was immediately followed by a response from @calleread, your standard lefty with bios showing support for single payer healthcare and black lives matter, who found Facebook posts refuting her first claim:

Sadly there’s a group of them but yes hopefully this is not representative of all of them, because ...https://t.co/Jm5VEA5Nx4

So I found myself back on the page after posting this thread, because I was too disgusted to stay on it yesterday and never read the comments. Here is the comments on the “I want sexual assault” post.. pic.twitter.com/DoDApivaF7

In the Facebook group The Fraud of Bernie Sanders, certain key members can be found proposing very similar plans of falsely accusing the independent senator: 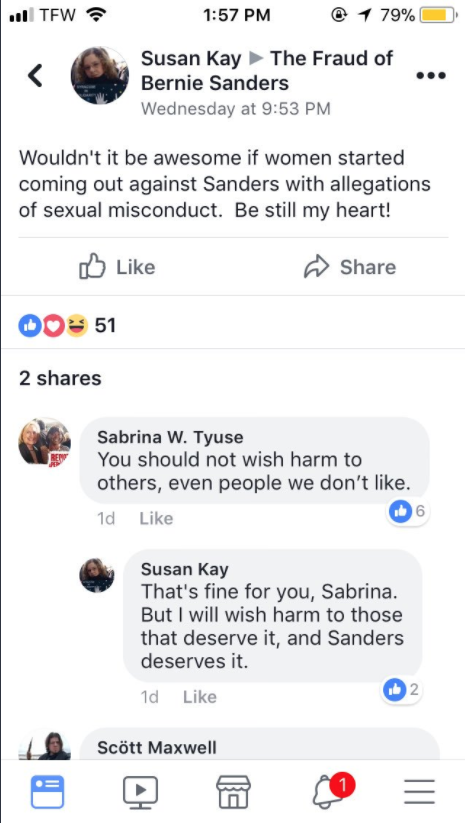 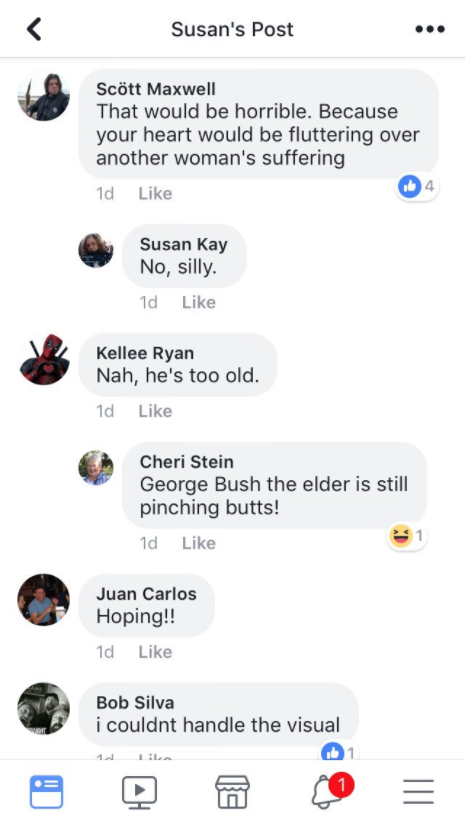 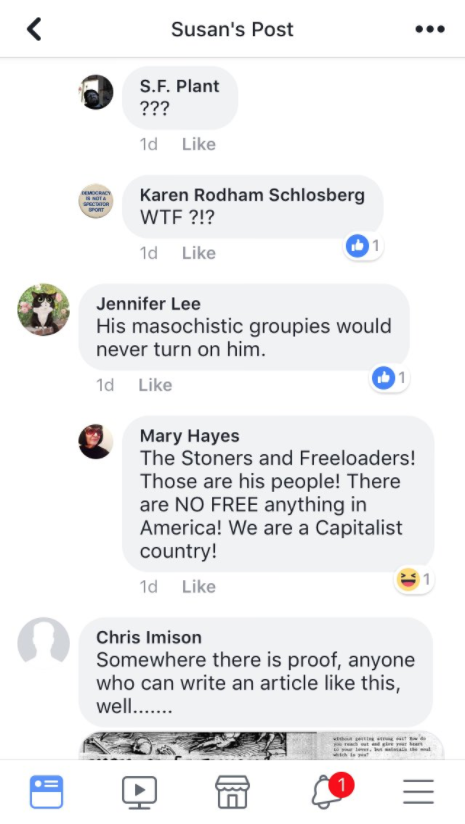 This is not the first time Clinton Democrats, in supporters and office, have tried to use sexual misconduct smears against Bernie Sanders.

Writer for theheavy.com, Stephanie Dube Dwilson, broke a story from last August regarding why pro-Sanders Facebook groups, which had thousands upon thousands of members, were suddenly removed.

In her report, she discovered that the groups, like “Bernie Sanders Is My Hero” and “Bernie or Bust 2016” were inundated with fake links and pornographic photos from throw-away troll accounts, some positing illegal pedophilic material.

Nothing has come out about who owned these troll accounts, however, contributor for The New York Daily News, Shaun King, reported on similar troll account tactics employed by the pro-Clinton Super PAC, Correct The Record.

Headed by David Broke, a vocal Clinton supporter during the 2016 primary and general elections, King reports the Super PAC launched something called “Barrier Breakers” — which he describes as “an online mob of paid trolls designed to attack any and every person who says one cross word about Hillary Clinton on Facebook, Twitter, Instagram, Reddit, or elsewhere.”

While it sounds like a conspiracy theory, King sourced the Correct The Record website (which has now been deleted) which laid out the program in full, detailing how over $1 million in donations were put behind trolling efforts.

All of this speaks to the dangerous lengths in which partisanship can seep its way into the discourse, and as King said himself back then: “It’s a real mess.”