Alex Jones' Custody Trial Is The Most Surreal Thing Ever

UPDATE: Since the publication of this article, Alex Jones subsequently his court case, along with full custody of his children.

As you may or may not know, far right-wing pundit and walking hilarious quote machine Alex Jones is mired in a legal battle with his ex-wife Kelly for custody of his three children.

As the Jones’ court battle began on April 18th, it became immediately clear that Alex Jones himself, both on the airwaves and off, would be the primary topic of discussion. Those that have fallen into a YouTube wormhole of Alex Jones’ most unhinged moments have surely wondered ‘Is this guy real?’. The continuing stream of preposterous quotes which have emerged from the custody hearing have provided a definitive answer.

Alex Jones’ on-camera persona seems to be exactly who he is, and his very real existence as a father and former husband provide a hilarious, if not sad, image of the man away from work that few of us had considered before the custody trial became national news.

Fortunately, we did not have to wait long for the Twitter reporters to begin leaking the comedy gold.

Before we get to the good stuff, I politely request that you read these quotes, whether in your head or aloud, while employing the gruff, curt, three-pack-a-day timbre of the Conspiracy God himself. Trust me, it’s the only way to get maximum humor out of the exercise.

And please, for the love of all things holy, try to suppress the reality that Info Wars reaches over 4.7 million people monthly, many of whom take Jones’ assertions very seriously.

Being the boisterous public figure that Jones is, his attorneys anticipated that his trove of free, online videos would be parsed and paraded by Kelly Jones’ attorneys. In anticipation of this, Alex Jones’ attorney urged that relevant parties take these “performances” with a grain of salt:

“This is political satire, it’s part of his show, it has nothing pertaining to the parent-child matter,” said his attorney, Randall Wilhite.

Those that have seen Jones know that there must be a modicum of truth to what he espouses, whether it be a 9/11 inside job conspiracy or his fuming rage toward leftists. Nobody who takes such bold stances over such prolonged periods with such vigor as Alex Jones has merely laughs them off later as performance art. You can’t convince me otherwise.

But, in the most outrageous of instances, perhaps we should give him the benefit of the doubt. After all, can you imagine Jones unleashing this tirade on one of his kids because they let a “Dad, you’re being a real Russian foreign agent right now!” slip out during a heated exchange?

Well, with most parents, obviously not. But this is Alex Jones, and those on-air fits of unbridled outrage just feel too real to dismiss. When it comes to this trial, no allegation is too absurd to discount.

After his attorney’s statement about Jones simply engaging in performance art leaked, Alex himself assured his fans that his lawyer was the one doing performance art, in court:

“The media is deceiving everywhere. I 110% believe what I stand for. We’re changing the world with you. The globalists are panicking and trying to shut us down and calling us fake news, just like Communist China does because we’re kicking their ass.”

So, without further ado, here are the most golden quotes and exchanges from the trial so far. Take them at face value or with a grain of salt, but please don’t take them to heart.

Jones on The Chili Defense:

When asked for confirmation that chili does indeed adversely affect Jones’ memory, he doubled down:

Only a big bowl, though. Classic Goldilocks effect. Bowl has to be just right not to affect the old noggin. 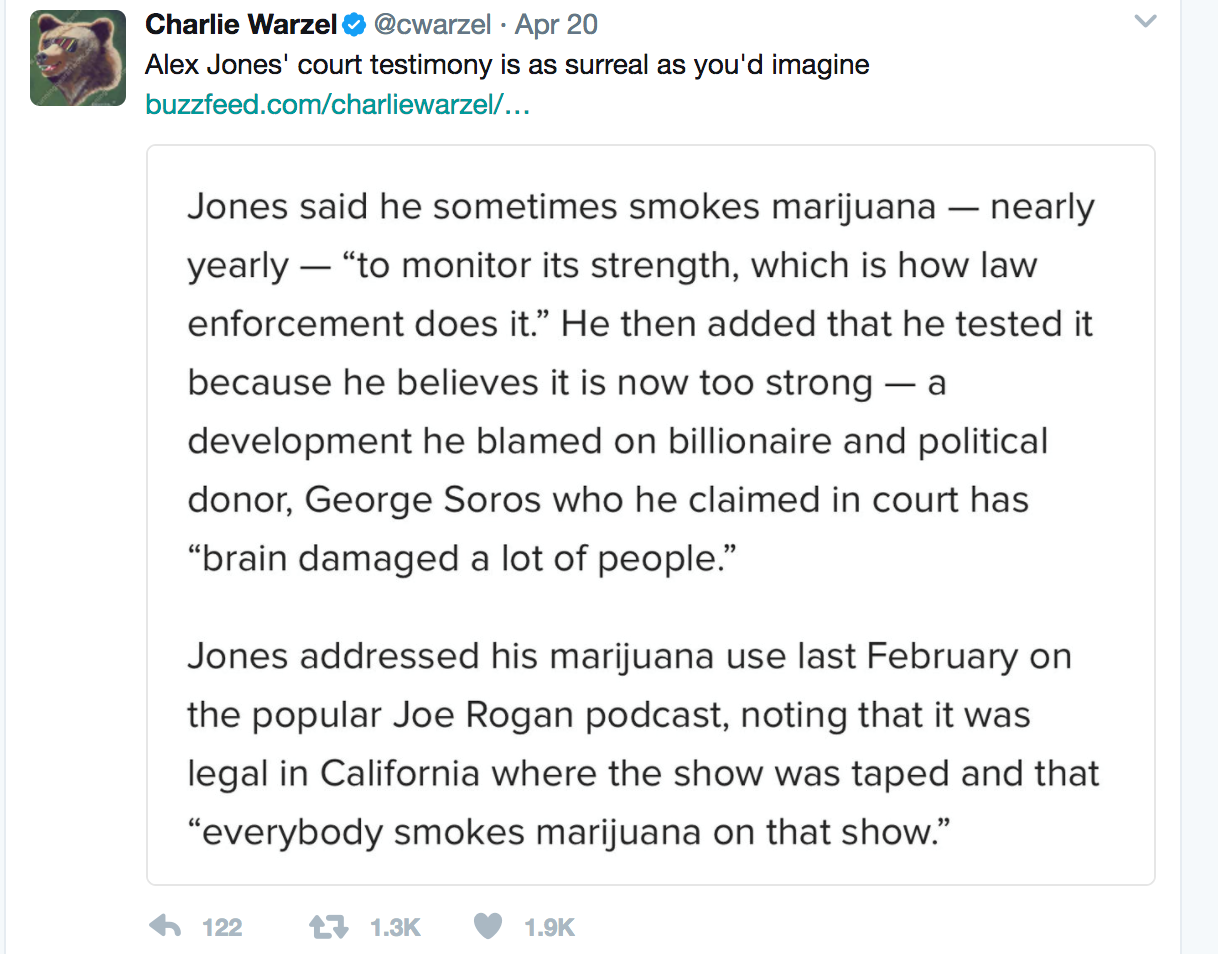 A chef wouldn’t give advice on cooking without testing his own food, would he? This makes sense. No need to question the logic here.

In case you’re not convinced of his distaste for the restrictive nature of clothing, here are some more examples, at least one of which was used as evidence in court:

Honestly, I don’t see how it is an indictment of his parenting skills, but a mid-life crisis is not out of the question.

“A man without a calendar oriented plan is no man at all.”- Alex Jones, probably.

Jones on His Sexual Prowess as a Teen:

Jones on Gaining His Children’s’ Admiration:

How, in life, do we rate a man if not by the popularity of his memes?

Accuse Alex of many things, but don’t call him a perjurer.

Jones on Media Coverage of the Hearing:

Child custody hearings are not normally fodder for entertainment and tabloids, and I truly feel bad for the children of Alex and Kelly Jones.

With that said, this trial is a classic case of truth being stranger, and more hilarious, than fiction ever could be. While we want it to end, we can’t wait for the next batch of Jones-ian quotes.